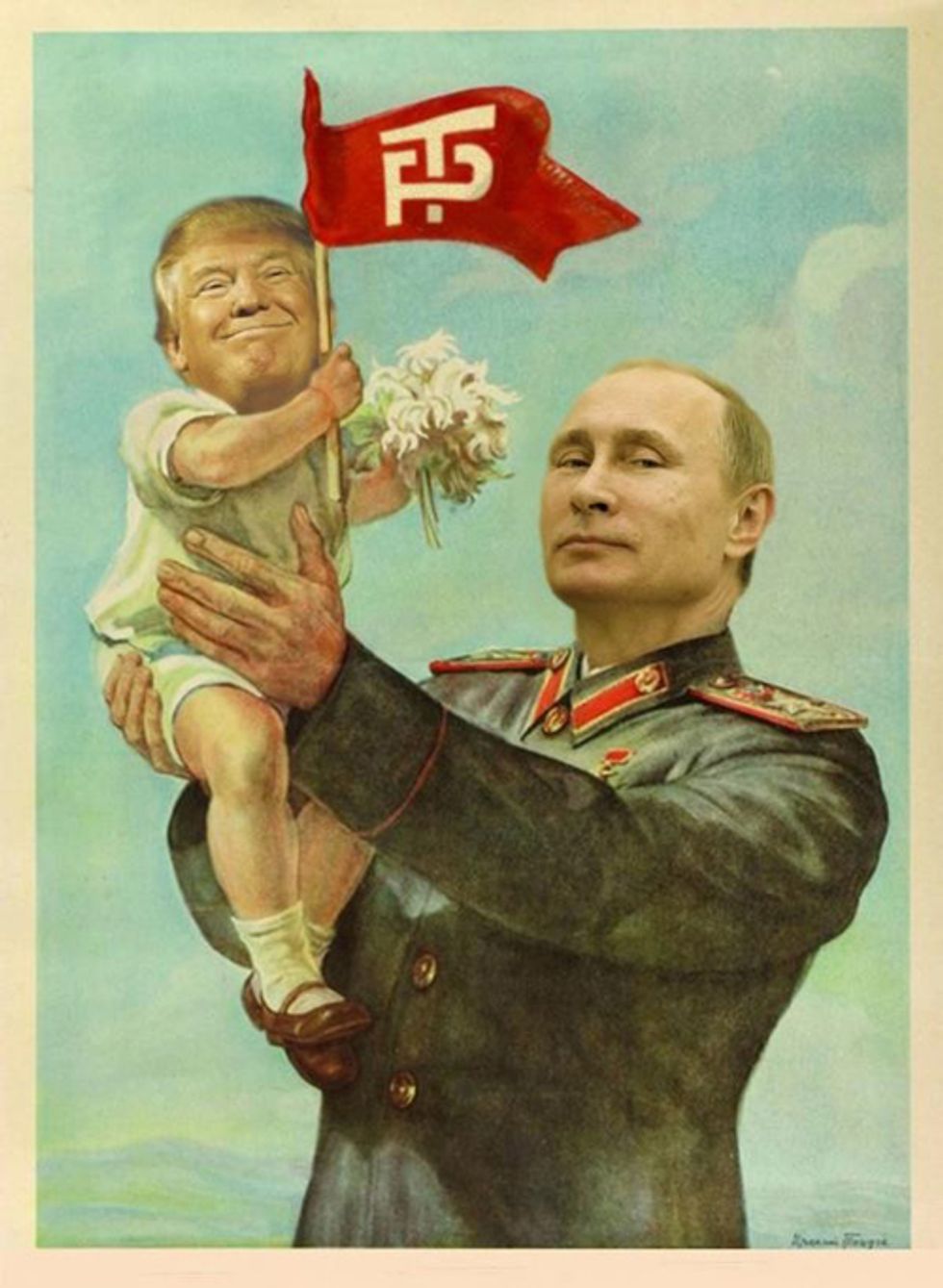 Donald Trump frequently proves beyond a shadow of a doubt that he's innocent of all charges of colluding with Russia or obstructing justice by saying, "No collusion. No obstruction. YOU'RE THE COLLUSION OBSTRUCTION." And that settles that question. But suddenly, over the last month or so, Fox News idiots have decided it would be A-OK with them if Trump colluded with Russia, a thug nation with an autocratic ruler who is #NotOurFriend, because how is that even a crime?

This weekend, Brit Hume, the resident Fox News basset hound who is actually a wingnut, but he doesn't literally take shits on the news desk, therefore he is "serious," said it would be "alarming and highly inappropriate" if Trump and Pals colluded with Russia, not that there's any evidence of that, but it wouldn't be a crime. Sean Hannity, who DOES literally shit on his desk on live TV (ALLEGEDLY! FIGURATIVELY!), went even further Friday on his radio show:

SEAN HANNITY: I never understood it anyway. What was the collusion? That maybe somebody in the Trump campaign talked to somebody in Russia because Russia supposedly had the information that Hillary Clinton had destroyed on her server when she committed a felony and tried to cover up her crimes? And that they might say as a Trump campaign representative, "wow you have that? Tell the American people the truth. Let them see it themselves, release it." Is that a crime, to say "release it"? To show the truth? To show damaging information?

Yeah, no biggie! It would be totally cool if Donald Trump was like "DO IT" when/if Vladimir Putin called him on the Obamaphone and said, "I am to be having damaging information on American bitch Hillary Clinton! But should Vladimir make Snapchat to Julian Assange to have him release hacked Hillary campaign emails, like maybe 30 minutes after American media leaks Donald Trump Grab Them By The ки́ска videotape?"

At the end of May, Fox's Gregg Jarrett also said, "You can collude all you want with a foreign government during an election." So! The brightest shining journalism lights at Fox News have weighed in and said that even though Trump totally didn't collude with Russia to steal the election, it would be cool if he did. Wonder what they're laying the groundwork for? Is there NEWS coming?

Politifact directly rebutted Jarrett's claims by talking to legal experts, one of whom, Nathaniel Persily from Stanford Law, said this:

"A foreign national spending money to influence a federal election can be a crime," Persily said. "And if a U.S. citizen coordinates, conspires or assists in that spending, then it could be a crime."

"Collusion in a federal election with a foreign entity could potentially fall under other crimes, such as against public corruption," Douglas said. "There's also a general anti-coercion federal election law."

Another expert said the "F" word, which in this case is not "fiddlesticks," but rather "fraud":

Another election law specialist, John Coates at Harvard University Law School, said if Russians aimed to shape the outcome of the presidential election, that would meet the definition of an expenditure.

"The related funds could also be viewed as an illegal contribution to any candidate who coordinates (colludes) with the foreign speaker," Coates said. [...]

"Under that statute, it is a federal crime to conspire with anyone, including a foreign government, to ‘deprive another of the intangible right of honest services,’ " Coates said. "That would include fixing a fraudulent election, in my view, within the plain meaning of the statute."

Golly, we sure are glad Politifact did the very hard work of spending a few minutes on the phone with actual Law Sexperts, instead of just relying on what Fox dicknuggets say.

Apropos of everything, we should point out that Robert Mueller's investigation into all things Trump-Russia has specifically been following the money. BIGLY.

Jonathan Chait notes at New York magazine that certain evidence of collusion between Trump and Russia is right in front of all our faces, like how Trump's longtime BFF Roger Stone seemed to know about the Russian hacking of the Hillary Clinton campaign beforehand, and how Trump totally encouraged Russia to hack Hillary Clinton while the campaign was going on.

OK, so we know those things for sure. But what about things we might not know about yet? For instance, in the Steele Dossier, some of which has been confirmed, there are allegations that the Trump campaign actually was involved in PAYING THE HACKERS. Would that be bad? What about if the Trump campaign established some sort of financial quid pro quo in exchange for lifting Russian sanctions? Is that what some of those meetings between Russian ambassador Sergey Kislyak and LITERALLY EVERY TRUMP PERSON (including Jared Kushner and Michael Flynn!) were about? The dossier alleges that a possible deal (because Trump people make the best deals) included the sale of a 19.5% percent stake in Russian oil empire Rosneft to (???) in exchange for lifting sanctions. Strangely enough, a 19.5% sale to (???) happened just after Trump's election.

And guess who is currently trying to piss all over the Republican Congress's plan to levy yooge new sanctions on Russia? That's right, it's the Trump White House!

We don't know for sure, but we reckon Robert Mueller is investigating all these things and more, and we doubt he's just compiling a list of things Trump did with Russia that are TOTALLY OK AND LEGAL, even if Brit Hume finds them unsavory.

But keep saying Trump colluding with Russia is totally cool and legal, Fox News fuckstains. Maybe you can trick Trump into tweeting a confession!

Wonkette ain't got no ads, which means our bills are paid 100% by YOU! If you love us, click below to help us out!