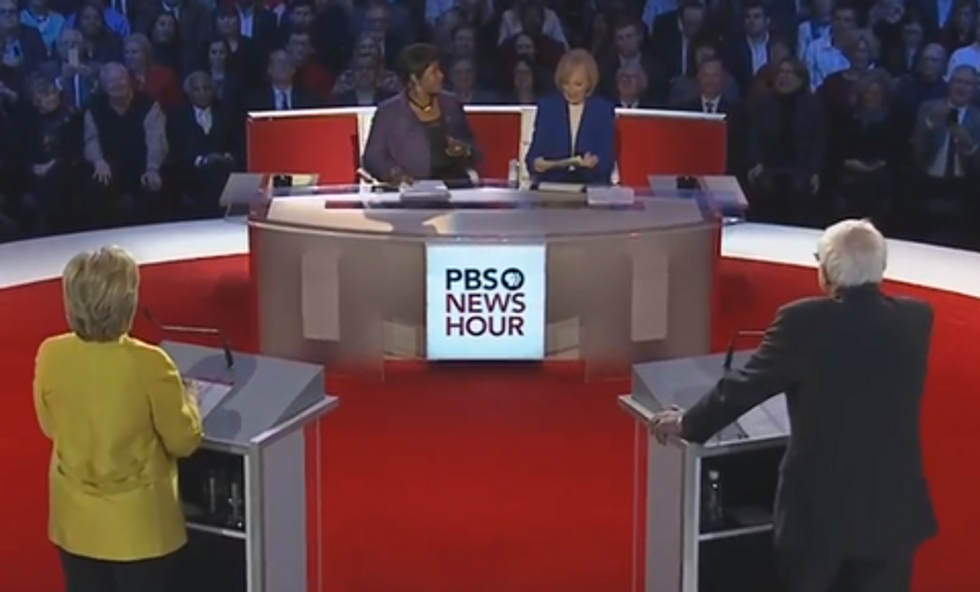 [contextly_sidebar id="u159d3hP4KOPLjJ4lkXvbEzQelG9wAQK"]In between desperately begging for money and plugging its report on the ancient art of Albanian Weevil Calligraphy, PBS took some time out of its busydebate schedule Thursday night to ask both candidates the question Democratic primary voters surely care about more than any other: what's with all this big government you guys are such fans of, huh?!

We're not entirely sure what the hell happened. Why were moderators Gwen Ifill and Judy Woodruff of the opinion Democrats give even the tiniest semblance of a shit about the terrifying specter of Big Gub't? Can the police please go check if Grover Norquist has been holding their families hostage? Because that's the only explanation we can come up with for this, the very first question either candidate was asked coming out of opening statements:

WOODRUFF: And, welcome back to this PBS Newshour debate, Democratic debate, here in Milwaukee. Let's get right to the questions.

Senator Sanders, to you first. Coming off the results in Iowa and New Hampshire, there are many voters who are taking a closer look at you, and your ideas, and they're asking how big a role do you foresee for the federal government? It's already spending 21% of the entire U.S. economy. How much larger would government be in the lives of Americans under a Sanders presidency?

What the hell is this shit? You're asking questions of Bernie Sanders and Hillary Clinton, Judy, not John fucking Kasich.

And she wouldn't let this damn subject go! After Sanders basically (rightly) ignored the question and pivoted to his plan to convince Congress to give all Americans free health care and free college through the magic of dance, Woodruff was back at it:

WOODRUFF: But, my question is how big would government be? Would there be any limit on the size of the role of government...

To his credit, Sanders basically seemed to all but ask "what the hell, Judy?"

SANDERS: ... Of course there will be a limit, but when today you have massive levels of income and wealth inequality, when the middle class is disappearing, you have the highest rate of child poverty of almost any major country on Earth. Yes, in my view, the government of a democratic society has a moral responsibility to play a vital role in making sure all of our people have a decent standard of living.

Oh, but if you thought Bernie would be the only one facing dumbass questions about the evil scary specter of the Tyranny of God-Dictator Obamamagne I, you thought very wrong. If anything, Ifill outdid Woodruff with ... whatever the fuck this was:

Secretary Clinton, you might -- you also have proposed fairly expansive ideas about government. You may remember this pledge from a State of the Union Address at which I believe you were present, in which these words were said: "The era of big government is over." You may remember that.

When asked your feelings about the federal government this week, 61 percent of New Hampshire Democrats told exit pollsters that they are angry or at least dissatisfied. Given what you and Senator Sanders are proposing, an expanding government in almost every area of our lives, is it fair for Americans who fear government to fear you?

"Secretary Clinton, the superstitious villagers who fear government overreach are afraid you have entered into a pact with the dark one. Is it fair for them to throw you in the river to see if you float?"

And with that, it was thankfully over, and for the rest of the evening we had a thought-provoking discussion of issues that really mattered and -- OH FOR SHIT'S SAKE:

WOODRUFF: Welcome back to the Democratic presidential debate. Before we return to our questions, we have a follow-up question from our Facebook group. And it is to Senator Sanders.

Senator, it comes from Bill Corfield. He is a 55-year-old musician from Troy, Ohio. And he asks: "Are there any areas of government you would like to reduce?"

"Senator Sanders, let's take a question from Facebook, from Linda in Toledo: HI BERNIE #FEELTHEBERN WAT DO U THINK OF MY CAT MR. MITTENS?" Yes, let's take Facebook questions in a major political debate, because "CAN JET FUEL MELT STEEL BEAMS?!" is absolutely something serious political candidates should have to address.

(We're being unfair here. Later in the debate, Robert from Massachusetts, another Facebook contributor, asked an excellent question that we all enjoyed very much. We see you, Robert! The rest of you are still terrible.)

[contextly_sidebar id="w19QD7Vip5tgPLTxtGDyZhJv5PcCOieo"]While there were a lot of good questions asked at Thursday's debate (Hillz' apparent boner for war criminal Henry Kissinger, who loves Barry O more, who is most qualified to be President of The Income Inequality States Of Free College Health Care, etc.), an early and weirdly repetitive focus on big government did no one any favors.

So maybe next time, let's ask questions about subjects Democrats actually care about that never seem to come up in these debates. Like abortion and gay rights and gun control (which Hillz seems pretty ready to bring up, though the moderators never seem to) and climate change, maybe? We're just saying, those seem like issues we should probably discuss at some point.