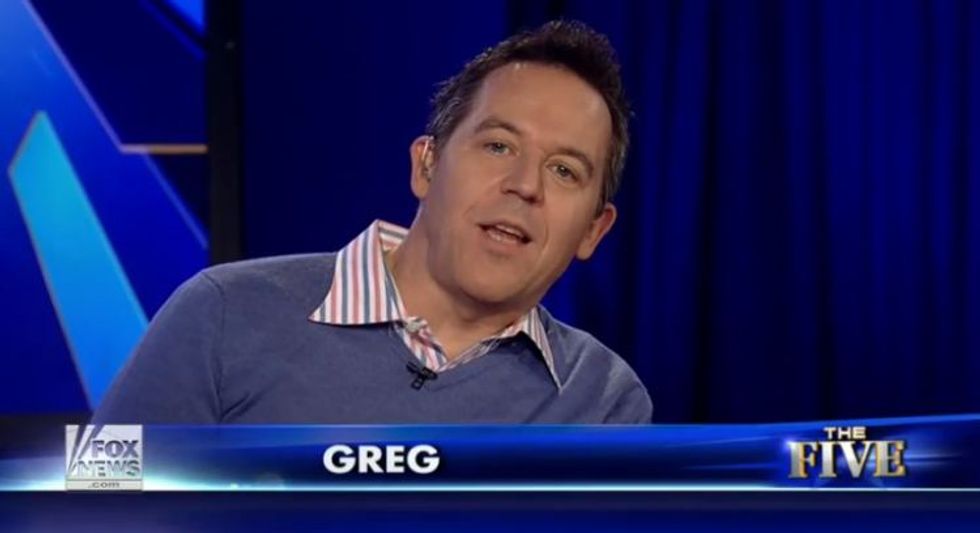 This is what Greg Gutfeld looks like when he thinks he just made a point.

Yr Wonkette, as you know, is a pro-life mommyblog. HEAR US OUT. We're pro-life in the REAL, grown-up way, the one where abortion is legal, and women should have a right to do with their living bodies as they please, and we believe in doing all that we can to support living, breathing human beings. Also, fetal tissue research is VITAL to finding cures for cancer and developing vaccines and all sorts of other things. Heck, it's so great that wingnut presidential candidate Ben Carson used to do it all the time! So, considering these facts, it's very PRO-LIFE to support women in their choices to donate fetal tissue after abortions, so that tissue can be used to SAVE THE WORLD!

But Greg Gutfeld on the Fox News program "The Five," he is not pro-life in the grown-up way. He doesn't think ladies should have the right to donate fetal tissue, because he just wants everybody to die of Ebola and cancer or something, we guess, HOW RUDE:

I don't really think she SHOULD have consent. This is not an organ to be donated. You do not, you have, this is where you have to separate the pro-choice argument from this idea of fetal dismemberment. It's a dishonest leap to put them both together to say that because I have a right to do this, I can also make a decision what to do with the cadaver. No, you don't!

Pick one, ladies! Curing cancer or having 'bortions, but you can't have it both ways, BECAUSE GREG SAYS.

Here's more word salad, as the man seems to have been briefly possessed by Sarah Palin during this discussion:

It's like saying I'm pro-Second Amendment, which also means I have the right to shoot my gun wherever I want. No, you're for the right, but that doesn't allow you these other things. Basically what we've done is we've relegated dead babies ...

Women should have to go to classes to learn how to be responsible abortion-havers, just like you do with guns. Have the abortion, but don't wave that thing around, you'll put somebody's eye out!

At this point, Geraldo Rivera cuts in as, for maybe the first time in his life, the voice of reason:

Are you saying that women should not have the ability to consent whether or not their aborted fetus is used for research? That's crazy! So, I'm an 18-year-old rape victim or incest victim, and you're saying the person who aborts my fetus has the right to decide without asking me, what to do with it?

Then they fight for another minute and a half and it's loud and very Fox News, in that it adds absolutely nothing to intelligent discourse. Gutfeld screams about how it's NOT FAIR to bring up rape or incest, because he supports abortion in those instances! Wait, were we even talking about whether abortion should be legal? No, we were not, and there is the lightbulb AHA! moment, which illuminates this entire stupid debate.

Gutfeld and all the other wingnuts yammering their maw holes off about Planned Parenthood selling fetus parts to the highest bidder are not actually having a discussion about "Should we throw this stuff in the trash, or should we let researchers do science to it to save people's lives?" He believes all abortion is murder, but begrudgingly says fine, if you're raped or incested, you can have one. But otherwise, he does not believe it should be legal, therefore any good that comes from it is, by definition, not good, because he doesn't live in the real world.

And hell, the very idea that, again, aborted fetuses could possibly contribute to life-saving treatment for millions of people, is probably so far outside what his ideology will allow his tiny, stupid brain to understand, he will literally sit there and say it's better to throw the fetuses in the dumpster, rather than letting women choose to let their terminated pregnancies contribute to a greater good for the world.

In related news, Gutfeld and the human leg cramps he does television with are very upset about this one Funny Or Die video, where ladies tell heartbreaking stories about what Planned Parenthood did to them, like give them good treatment or make recommendations for prenatal care. This is just rude, liberal DEVIL TALK, because what about the dead babies, HUH? Everyone knows abortion jokes are only funny when "pro-lifers" do it.

Gutfeld actually says, we are not kidding because we could not make this up:

It’s called Funny Or Die, but fetuses don’t have that choice because they’re already dead. It’s a shame that Funny Or Die didn’t exist generations ago because they would have been great propagandists for Stalin.

Those fetuses are real bad at the Cake Or Death game too, and that is probably just like Hitler. You can watch video of Gutfeld and the other colon polyps whining about the funny video if you hate yourself, or you can just watch the funny video, because it is Friday and fuck it: