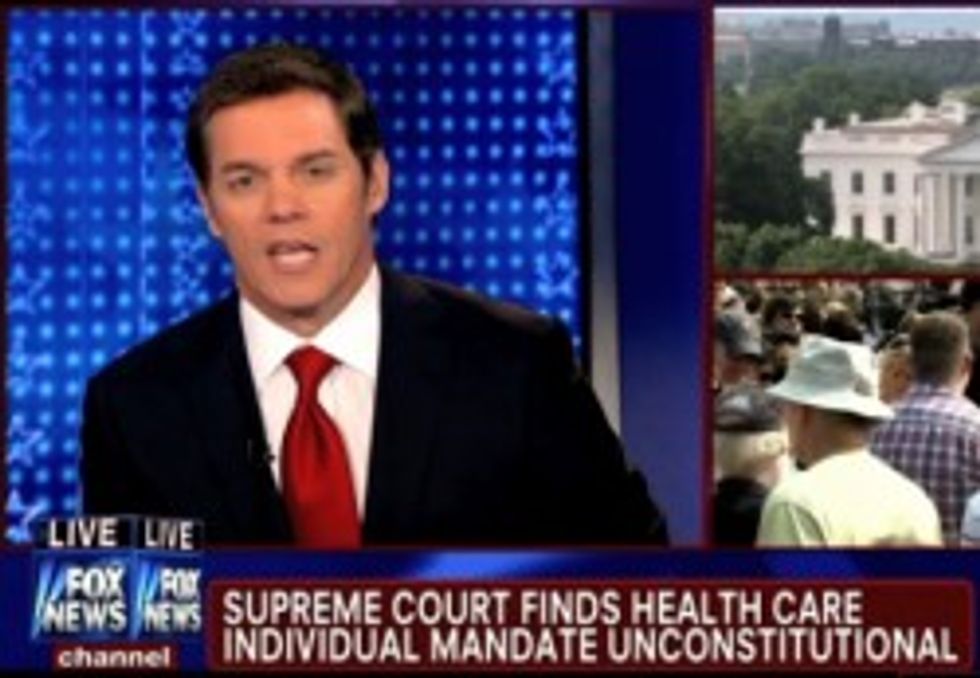 Fox News tried, it really tried, to make lies true, and to expect something so thoroughly, in the deepest crevasses of its soul, that when hearing the opposite it, it just heard its wish, its dream, namely for the Obamacare individual mandate to be ruled unconstitutional. But it was, oddly, upheld! So now The Worst (CNN and Fox News) feel they have to explain themselves. Not that it wasn't confusing all around. But Fox's non-explanation is that it HEARD AND ALSO READ that the mandate was unconstitutional. And anyway, they didn't suck at accuracy nearly as much as "one other cable network."

CNN released this statement on its eff-up earlier, and it did actually include the word "regret." Here's Fox News's statement:

We gave our viewers the news as it happened. When Justice Roberts said, and we read, that the mandate was not valid under the Commerce clause, we reported it.

Fox News's slogan shall henceforth be: WORDS, SAID AND READ.

Bill Hemmer even added, be patient as we work through this. Then when we heard and read, that the mandate could be upheld under the government’s power to tax, we reported that as well—all within two minutes.

So, bottom line: Fox News is FAST, FAST at telling lies, FAST at correcting them!

By contrast, one other cable network was unable to get their Supreme Court reporter to the camera, and said as much. Another said it was a big setback for the President. Fox reported the facts, as they came in.

And by "as they came in," they mean that the beginning of a sentence can be true until such a time as the possibly contradictory end of the sentence is reported to them. This is how news works, people. Now you know. [Politico]