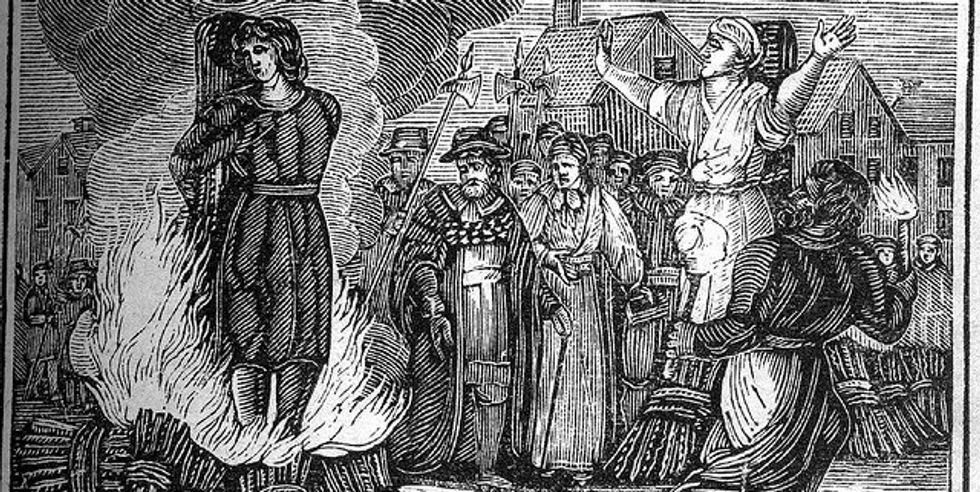 [contextly_sidebar id="TzEh7eUft8tJelg5xB3bsdpAcGOmSxxi"]But it was not so good over at Fox News. Fox, like the rest of the rightwing anti-woman world that has an awkward and estranged relationship with reality, has been demanding investigations into these oh-so-damning videos, pronouncing Planned Parenthood ipso facto prima facie full-on obvs GUILTY! because of "a series of undercover videos that appear to show the organization profited from fetal organ sales." Except not, as we all know.

On Monday night, Megyn Kelly invited Fox News Senior Legal Gasbag Judge Andrew Napolitano to whine and cry and stamp his feet and shake his fists about the indictment of Center for Medical Progress founder and bipedal trash heap David Daleiden and his fellow videographer Sandra Merritt, and to lawsplain what it all means:

This means that a political prosecutor has injected herself in a very serious issue about whether or not Planned Parenthood was profiting from the abortion of babies by selling body parts.

Oh really? Harris County District Attorney Devon Anderson (a Republican appointed by former indicted Gov. Rick Perry, by the way) injected herself into the serious issue of persecuting Planned Parenthood by following the totally unbiased, non-agenda orders of virulently anti-choice Republican Lt. Gov. Dan Patrick to git them baby-killers at Planned Parenthood. But she didn't do that, did she? She got it all wrong by refusing to find Planned Parenthood guilty and instead uncovering evidence of all these other crimes by the "pro-life" activists, HUH.

Why, just look at her, being all political:

Pffft. The evidence led her in the wrong damned direction because she was supposed to stone-cold murder Planned Parenthood, in a court of law. Didn't she watch the videos? Judge Napolitano did:

And anybody that watches these tapes can come to their own conclusion. I submit that if you watch them you will conclude that they did sell body parts and were willing to sell them in the future.

Thus, the indictment of Daleiden, instead of Planned Parenthood, can only mean one thing: that Daleiden is a lying sack of pus criminal (allegedly blah blah) who created fake government documents in an attempt to entrap Planned Parenthood (that's illegal), and he also tried to buy fetal tissue (that's illegal too, as we've been told by Fox a thousandteen times!), and his ass should go to prison forever?

Ha, don't be stupid, this is Fox News. Help us come to the right conclusion, Fox:

KELLY: So does this sound like a political hit job? Or what is this?

NAPOLITANO: Absolutely. This is a political hit job.

Blood-stained swizzle dick Daleiden is bitch squealing that he is but a humble journalist who simply "uses the same undercover techniques that investigative journalists have used for decades in exercising our First Amendment rights to freedom of speech and of the press, and follows all applicable laws." Except for wrong and nuh uh, and fuck you, pal, while we're at it. Real journalists do not make deceptive home videos with stock footage for the explicit purpose of trying to shut down a provider of women's healthcare because ladyparts are ewww and icky.

Meanwhile, Judge Napolitano is hitting all the Fox shows to make sure everyone understands the political hit job ordered by the state's most powerful elected anti-choicers is the wrong kind of political hit job:

I'm beginning to think that it is a political hit job on the people who did the investigating. So you have bonafide journalists assuming identities, pretending to be medical ethicists or people in the business of dealing with body parts going to Planned Parenthood saying, all these abortions, are you really selling the body parts? Well, yeah, we are.

Sure, except that none of the anti-choice activists involved with the Center for Medical Progress are "bonafide journalists," and also except that no one from Planned Parenthood ever said they sell body parts, because of how they don't. But go on, Judge:

Now, what does investigate mean? You empanel a grand jury of 23 people. You tell them who your target is.

Right, that's how the justice system works. The prosecutor tells a grand jury, "We're trying to go git Planned Parenthood, so do that," but oh no, the Republican "political prosecutor" didn't do her job right, did she? Nor did the grand jury:

The grand jury does not turn around and indict your witnesses, the people who brought you the case, without the prosecutor wanting this to happen. So why would this prosecutor appointed by Governor Perry, a former judge, a Republican woman, why would this prosecutor want to do this, other than to send a message like, I might be a Republican, but leave Planned Parenthood alone? Leave it alone -- they're using tax dollars to kill babies and sell their body parts.

Clearly, the prosecutor is a secret feminazi baby-hating double agent mole, out to protect and enable Planned Parenthood so it can keep using your tax dollars to eat baby parts for lunch, mmmmm delish!

Or. Or! Maybe "pro-life" extremists who are hell-bent on denying healthcare to women and are willing to commit crimes, and aw heck, even MURDER, to try to make doctors look guilty of doctoring should go fuck themselves with a rusty coat hanger and leave ladies and their ladyparts medical providers alone. Or else they just might find themselves at the sharp end of the justice stick.