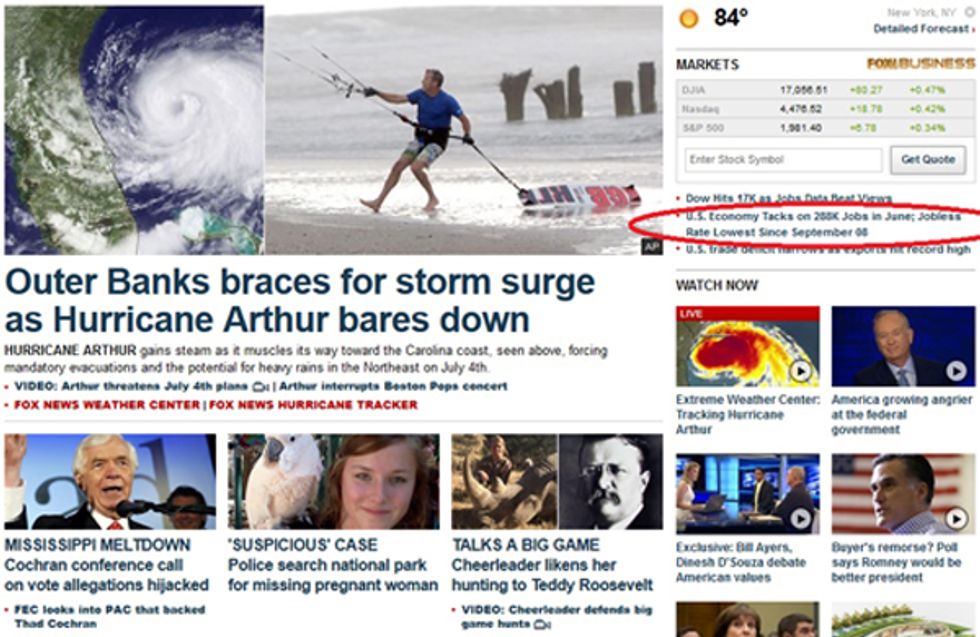 So, hey, some pretty good employment news today: The June jobs report from the Bureau of Labor Statistics shows that the economy added 288,000 jobs in June, and the unemployment rate dropped from 6.3% in May to 6.1% last month. That's the lowest unemployment rate since September 2008. So, hooray for Our Economy, unless of course you're Fox News, in which case you really need to make it look terrible.

Fox gave the story an entire 27 seconds of coverage Thursday, noting that this was the fifth straight month in which the economy grew by more than 200,000 jobs, but tempered that by solemnly noting that the "real” unemployment rate, which includes those who are underemployed, is 12.1 percent, so STOP THINKING THINGS AREN'T TERRIBLE. And then they segued into a story about how people really really wish Mitt Romney were president.

And on the Fox News homepage, the story was demoted to a teensy little sidebar mention, and the addition of 288,000 new jobs was described as kind of a sad little remnant: "U.S. Economy Tacks on 288K Jobs in June; Jobless Rate Lowest Since September 08," which must have just really hurt to admit. The story tacked on to that hed is, at least, a perfectly conventional bit of economic reporting, which is fine, because nobody reads the stories anyway.

On the bright side, no one on Fox is accusing the White house of lying about the unemployment numbers this time around.