Fox News: Science Is A Hoax That Steals Our Freedom And Driving Privileges 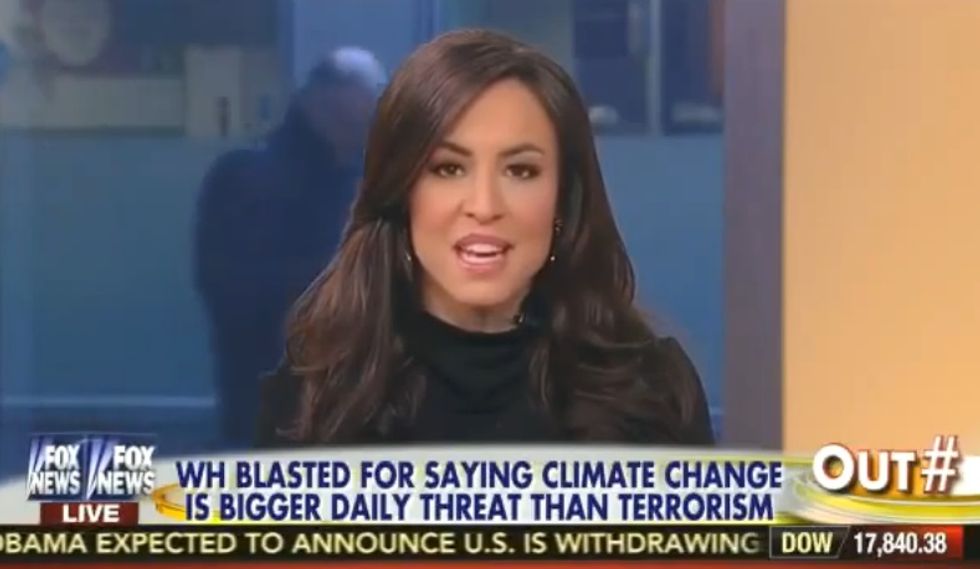 Fox News found yet another reason to declare President Barack Obama totally DUMM Wednesday, because the stupidhead president made a factual statement that is also totally outrageous and stupid. In his recent interview with Vox, Obama said that yes, terrorism is bad and serious, but the media also exaggerates the threat of terrorism to the average American because it makes for good television, while threats like climate change, which will affect everyone on the planet, don't get as much coverage because they don't make for exciting TV.

But he took a couple of paragraphs to explain that, so the media sexed it up a bit. At a press briefing Tuesday, ABC News reporter Jonathan Karl asked press secretary Josh Earnest if Obama seriously meant that climate change was worse than the death of ISIS hostage Kayla Mueller. Earnest went for a perfectly true reply, and the press corps had its sound bite:

“I think, Jon, the point that president is making is that there are many more people on an annual basis who have to confront the impact, the direct impact on their lives of climate change or on the spread of a disease than on terrorism."

There you have it: The dummies in the White House think climate change is a bigger threat than terrorism. What dummies! And so we got this bit of enlightened conversation on Wednesday's edition of Fox's Outnumbered:

Oh yeah. You heard that right. The President, according to his spokesman, believes drastic changes to the environment pose a bigger threat in the daily lives of Americans than terrorism. And those remarks coming the same day we learned of the death of Kayla Mueller, the fourth American to die in the hands of ISIS since last summer.

Oh yeah? Well, Tantaros has a pretty simple debunking of that! "How many Americans have died from climate change?”

Hmmm. Well, since climate change is predicted to cause extreme weather events, and we've been having quite a few of those, we're thinking ... more than four? Of course, since people have always died from storms and it's nearly impossible to single out climate change as the sole cause of any single weather event, deaths resulting from climate change don't come with handily labeled videos showing a warming planet dressed in black causing a tornado, a hurricane, or a wildfire. Still, the odds are pretty good that more than four Americans actually have died from the effects of climate change. But there's no note or ransom demand, so the official Fox answer is zero.

The officially designated get-yelled-at guy for the day, attorney Mark Eiglarsh, noted that Josh Earnest was merely "saying it affects more people in terms of numbers.” This too is a dirty lie, according to co-cohost Melissa Francis:

No, this all about the president wants to make corporations the enemy ... That’s much easier. He’s so much more comfortable fighting back against the 1 percent, against companies who are changing the environment rather than against ISIS.

And to think she'd make those remarks on the very same day that Obama formally requested Congressional authorization to, you know, fight ISIS.

“Is there anything factually incorrect about the statement that more Americans are impacted by climate change?” Eiglarsh asked.

“The science is off,” Tantaros shot back. “And let me point to a very recent example. That’s the most important thing, the science is off. We just had a snow storm two weeks ago in New York. They told us New York City was going to get blown out.”

“We had to give up our freedom and sit in our house, no cars on the road,” she continued. “Guess what? The models were wrong. So they got the models wrong on the science 24 hours before. How about those models 10, 20 years from now?”

And even the weather forecast was pretty darn close, as co-co-cohost Harris Faulkner noted: "The models were exactly right for the people in Boston." Tantaros was not impressed, summing up, “This hysteria, this crisis, this spending taxpayer dollars to fix it, until we have it as a fact, I don’t think we should do it.”

Let's put Andrea Tantaros in charge of snow removal in Boston, and see how she feels about spending taxpayer money on cleaning up after a crisis, shall we?

Also, rather than end on that horrible person, here is some video of some New Hampshire dogs dealing with weather after the recent blizzard:

They have a lot more snow to romp in than sled dogs in Alaska, where officials are changing the route of the Iditarod sled dog race because there's simply not enough snow on the traditional route. Not that they're Americans affected by a warming climate.