Fox News Solves School Shootings Forever: Just Shoot A Cannon At The Walls, For The Kids 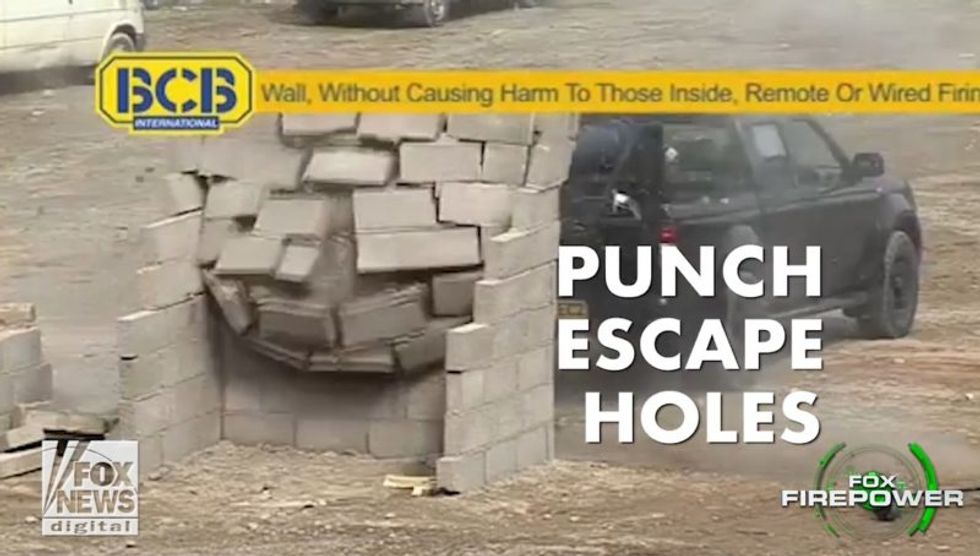 Fox News. What a bunch of escapeholes.

In oppressive dictatorships like Australia, Canada, and the UK, the nations' tyrants have reacted to past mass shootings by restricting or tightly regulating firearms, which will no doubt lead to the establishment of concentration camps any moment now. But in America, we react to school shootings with ever more innovative ways to deploy additional weaponry once a school shooting has happened, since preventing school shootings by reducing the number of weapons in circulation would be tyrannical. We've got armed guards, Donald Trump wants to arm teachers (who will never misplace a gun or shoot the wrong person), and now, Fox News is promoting an exciting new toy to rescue kids once the high-powered AR-15 rounds have already started flying: this cool air-powered cannon that fires water-cooler bottles at high velocity to punch holes in cinder-block walls so rescuers can help kids escape, and get faster medical care to any kids who might have been wounded by a shooter or crushed by flying cinder block debris.

Here, watch this thrilling, super dramatic promotional video (dunno if the choral music was added by the manufacturer or the YouTuber, but it's LOUD):

The humble, ordinary water cooler bottle used in offices all across America becomes a mighty missile when loaded into this amazing cannon -- the BCB Wall Breaker.

Without using any explosives whatsoever, the cannon remarkably uses just compressed air to blast the bottles through tough targets.

With the tragic rise in school shootings, the BCB Wall Breaker has the potential to save countless lives of American children in future active shooter situations.

For many years, BCB has had an outstanding track record innovating for Special Operations Forces.

Yes, the whole thing reads about like that. There's no indication it's actually an ad, or "sponsored post"; Ms. Barrie just gets enthusiastic about kinetic entry during tactical situations, we guess. So why would you want to be shooting plastic water-cooler bottles at walls during a crisis? Simple! You could knock down walls without explosives, which would "minimize the risk of injury to those who are trapped and reduces collateral damage inside the buildings too." Isn't that great? Barrie spins out this easy-peasy rescue scenario that would unfold while an active shooter or two roams the halls of an elementary or secondary school:

Fired from this amazing cannon, ordinary water bottles become powerful tools to save the lives of children in active shooter school attacks.

Imagine students barricaded in classrooms with no way to escape. The shooter is roaming the hallways. The only exit is the door to the hallway. If students tried to escape via the hallway, they could be greatly at risk.

Outside the school building, police could roll up these water cannons and quickly punch holes in the walls of every classroom providing large escape holes.

If students have been wounded, first responders can use the hole to accelerate access to medical care.

In both these instances, escape and medical care for wounded, seconds are vital and can mean the difference between life and death.

The cannon can also be useful for perpetrator apprehension. An active shooter will expect law enforcement to intervene through doors and windows. With this cannon, law enforcement can fire the cannon at any wall to create their own “door.”

Are you pumped? We're so stoked. Let's go order (price available by request) at least two of these babies for every school district in America!

We sure hate to be wet tactical blankets here, but it strikes us that there could be one itty-bitty problem with this beautiful new tool: According to a Homeland Security analysis, the average active shooting event is over within 12.5 minutes, while police response times tend to average 18 minutes (those are from a 2012 study, so perhaps cops have gotten faster). Sandy Hook, for instance, was over in about 5 minutes, and while children and teachers stayed barricaded longer, there would have been no need to use this exciting toy. (Yes, advocates of arming teachers like to use those same numbers to suggest good guys with guns could stop an active shooter, but there's little evidence to suggest that would work, either.) And Crom knows no children would ever be right next to the wall when the cannon went off -- the operators could yell at them to clear out, maybe.

The Fox News piece continues, spinning out other scenarios where we can expect walls to need breaching, like all the terrorism and hostage situations that will surely become common in America. If nothing else, Barrie has a very active imagination:

It could be used against terrorists using vehicles as weapons to drive at civilians in the street.

For example, cannons could be positioned in advance to protect 4th of July crowds. If a terrorist drove at the crowd, the cannon could blast the water bottle that would tear through the vehicle and stop the attack.

Yup, everyone needs one of these now. If this story ever makes it from the Fox website to broadcast, expect Donald Trump to embrace it as the cure-all for mass shootings and terrorism and probably Black Lives Matter protests.

Also, while we're not especially in love with the WALL BREAKER™, we were at least delighted to learn from BCB's website that the company has a storied history: It started out as a supplier of cough syrup for British troops in the Crimean war. BCB stands for (Doctor) "Brown's Cough Bottle," and 160 years later, they sell special forces toys and stuff. It's like the Sheinhardt Wig Company owning NBC.