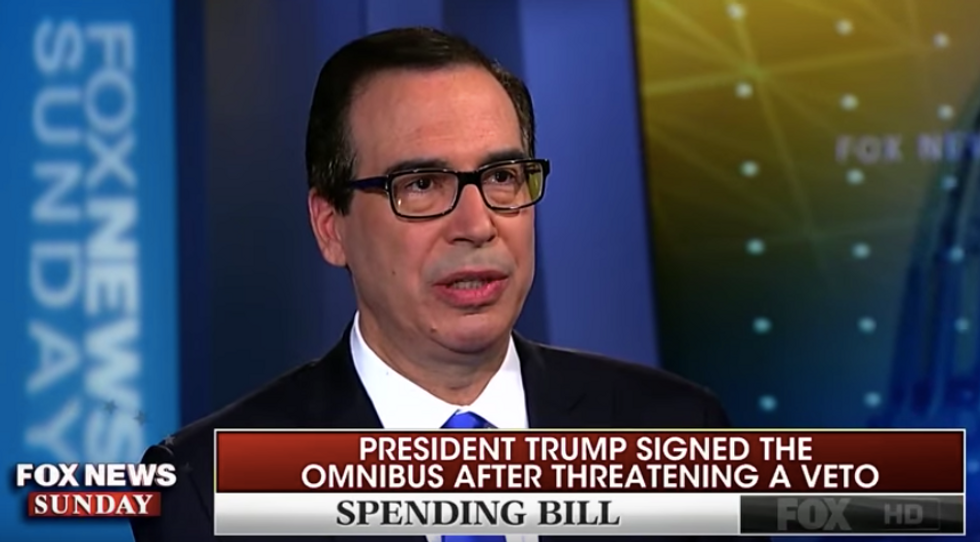 Was Treasury Secretary Steven Mnuchin so busy getting emergency Botoxed on Saturday that he didn't have time to prepare to go on Fox News? Because Sunday morning he could barely move his mouth to make lie words while getting his ass kicked by Chris Wallace for being an ignoramus who can't law good.

Seriously, what the hell is going on with his face here?

See, on Thursday when President Babyshits had a tantrum about signing the bipartisan spending bill, he tweeted that he is never not ever gonna sign no budget like that again. Congress needs to give him a line item veto so he can strike all that annoying domestic spending that Democrats insist on putting in there for stupid liberal shit like making sure people don't starve, or whatever.

But the old man tweets a lot of crazy nonsense, and we've all developed a pretty high tolerance. Blahblah filibuster, yaddayadda line item veto, arglebargle why can't I be king. WHAT. EVER.

In point of fact, the Supreme Court ruled the line item veto was unconstitutional in 1998, although apparently news of the decision hadn't reached the Treasury Secretary before he went on Fox News to demand its reinstatement.

MNUCHIN: And I'm not going to comment on what the president will do. But as you heard him say, he's not planning on doing this again. I think -- I think they should give the president a line item veto. These things should be looked at --

WALLACE: But that's been ruled unconstitutional by the Supreme Court, sir.

MNUCHIN: Well, again, Congress could pass a rule, OK, that allows them to do it. But --

WALLACE: No, no, sir, it would be a constitutional amendment.

MNUCHIN: Chris, we don't -- we don't need to get into a debate in terms of -- there's different ways of doing this.

Gosh, Chris! Way to harsh Steve's mellow, dude. Like, we don't need to get in a big debate about it. Congress can just pass a rule overriding the Constitution, or like the president can sign an executive order. He loves that shit, you know?