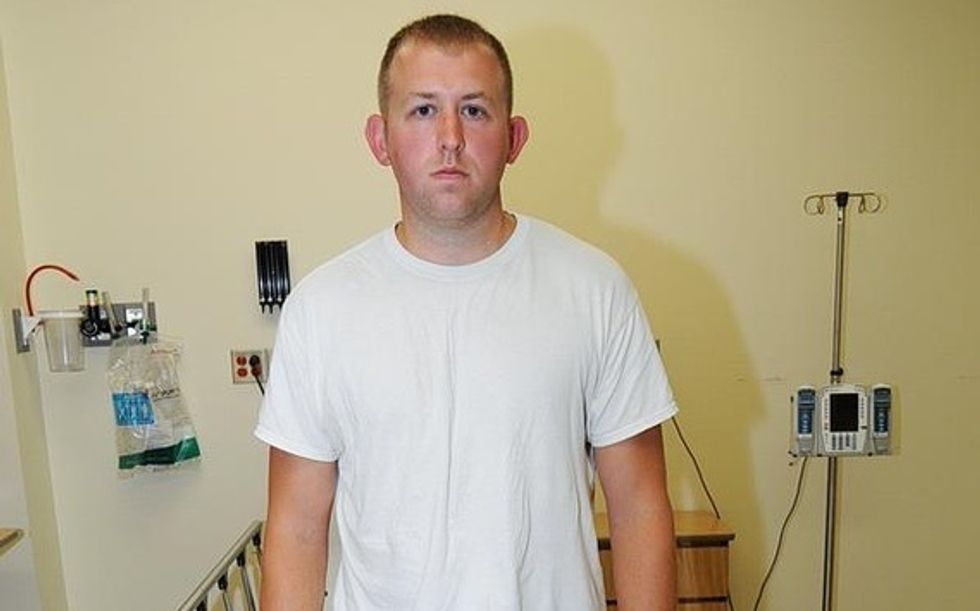 Yes, Ferguson cop Darren Wilson killed an unarmed black teenager, to death, but in addition to getting a "Nah, man, it's cool, we get it" from the local grand jury, he likely won't have charges filed against him by the Department of Justice, either. Ergo, as Fox News has been spewing at us since the non-charges news was first leaked, it is an obvious simple fact that the DOJ never had any legitimate reason to investigate the Ferguson Police Department or Darren Wilson in the first place. It was all a scheme, man, nefariously plotted by Attorney General Eric Holder and Co-Attorney General Al Sharpton and Thinks He's So President Obama, to start some riots an do some reverse racism.

In its customary fair and balanced manner, Fox invited former FBI Assistant Director and Law Enforcement Legal Defense Fund President Ron Hosko to agree with nighttime Fox blond Megyn Kelly about how the Obama administration tore apart the previously peaceful and post-racial town of Ferguson, Missouri. How do we know this is a demonstrable fact? Because, according to Kelly, the White House and the DOJ are refusing to comment on the leaks. And because we have never, in the history of America, heard an administration or government agency refuse to comment on an ongoing investigation (cough cough Karl Rove cough), what more evidence could you possibly need that there is some evil evil-doing going on here?

Oh, you need more evidence? Fine. What about the fact that it's taken the DOJ sooooooo long to do its investigating, huh?

HOSKO: So here we are, almost six months after this spark that ignited across the country, and we’re hearing leaks coming out of DOJ saying there’s nothing there. Megyn, I am disappointed that it’s taken this long, for not only the leaks but for the truth to come out of DOJ. From what I’m hearing, there’s no scintilla of evidence indicating that Darren Wilson did anything wrong that day, that his actions were completely justifiable.

From what Hosko is hearing -- from his friends at the DOJ? the voices in his head? the interwebs? -- there's no reason why investigating whether Wilson acted appropriately the day he killed an unarmed teenager should take any time at all, really, especially because it's been so obvious from the beginning that he did nothing wrong. Sure, the local prosecutor conducted an inexplicably belated and all-effed-up investigation before he finally was able to explain to the grand jury what a terrific guy poor defenseless scared-for-his-life Officer Wilson was. Sure, he allowed known liars to testify, which might have maybe created an even bigger mess, which might have maybe complicated any other investigations by, oh, say, the DOJ?

But don't let that distract you or derail you from the real point, which is that the DOJ's investigation into Wilson's actions is a red herring. As Kelly informs Hosko, the previous night, another special guest told her that the whole investigation was “a lure, that this was all a hoax, basically.” Why?

Damn shame Officer Wilson provided such a convenient excuse for Holder to enact his plot to get into the Ferguson Police Department's tent. If only Wilson hadn't killed that kid ... Eh, maybe Holder made him do that too. So what does it all mean? Like, REALLY mean?

HOSKO: Quite clearly there’s another message here because the events that day in Ferguson are finite. This is not some sprawling white collar cyber investigation that requires review of servers full of information, or rooms full of documents. The number of witnesses is finite. The number of perjurers and liars is finite. The FBI has picked through the facts, and those facts have certainly been known to DOJ prosecutors for many months.

Quite clearly, the DOJ should have been able to conclude, as Hosko already did, that Wilson is innocent of any wrongdoing. It's not like they had to look at computers and stuff! So, Mr. Hosko, what is this "another message"?

HOSKO: Is this incompetence out of the DOJ, or is this some grander design to influence? My fear is, look at the influence that it’s had so far in those five months. Look at the protests. When you were talking earlier about Yemen, you know, the parallels in some of your comments, relate to this case.

Sorry, but WHAT? A civil rights investigation of Ferguson is somehow connected to protests in Yemen? In what alternate universe does Yemen relate to this case, Mr. Hosko sir, and have you by chance swallowed a whole ton of acid recently?

HOSKO: We’re talking about people hollering for the deaths of Americans. Here in our own country, in the streets of New York, we have people hollering for the deaths of cops. We’re looking for leadership. We’re looking to start this conversation on race. The starting point should be the truth. And if you look back to August the 9th, the truth was a young officer was trying to defend himself against a violent attacker.

Yup, we know for a fact that Wilson was simply defending himself because even though Hosko wasn't there, he's heard some stuff, you know? And this is such a simple case, where you have a cop saying a thing, and some witnesses who maybe lied about stuff but so what, and also no computers.

So, does Hosko have any unsolicited advice for Attorney General Holder?

Ohhhhh. Yeah. Clever turn of phrase there, because it's like poor innocent Wilson has been hanged from a tree, and it's time to cut down his dead body, even though he is not dead and was not hanged, and it is Michael Brown who was killed and left in the street for hours, but if we're being honest about this "hoax," the killing of Michael Brown doesn't even have anything to do with any of this anyway.

We're sure Holder will get right on that whole cutting Wilson's body loose. Once he's done overthrowing the government in Yemen, that is.