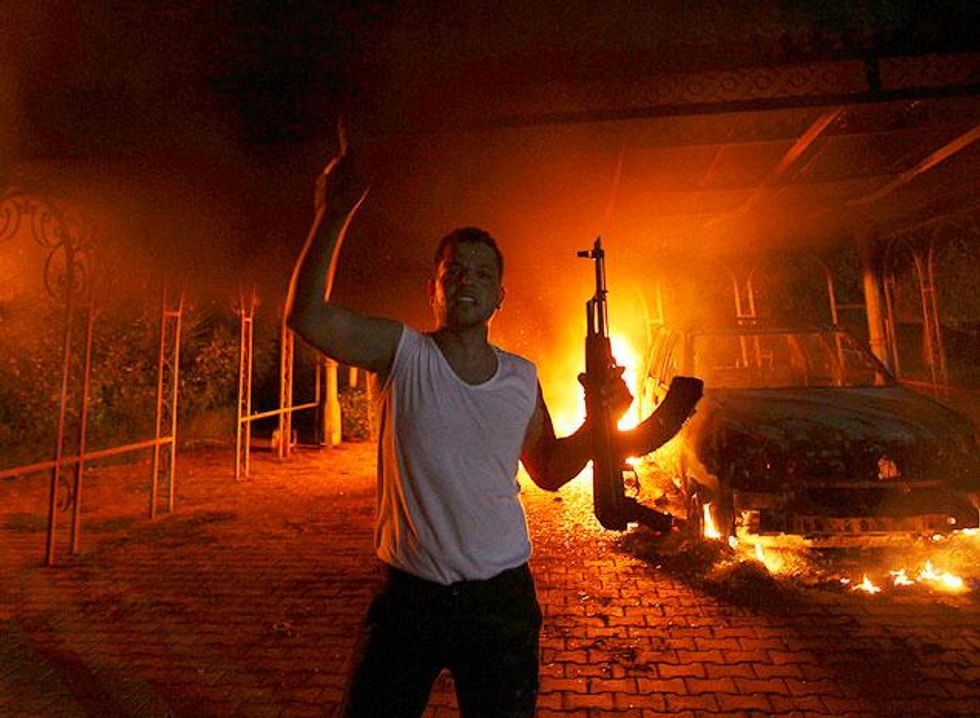 Impeach! Impeach! IMPEACH! Everything terrible you ever believed about our tyrannical gun-grabbing socialist Muslim foreign-born gay president has turned out to be true, according to the latest expose on Benghazi from ABC News:

ABC News has obtained 12 different versions of the talking points that show they were extensively edited as they evolved from the drafts first written entirely by the CIA to the final version distributed to Congress and to U.S. Ambassador to the U.N. Susan Rice before she appeared on five talk shows the Sunday after that attack.

Twelve different versions? Twelve? That’s a lot of versions, said someone who has never worked collaboratively on any document, ever, especially across different agencies that historically have been fiercely competitive over their own turf and interests.

In an email to officials at the White House and the intelligence agencies, State Department spokesman Victoria Nuland took issue with including that information because it “could be abused by members [of Congress] to beat up the State Department for not paying attention to warnings, so why would we want to feed that either? Concerned …”

That’s right, folks. For the first time in the history of Washington DC, someone edited talking points to serve their own interests.

Look, let’s keep it real here. This is not the Obama administration’s finest moment. It’s not the State Department’s finest moment either. (That would be this.) They seem awfully concerned with their own butts, and this story does seem to contradict what Jay Carney said about the talking points a while back.

But can we talk about the difference between a genuine scandal and a made-up one? In a real scandal, an administration has to actively do something illegal, or at least bad, like say, break into an opposition party’s headquarters in the dead of night or sell arms to an enemy and funnel the profits to death squads or start a war based on demonstrably false intelligence. It also usually involves a genuine coverup of what happened, not edited talking points that essentially delay labeling the cause for a confusing, messy incident still under investigation.

So how did we get to the place where this ABC News story is being treated as a Very Big Deal? The right wing, especially Fox News, has pushed this story so relentlessly that they have put the rest of the media in a position where any whiff of error on the part of the administration has to be treated as Big News, even when it’s not.

President Obama didn’t cause Benghazi like Nixon caused Watergate or Reagan caused Iran-Contra. There hasn’t been a coverup, either. (Unless you believe the administration engineered the Benghazi attack to silence Chris Stevens because he was going to reveal their plans to bomb the Boston Marathon so you should buy gold today!)

So to ABC News and the rest of the real journalists out there: take a nice deep breath. That’s good. Now take a moment, remember the difference between actual scandal and standard-operating-procedure-self-serving-DC bureaucracy, and give this story another try.