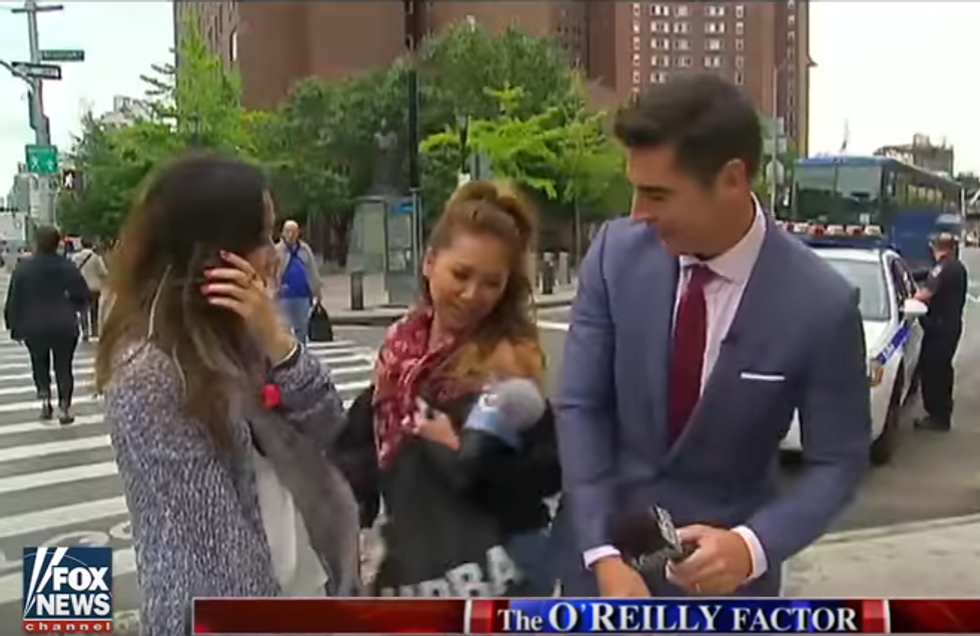 Jesse Watters gets to dance with the pretty ladies.

Hey Wonkers, are you in the mood for some HARMLESS RACISM, the kind white people know is just "in good fun," the type crusty white racists tune in to the Fox News channel to watch so they can giggle and thank White Jesus for making them get borned as crusty old white people? If so, you are a lucky duck, because Fox News's Jesse Watters -- you know him, that douche-y white kid who (we assume) smells like date rape and his dad's Old Spice, who makes hilariousvideos for the Bill O'Reilly program -- has discovered CHINESE PEOPLE.

It's an innocent enough concept -- what do people in New York's Chinatown think of this here presidential election we are having? It's particularly interesting, because according to a recent poll, Hillary Clinton is beating Donald Trump among Asian-Americans by a whopping 49 POINTS.

But then it goes to Asian Racism hell, as you'd imagine.

Haha, fooled you! That is just a video of the stereotypical "Oriental riff," followed by a big GOOOOOOOONG! at the end. If you don't have four minutes to watch Jesse Watters do racism to an entire neighborhood, though, you could just watch the above video and be done with it.

No, here is the real video, which also, we shit you not, starts the the "Oriental riff":

We'll let Esquire set it up, then we will tell you more of our favorite parts:

It's a veritable winning card of Asian stereotype bingo, up to and including a racist joke about alleged Asian gambling habits.

"Am I supposed to bow?" Watters taunted, before asking a merchant if his wares are "hot." A smash cut to a clip from The Karate Kid let us all know it's "in good fun." Nevermind that Mr. Miyagi was Japanese. It's all the same, isn't it?!

Watters asked a number of people what they thought about Trump and Clinton, in a jaunty number set to—you're never going to guess—"Kung Fu Fighting."

Oh yes. Are you LOLing in your underpants in your mom's basement yet? Well you will be!

You will giggle your white racist mouth off when Watters harasses a girl over whether everything is made in China now, and mocks her when she can't think of a specific thing off the top of her head that's not made there. He also asks her, "Do they call Chinese food in China just 'food'?" (Not to go way over Watters's head here, but the food we think of in America as "Chinese food" actually is a fairly American creation.)

You will feel sympathy for Jesse Watters when he asks a teenage boy if his parents' shop sells traditional herbs that make dicks get hard, and the kid refuses to ask his mom and dad for the traditional Chinese dick herbs Jesse probably needs so bad.

You will enjoy the parts where Jesse Watters gets to do traditional things like karate and tae kwon do, but a tear will form in your eye when you realize his sparring opponents are being real goddamn gentle with him.

And finally you will throw up your three last meals as you watch Jesse Watters get a foot massage from a Chinese massage therapist -- just like Esquire said, this video really does fill the Asian stereotype bingo card -- but you will thank the risen Christ that Fox News edited out the part where Watters asked the unwitting woman for a happy ending for his penis, ALLEGEDLY.

Like we said, it's just good old-fashioned, fun-filled racism the entire white racist family can enjoy.

The rest of you will be goddamned appalled.