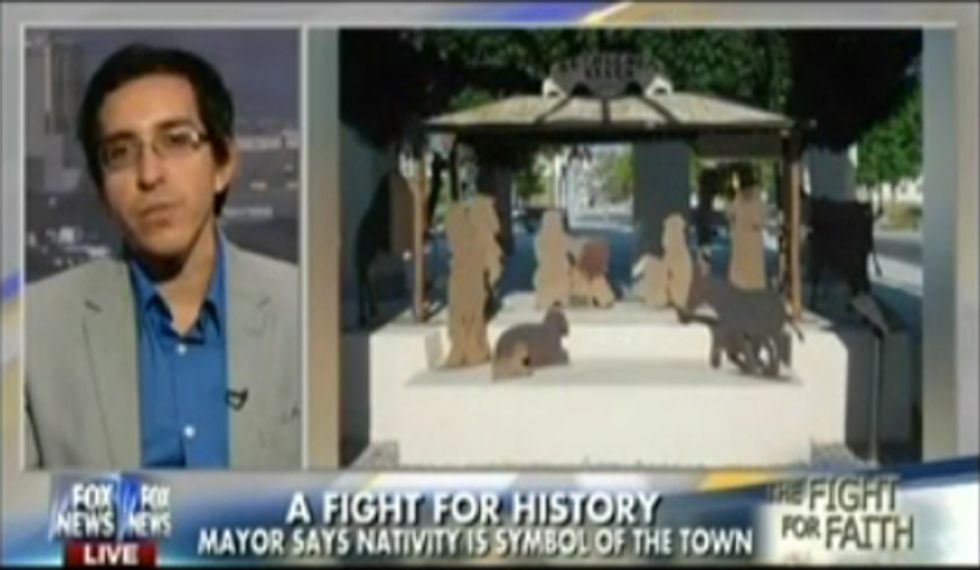 The War on Christmas is already here in August, according to Fox & Friends host Elisabeth Hasselbeck, who seems to have forgotten that Bill O'Reilly won the War on Christmas last year. Maybe this is one of those mopping-up-insurgents things, because Hasselbeck informs us, with much solemnity, that the city of Belen, New Mexico, has been warned that its year-round nativity scene violates the Establishment Clause of the First Amendment. But is Mayor Jerah Cordova going to just comply with some dumb letter from the Freedom from Religion Foundation? Of course not! Because, you see, Belen is Spanish for "Bethlehem," and the nativity scene is therefore not a religious display but a historical monument, commemorating events that didn't exactly happen in New Mexico, but who said a historical monument has to depict actual events from the area? Washington, Jefferson, and Lincoln never set foot in South Dakota, after all. (We haven't researched it, but we bet Teddy Roosevelt probably did -- and killed something while he was there.)

The Friday report is the usual Fox arglebargle, with Hasselbeck asking poor beset Mayor Cordova how he felt when he learned that some troublemaker from his town had complained to the FFRF about the nativity scene.

"Immediately, I was angry," he said, "because I know my town very well, I know our history, I know our traditions, and that nativity represents our town." We don't know if he's suggesting that the resident who complained is a traitor, or just not as good at being a Belenian (Belenite?) as Mayor Cordova is.

Not a word of which changes the fact that it's a specifically religious symbol in a public park, which makes it a no-no under the dumb ol' U.S. Constitution. Hasselbeck is astonished at how untimely this all is:

The war on Christmas typically comes, well, in the winter, near December, but this is coming a little bit early, but this isn't even about a seasonal issue. This isn't a Nativity that comes up for Christmas. This has been part, as you alluded to, part of your people's history there!

By golly, it's historical! How could anyone think of demanding that a historical nativity scene, which has historically been part of the town's history forever, be moved to private property, like maybe a church? After all, it's HISTORY.

A very, very, brief part of Belen's history, that is. The town was founded by Spanish settlers in 1741, and the nativity scene went up in 1992.

Maybe it looks better in December when it has pretty colored lights on it.

Not surprisingly, the town is planning to fight any possible legal challenge from the FFRF, which hasn't yet filed suit. Mayor Cordova is getting some top-notch Constitutional advice from a local priest, Father Clement Niggel, of Our Lady of Belen Catholic Church. He's just astonished that anyone would complain about a public religious display, seeing as America was founded to protect Christianity:

“When the Constitution was written … it said, ‘One nation under God,’” Niggel said about the issue. “It’s a Christian nation and our nation was set up under Christian principles. Our society has traveled far from what the original Founding Fathers wanted for the country" [...]

At the end of the segment on this brave "Fight for Faith," Hasselbeck summarizes Cordova's defiance: "A leader's voice, ringing strong." Such a hero, fighting against the oppressive War on Christianity that's trying to force Christians to worship God in their churches instead of integrating religion with government, just like the Founders wanted when they wrote the Pledge Of Allegiance, the Lord's Prayer, and three Hail Marys into the Constitution.

So, hey, let's hope the good people of Belen are looking forward to spending a lot of tax money on a losing legal fight. Wonder if the city even has an attorney, or just the priest?

The mayor of nearby Festivus, New Mexico, had no comment on the situation.