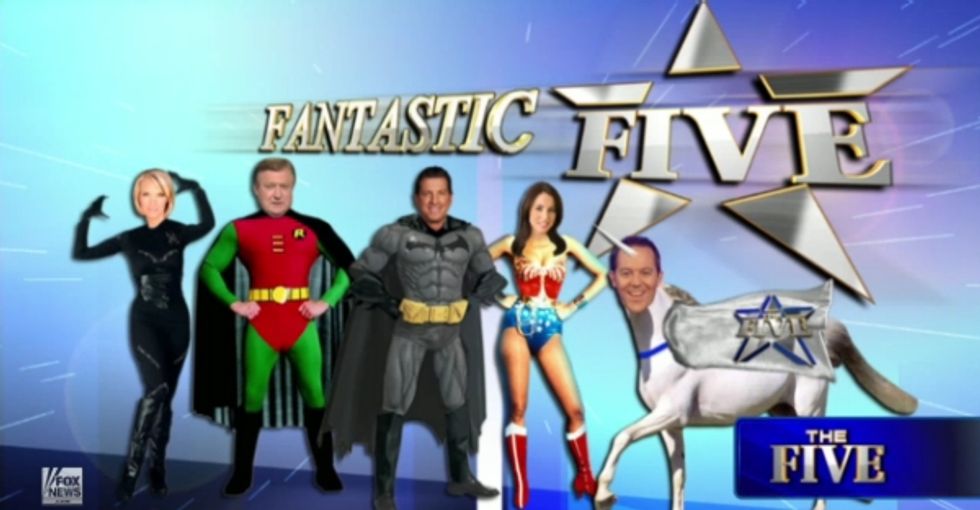 Well, here is something totally unexpected: the moron quintet at Fox, The Five, is pretty sure thar be terrorists, or at least terrorist sympathizers, in Congress. And no, they're not talking about Rep. Peter King, who is a bona fide terrorist sympathizer -- but only for the white kind so it's okay somehow, but shhh, let's not talk about it, move along.

Nope, Eric Bolling is on to Rep. Keith Ellison, who is a Democrat AND a Muslim, so, ipso facto and supercalifragilisticexpialidocious, you know, wink wink:

He's also very dangerous. He's kind of been like the Muslim apologist in Congress for a long time. He swore -- he raised his right hand and took the oath of office on the Quran, if you remember, in 2007, Keith Ellison did. I think it's time for profiling.

Ah yes. How could anyone possibly forget the time that Keith Ellison, as a brand-spankin'-new member of Congress, held a ceremonial swearing-in after being sworn in for reals, using the Quran that had belonged to that most famous of America-haters, Thomas Hussein Jefferson? And how that threatened America and freedom and yadda yadda et cetera because this is a freedom-loving country where you can worship any God you want as long as it's American Jesus. And it was exactly that sort of in-your-face anti-Americanism that prompted Glenn Beck, who used to be at Fox News before he became even too crazy for Fox -- and let's take a beat to appreciate that -- to ask Rep. Ellison to prove he's not, you know, a terrorist.

OK. No offense, and I know Muslims. I like Muslims. I've been to mosques. I really don't believe that Islam is a religion of evil. I -- you know, I think it's being hijacked, quite frankly.

With that being said, you are a Democrat. You are saying, "Let's cut and run." And I have to tell you, I have been nervous about this interview with you, because what I feel like saying is, "Sir, prove to me that you are not working with our enemies."

And I know you're not. I'm not accusing you of being an enemy, but that's the way I feel, and I think a lot of Americans will feel that way.

For what it's worth, former spokestwit for George Dubya Bush, and the token blonde bobblehead on The Five, totes believes in, like, religious freedom and stuff?

I do want to say, though, I'm comfortable with Ellison taking the oath on the Quran. I'm for religious freedom in America. And I'm for being a lot tougher, including with the Muslim community, and with governments overseas to make sure that they are held liable. And I liked what President Bush said in 2001: "You're either with us or you're against us."

Isn't that so nice of Dana to think that Rep. Ellison is not necessarily a dangerous Muslim apologist as long as he's with us and not against us like the most bestest (and also super dreamiest) president said? See? They're not all crazy insane at Fox. They're just, you know, asking the sorts of questions that any good mom-and-apple-pie lover would ask: why does Keith Ellison hate America and why aren't we profiling him yet, considering how dangerous he is?