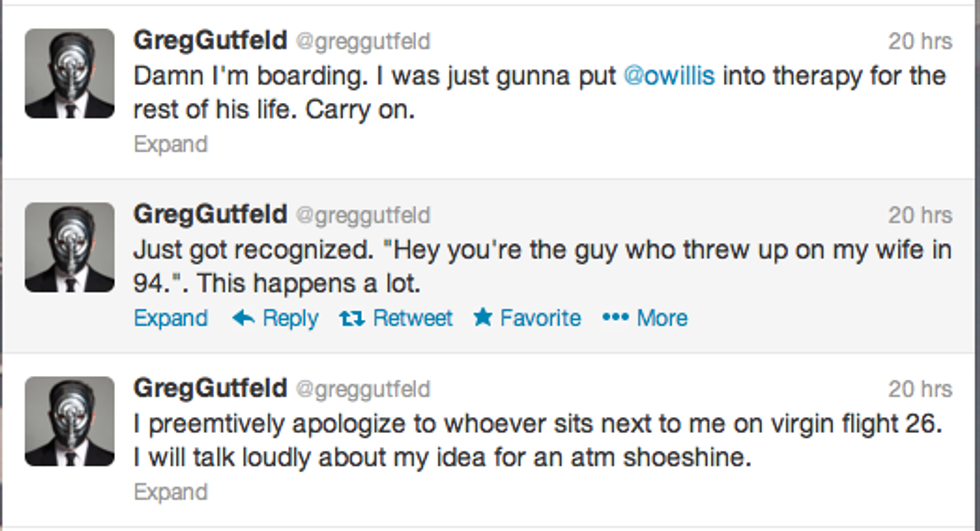 The lack of internet access on planes used to provide people a bit of a forced break from being constantly connected to the miasma of awful penetrating our daily lives. However since Wifi access became a more or less standard feature on long flights, many people have decided to take advantage of this contained period of time to catch up on work or answer emails. Others, including failed titty magazine impresario and middle-aged youth expert Greg Gutfeld, apparently like to use this opportunity to spend five hours on a one-sided tweet rampage for no particular reason.

What started as a response to Media Matters's Oliver Willis's rather mundane observation that the GOP is needlessly obsessed with Benghazi turned into a full on act of self-immolation by a man who is tired of liberal bullies and being mistaken for that guy from Headbanger's Ball:

But it wasn't just Oliver Willis that was subjected to the exposed core of Gutfeld's booze addled Napoleon complex. No his fellow passengers were in for a treat as well:

Suddenly flying in coach far away from this fine gentleman in business class seems like a really good deal.

Eventually Gutfeld regained his composure and decided to refocus his firehouse of word vomit back on Media Matters, this time going off on Eric Boehlert (because who cares):

And eventually he got around to wishing rickets on my dog:

Gutfeld continued this wonderfully mature campaign of truth telling that one would expect from a 48 year old man for another five hours, eventually proudly declaring victory through his 107 tweets. By the time Greg landed he was ostensibly proud of the various people that he had utterly crushed through his sharp wit, incisive criticism, and bevy of super awesome fat jokes. Just another day in getting paid to be an overgrown frat boy.

What is lost in all of this is that Gutfeld was traveling to visit his mom who recently had surgery, which truly sucks. We wish the best for his mother as she recovers from surgery, and hope that she has a sturdy pad lock on her liquor cabinet and is well enough to keep track of her meds as her son apparently is incapable of dealing with his emotions at this time in the manner expected of someone two years away from an AARP membership. Perhaps it is time for Roger Ailes to put a breathalyzer on Gutfeld's iPhone before the world is treated to another slew of HILARIOUS virtual bro-bile.