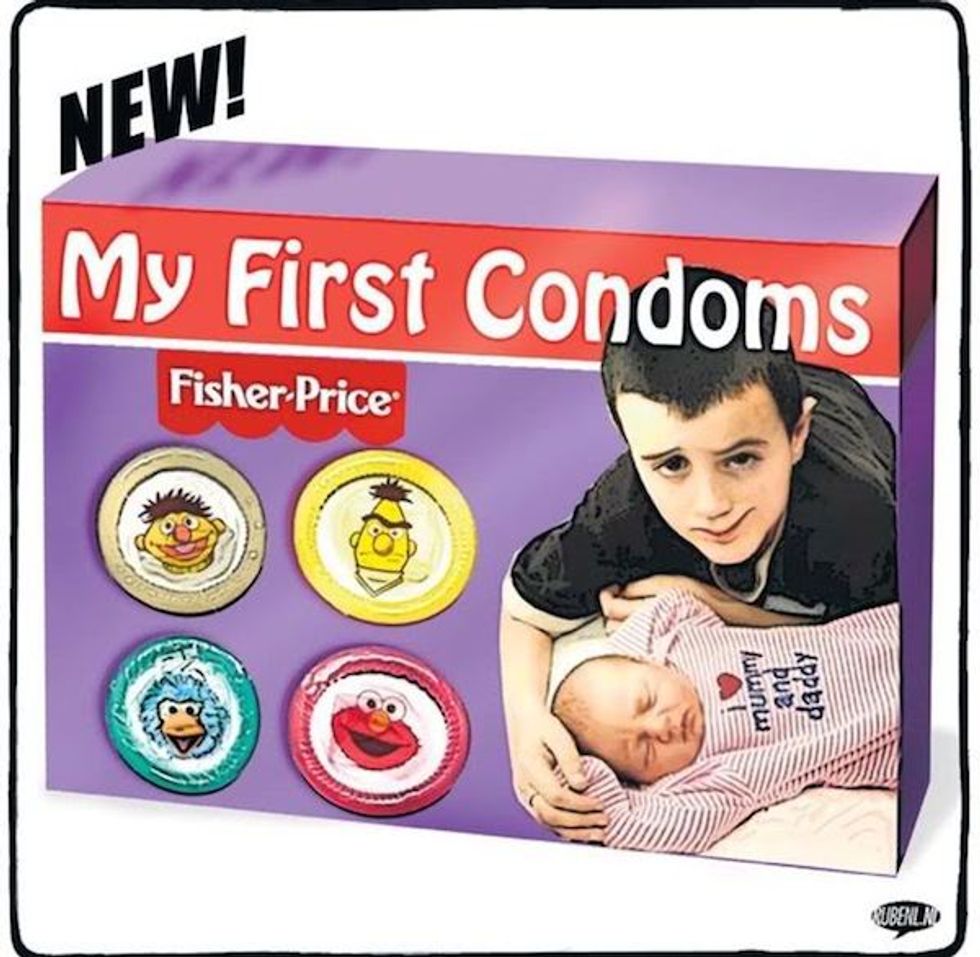 Can’t get enough dick? We can never get enough dick -- news about dicks, politicians being dicks, anonymous airport dick, and sometimes dicks talking about dick-things. Enter Todd Starnes, Fox News comment-spewer and host of the physical embodiment of all the worst insinuations of the word "dick." His latest complaint: Public schools are beholden to Big Condoms. No, not the Magnum condoms that you buy to put in your nightstand to impress ladies who snoop, but which you never use because haha,get real.  We are talking about the Big Condom-Public School Industrial Complex, which is a 100 percent real thing, sheeple.

Where did Starnes get this idea? Logic, that’s where. Let’s see if you can follow it. Here’s the premise:

A Fayetteville junior high school made a teenager girl change out of a T-shirt at school this week because the school said it contained sexual content.

The T-shirt in question was a shirt that reads “Virginity Rocks” on the front.

Let’s keep in mind that it is rightwing bible-humpers who get all frothy at the mouth over anything to do with sex in schools, so rules like this are probably put in place because of religious zealots what hate sexytimes. But Starnes makes the totally not-at-all-batshit-crazy jump to this in a radio conversation with fellow dick, Family Research Council President Tony Perkins. Here's Starnes's "logic," per Right Wing Watch:

I believe that maybe they [school administrators] were concerned this pro-abstinence t-shirt might cut into this school’s condom profits.

Sounds about right. Totally makes sen… wait, what? That makes no sense at all. Unless a middle school is selling condoms, which is not the worst idea in the world, but we doubt that’s the case.

How did he make the jump from a free expression issue to condoms, other than the fact that Starnes probably thinks a lot about dicks and condoms?

“Here’s my take on it, I thought it was interesting, [the student’s mom] said what’s really interesting is that any child in that junior high school can go to the counselor’s office and ask for and receive free condoms and yet her daughter cannot wear her pro-abstinence t-shirt in the public school,” Starnes said.

So now the school has somehow managed to make giving away condoms a profitable endeavor? Sounds like fuzzy math to us. Starnes does not bother to go through the mundane economic theory behind the relationship between giving away a product and raking in the ca$h, but we totally trust him because LOGIC. We can’t wait for the James O’Keefe undercover sting detailing the behind-the-scenes negotiations between Common Core Overlords and the Big Condom Industry laying out how to bring in billions of dollars to schools through giving away contraceptives. And also how condoms make kids gay Nazis, probably.

But the crux of the matter is this: It’s unfair that behind closed doors kids can obtain health care products that can prevent unwanted pregnancies and STDs, but a student cannot publicly wear a shirt with sexual content. Those two things are exactly the same, except for that they are not because one is related to a student’s health, and the other one is related to free speech/expression.

The student’s mom is totally on the side of Starnes, of course, because of how he brought her perspective into it. And there is no way that the outraged mother would have said anything to side with the school.

Crozier [the student’s mom] said she can also understand why the school made this decision.

Crozier had posted about the situation on her Facebook page. Crozier said a comment that her friend posted made her consider the other end of the topic.

Hey, that’s what real logic looks like! Not that we would be opposed to either t-shirt, but at least the mom shows a strong grasp of rational thinking.

As for Starnes, we will leave him to dream about Big Condoms, because that’s probably as close as he will get to them.

Get it? Because he has a tiny penis. Which is odd, because he is such a giant dick.