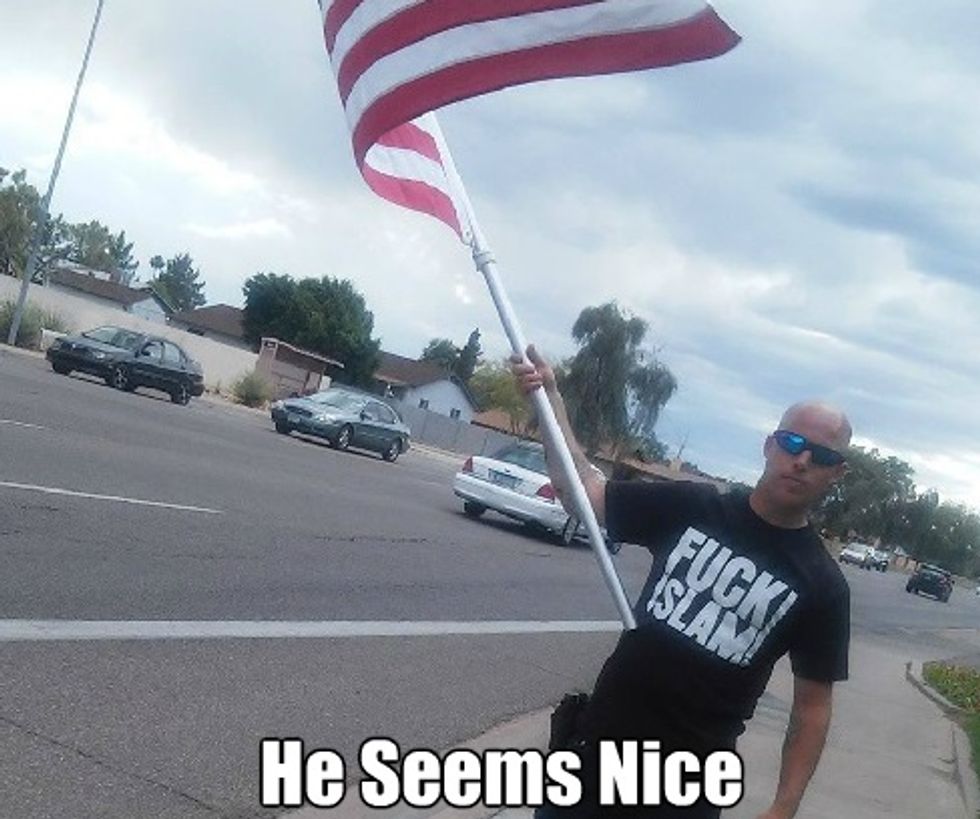 In what's expected to be a terrific day for both the First and Second Amendments, several hundred armed idiots are expected to show up for a rally and "Draw Muhammad Cartoon Contest" outside a mosque in Phoenix Friday evening. The event's Facebook page emphasizes that while the rally should be "PEACEFUL," it would also be a terrific idea for attendees to "utilize there [sic] second amendment right at this event just incase [sic] our first amendment comes under the much anticipated attack."

The announcement wasn't clear on whether participants in the "art" portion of the event would have to bring their own crayons.

The event's organizer, Jon Ritzheimer -- the gent with the classy t-shirt up top -- chose the Islamic Community Center as the most logical site for an anti-Islam rally because the two idiots who attacked Pam Geller's Hate-Islam event in Texas attended the Phoenix mosque for a time, proving that everyone at the mosque is a terrorist, or at least "known acquaintances" of terrorists.

Ritzheimer told TV station KPNX that he's really quite the expert on Islam:

"I want this to be about pushing out the truth about Islam," said Jon Ritzheimer. "I've read the Koran three times... the ones flying the planes into the tower, those are Muslims following the book as it is written."

By "read the Koran three times," we'll just assume he means he's read at least three websites about the scariest verses in the book.

The current version of the Facebook announcement has removed a previous version's invitation for bikers to attend, but not to gather in a nearby restaurant's parking lot. It's almost as if bikers have a less than stellar reputation for some reason.

Ritzheimer also went on CNN to tell Anderson Cooper that he's a whole lot like the signers of the Declaration of Independence, and that Islam Very Bad, although he had some difficulty explaining why, if Islam's so awful, he proudly served as a Marine in Iraq in support of an Islamic government -- he's quite sure that "true Islam" is terrorism, but that U.S. support of Iraq and Afghanistan both is and is not supporting terrorism, maybe? He was just following orders. Ritzheimer's glassy-eyed responses to Cooper are pretty classic:

Best moment: Cooper asks if Ritzheimer is "playing into the narrative of ISIS, of Al Qaeda, which is basically trying to say there is a war between Islam and the West,” and the Brave Marine quickly answers "sure." But then he insists that he doesn't believe in actually doing war against anyone, except they started it, what with all the terrorisms. FREEDOM!

"It will be the same as every Friday evening and we're going to tell our members what we've told them before: not to engage them," said Shami. "They're not looking for an intellectual conversation. They're looking to stir up controversy and we're not going to be a part of it."

This may be very disappointing to the guys outside with all the guns, who are by no possible stretch of the imagination itching for a fight. A representative of the Council on American-Islamic Relations (CAIR), Imraan Siddiqi, told CNN that mosques in the Phoenix area have "received threatening letters -- very specific threats, saying that we are going to massacre your congregations." Organizers of the rally have, of course, condemned the threats ... oh, actually, no, they haven't. Why would they? The Muslims started it, after all.

Siddiqi said he was troubled by the "intersection of Islamophobia and gun culture" the rally represents. Siddiqi also said that his group was "advising people ... it's better to stay clear from the event, don't engage with these people," which is exactly the sort of violent rhetoric you'd expect from someone who believes in a book that tells people to fly planes into buildings.