Freeze Your Balls Off the Medicinal Way 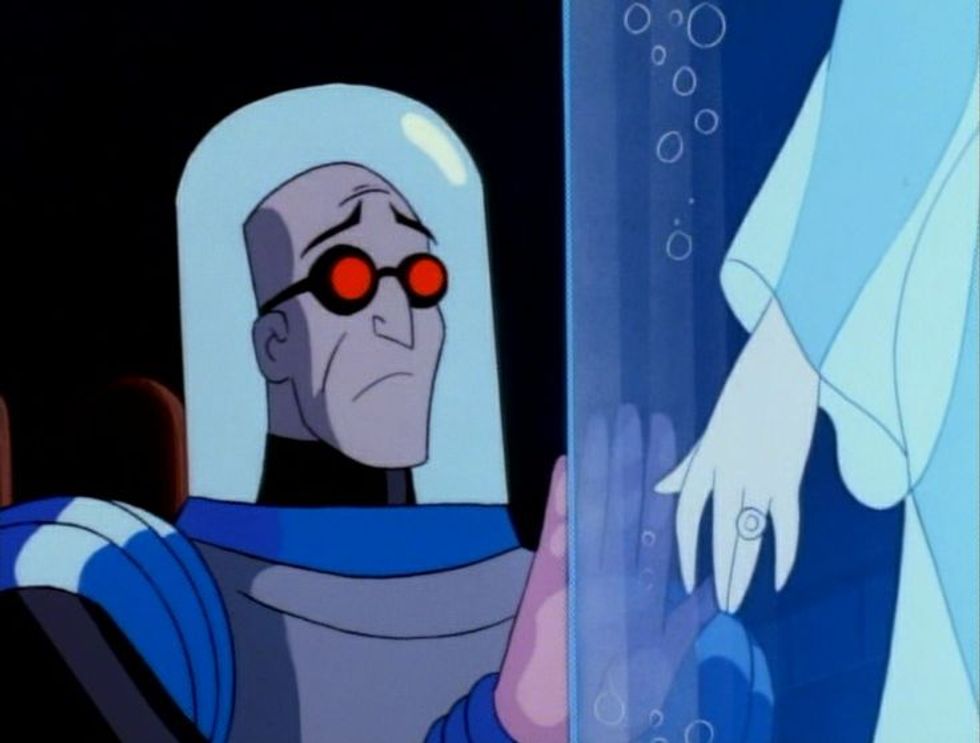 Greetings, pilgrims! It's time again for yr ole faithful Snake Oil Bulletin, roundin' the mesa to bring you fine salt-o-the-earth folks the finest in tinctures and tonics guaranteed to buck up your constitution and help Grandpa live to a ripe old age of 45. What medical miracles we have in store!

This week, we decided to take a gander at another trend so popular among the 1% -- people who could easily afford the finest medical treatment in the world but squander it on bee venom bikini waxes and cat piss enemas, two things we just made up but are so crazy you ALMOST thought they were real. This week we examine the fast and furious world of rich people freezing themselves healthy. Let's dive on in.

If you are any respectable member of the holistic jet-set, you may have heard of Whole Body Cryotherapy (WBC), the subject of today's Bulletin. Despite the awesome sounding name that brings to mind Mr. Freeze's dying wife or Walt Disney's frozen head advising Bob Iger even today on just the right way to bilk another 6 billion off Disney Princess Popsicles®, the reality is so much more...white? Yeah, white. Like fluorescently white.

The basic premise of the treatment is that a grown-ass person with more money than sense completely submerges their body in a "sauna" that is cooled to negative hundreds of degrees through the magic of liquid nitrogen. The freezing lasts only a few minutes, but if you believe the breathless cryotherapists who populate our nation's Beverliest of Hills, the treatment is effective at treating a host of problems from rheumatism and asthma to Alzheimer's, weight gain, and depression. Because when we were depressed, nothing perked us up more than submerging our bodies in a bath tub full of ice until the paramedics came. Or maybe that was when we traded a kidney for Goo Goo Dolls tickets. Who can say?

Let's take a gander at one of these cryotherapy fuckers, shall we? Here we see the main website for Cryo Health, a cryotherapy lab based in -- OH WHAT DO YOU KNOW -- Beverly Goddamn Hills. It's run by a cadre of very pretty Los Angelenos who want your experience in a -240 degree liquid nitrogen bath to be as pleasant and not-terrifying as possible. Oh joy, they even have a video!

Let's follow our lovely protagonist -- let's call her Ashleighnne -- as she enters the sterile white lobby of CRYO. Witness in amazement as she signs her liability waiver! Next Ashleighnne sits down with the lovely nurse woman in a lab coat as she takes her vitals. The nurse then gives her the OK finger salute, like most medical professionals do, and leads her into the freezing grotto. She points to the handy CAUTION chart which demands that their customers have dry skin, remove their jewelry, and put on knee high socks and slippers. The weirdest one, though, is number six: "Wear dry underwear (men)." Why are men singled out for their sloppy crotch hammocks? Are women's skidmarks too dainty?

Continuing our longstanding trend of pooping all over everything fun, we'd like to remind our readers that freezing your balls off medicinally is kinda fucking dumb. There is exactly zero evidence that WBC does anything than cool your skin temperature a few degrees. The FDA has revealed that the trendy practice of cryotherapy has no demonstrated efficacy and in some cases could actually harm people. The FDA notes that even cryotherapists admit that cryotherapy runs risks of asphyxiating its patients, or causing them to pass out from oxygen deficiency, which tends to happen when you pump a closed room full of nitrogen. There's also the risk of frostbite and frostburns because, lest we state the obvious, cold nitrogen is cold.

So go and have a ball freezing your joints stiff atop a mountain or by standing underneath any office's A/C unit in the summer, but don't pay these charlatans hundreds of dollars when some pants left in the freezer will do the same thing.

FDA recalls homeopathic sugar pills for containing something other than sugar (spoiler: it's poison)

What a whirlwind week for our dear friends the homeopaths. After many years of struggling to gain mainstream acceptance, at long last an agency as prestigious as the FDA has finally turned their gaze upon them. In a press release issued by the agency, homeopaths everywhere received the recognition they've been craving.

The good news: Homeopathic pills finally do something! Hurray!

The bad news: They give seizures to babbies. Boo!

On September 30, the FDA issued a press release warning consumers about the dangers of homeopathic teething tablets. The release stated that consumers should stop purchasing the tablets and dispose of any they already had. It turns out that batches of the homeopathic teething tablets could contain potentially dangerous or lethal amounts of belladonna, aka deadly nightshade, aka the poison every Dungeon Master has used as the go-to poison for every campaign ever, aka Stevie Nicks's first solo album. According to one source, belladonna is one of the most toxic plants in the Eastern Hemisphere. Children exposed to belladonna can suffer from seizures, muscle weakness, skin-flushing, constipation, or inability to breathe, not to mention draggin' your heart around. It has rare medical uses, but the last place you want to find it is in your baby's mouth.

Yet, for years now, belladonna has been the primary "agent" in homeopathic teething tablets -- we say "agent" because the primary ingredient in every homeopathic treatment is still water, but nobody tell them that.

Normally, homeopathic treatments are completely harmless and ineffectual because they basically consist of some herb or substance diluted in so much water that past a certain point it's mathematically improbable for even a molecule of the original solute to be present. The problem is that the consistency of homeopathic mixtures is non-existent: under the law, homeopathy is STILL not regulated by a single oversight agency, which means that the pills can have anything from exactly what's on the box to a bunch of leftover sawdust and make-up grease.

As it stands, the FDA still does not regulate homeopathy. Because of that, there is absolutely zero safety testing performed on these tablets, meaning that we get wildly inconsistent doses across any number of "treatments." In fact, this isn't the first time the FDA has had to issue a safety warning on THIS EXACT SUBSTANCE. Back in 2010 the FDA released a warning not to buy these "baby pills" because, once again, THEY CAN POISON BABIES.

There are so many ways to help your baby with teething. A cold rag kept in the freezer can offer a baby relief from the pain of teeth cutting through their gums. A plastic teething toy offers them something to bite when their jaws ache. Hell, doing whiskey shots with your baby in a Toledo dive is probably healthier than giving them potentially lethal doses of belladonna (the FDA remains silent on if babies can handle their liquor like real men). In a pinch, you could even try letting the little nipper chew on some leather and lace.