Fun With Christianists: Things You Can Learn in a Christian 'World History & Cultures' Textbook (Part 1) 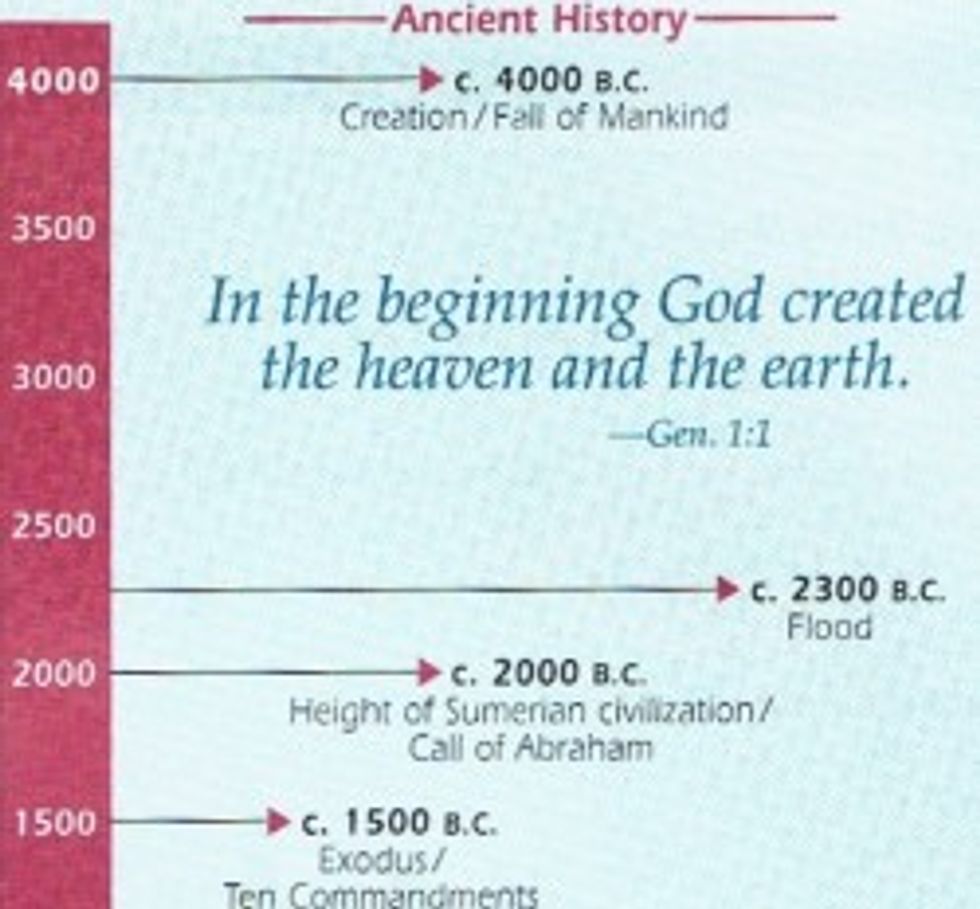 You know the drill by now: Every Sunday, we visit Christianist America, where Jesus delivered the Constitution to George Washington but now Christians are somehow a persecuted minority. This week's travelogue comes courtesy of World History and Cultures In Christian Perspective, 2nd Ed. (A Beka Book, 1997), a 10th-grade history text which the publisher's website says "stands on the conviction that God is the Creator of the world and the Controller of history."

You get a good sense of World History's agenda from the table of contents. "Asia and Africa" are dealt with in the first 6 chapters -- "The Middle East" and "Egypt" each merit their own chapter, because Bible, duh. And then the entire history of these two continents, which account for 75% of the planet's population, is polished off within 40 pages, in chapters imaginatively titled "Other Asian Cultures" and "Other African Cultures" (Actual section heading: The Dark Continent. This is not inside ironic quotes). Most chapters and sections have the bland, utilitarian headings of any high school text -- but then there are the subtle reminders that this is a fundamentalist Christian textbook:

It goes without saying that World History begins with the Creation in 4000 BC, as this helpful timeline indicates. The texbook opens with a reminder that "For the beginning of history the Bible is our only reliable record." As equally valid historical resource The Onion points out, this event came as a big surprise to the Sumerians. (World History conveniently places the Sumerian civilization's start two millenia later, to make room for the Flood.)

Here are some other things you should know about the early history of the world:

Got it, kids? The power to kill evildoers with God's permission is central to government. This alone may tell you everything you need to know about World History's worldview.

A page later, after this perfectly sound example of anthropological evidence, the text wags a finger at the Sumerians for dabbling in "the pseudoscience of astrology."

Yes, that means exactly what you think it means: buttsex. This is the closest that World History gets to acknowledging the existence of the notorious Hellenistic Athenian Man-Boy Love Association (HAMBLA).

You know how a lot of "modern" secular textbooks warn that ethnocentrism is somehow a flaw in studying cultures other than one's own? Well World History and Cultures is not going to bother with any of that politically correct nonsense that's so fashionable nowadays. Get ready to have your multi-culti world rocked, heathens!

(That "Catholics need to find the Gospel of Christ" stuff will become a major theme next week, because Reformation!)

This argument about "backwards cultures" sounds vaguely familiar to us, for some reason.

History really is a matter of perspective and emphasis, don't you think?

Again with that "darkness," huh? But it's only a metaphor, right? It would be niggardly to suggest otherwise.

We did not see that coming! In our next visit to Christianist America, we will learn why the Papacy, the UN, and Medicare are evil dirty lies!

UPDATE: A number of commenters have pointed out trifling details like the explosion of call centers in India, or the fact that the Philippines, post-Marcos, is now a multi-party democracy. Good catch! Note that this thing was published in 1997; although a more recent (2010) edition of World History is available, there's little reason to think that any of the earlier edition's giddily Eurocentric worldview has been lost; an online review site for homeschooling parents says that "The Third Edition is almost identical to the Second Edition in content, although additional information at the end brings it up to the time of the Obama administration" (yes, that may be worth another visit to Ebay...).