Game of Hormones: How Will Lady Clynton's Grandchild Help Her Usurp The Throne? 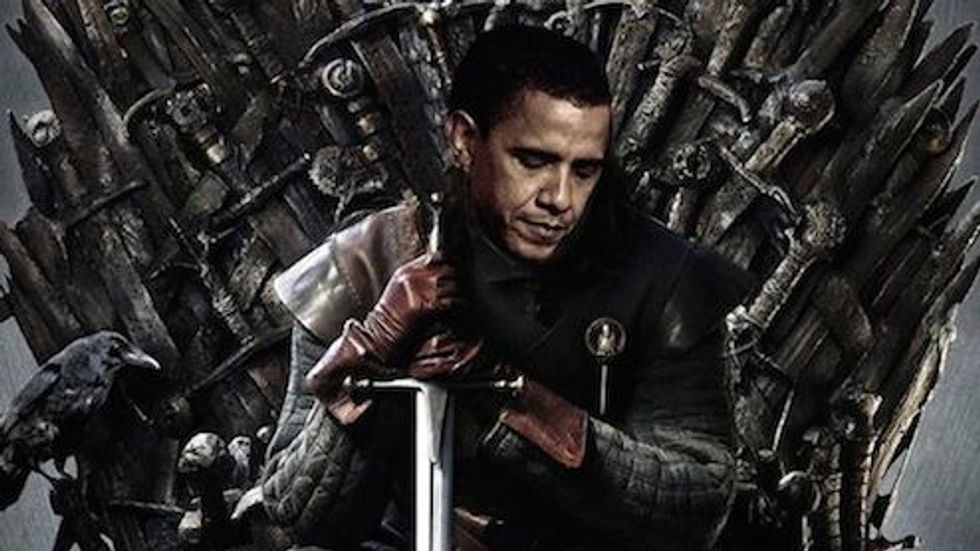 The bloodstone hearth glowed crimson and umber athwart the embers of the fire. Lady Hillarye Clynton regarded the beasts carved upon it: the savage bear, the diffident squirrel, the cowardly otter. Above them all, the rampant croissant, sigil of House Clynton, shone with buttery benevolence. But it was the rabbit that arrested her attention. The prolific rabbit, dam of furry kingdoms. She sought wisdom in its stony haunches.

For she had borne a daughter only. Fair Chelsye was a strong girl. She had retained the name of her House rather than take her lowborn merchant husband’s. Yet for all that, she could not be a son, and no legitimate son would ever join her. She had never harmed the family’s political fortunes, but neither had she helped. She had been too aged to kindle tender feelings in the hearts of the smallfolk when Lord Clynton held the Iron Throne.

But now, by the gods, Chelsye had promised her mother a great gift. She was with child. The possibilities spun out before Lady Clynton like threads of gold.

“A child,” she whispered. “The game is changed.” In one sure motion she pulled a single strand of hair from her head and let it fall into the fire. Green smoke hissed from the coals as a face appeared in the hearth. The ghostly visage of Ser Marke Penn, the Worm Knight, greeted her.

"Of course you have, you snake." Lady Clynton grinned. “What is your counsel?”

“I see two courses,” said the oily spirit. “In the first, you treat the child as your own. Hold him before the smallfolk and proclaim that he is the future, that you seek the throne not for yourself but for him.”

“Or her,” he agreed with unmanly haste. “The child will have common blood. This may please the people.”

Lady Clynton frowned. Her husband had common blood as well, ennobled only by victory in combat. She feared it would be the same for her grandchild. “What is the other course?”

“M’lady, pardon me,” purred Ser Marke. “But it might be more beneficial if the child is lost.”

“Lost!” Lady Clynton raged. “If you are suggesting that we, that I—“

“A dram of wolfsbane and the whelp falls out. The sympathy for you would be considerable.”

“I should give you a dram of wolfsbane! Begone!” Ser Marke’s face dissolved at once. Sometimes the Worm’s counsel was of great value, but on this matter his worm’s heart had betrayed him.

Lady Clynton sighed. She would consult with her husband when he awoke. Yesterday’s Feast of Whores had exhausted him, but his mind would be clear by morning.

For now, she was alone with her cold calculations. They all summed to one thing: 2016 is coming.