Gateway Pundit: Are Parkland High Kids AGENTS OF THE DEEP STATE? He Is Just Libeling! 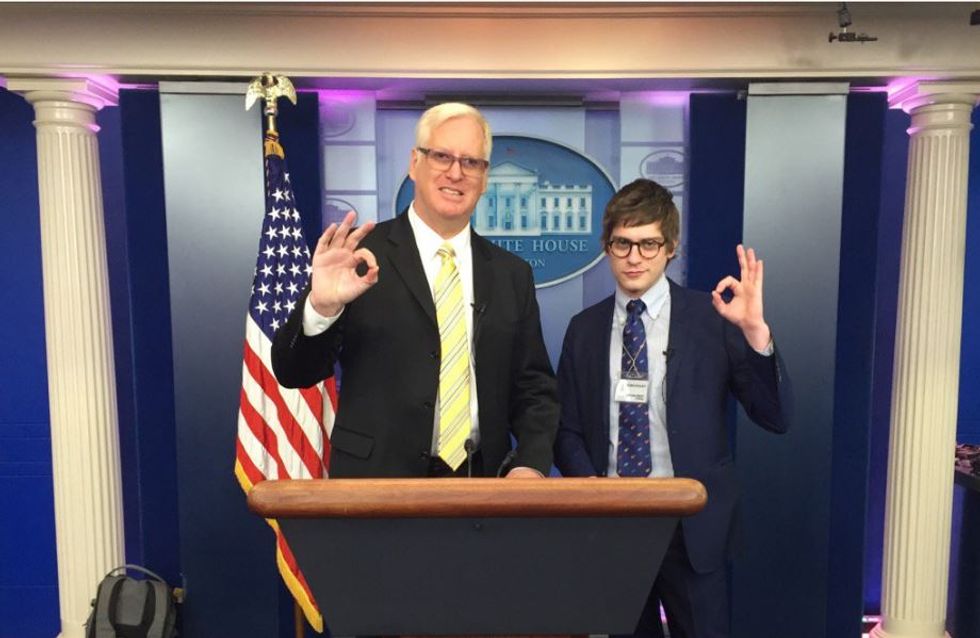 The little guy is quite a scrapper. Against teenagers.

Gateway Pundit's Lucian Wintrich, the Stupidest White House Correspondent on the Internet, has managed to offer up a truly original take on the high school kids who have been calling for stricter gun safety measures after 17 of their friends and teachers were murdered last week: Attack the kids not just as dupes of the liberal media, but as -- just maybe -- pawns of the Deep State conspiracy to undermine God Emperor Donald Trump. Here's a screencap of the original headline of Wintrich's hit piece on David Hogg, the Marjory Stoneman Douglas High School student journalist who interviewed other kids while they were hiding in a cafeteria office, and has since become one of the leaders of the student coalition planning protests for stronger gun laws:

The misspelling has at least been fixed, so don't you say they don't practice responsible journamalism at Gateway Pundit. Wintrich's hot take is a variation on a theme already developing in wingnutland: These kids seem too smart and articulate, so obviously, they aren't really; they're just reciting lines given to them by the media and Democrats. Here's a low-rent version of the argument from some idiot thought leaderer on Twitter:

Hey, NRA: The Kids Have Some Thoughts And Prayers For You Too

This is new. And while it never should have been necessary, it's inspiring.

Obviously, it's just impossible that high school students could ever come up with ideas themselves, so they cheated. Please ignore them, America. As Yr Wonkette said yesterday, it's almost certainly the other way around: These are smart kids who grew up with social media, and if national media show up with a camera, you bet they'll step in front of it, because they're grieving their friends, and they're pissed.

Lucian Wintrich is ON IT. Just look at how un-American these students are!

In less than a week since they survived a mass murdering gunman attack on their school, two student [sic] who quickly became media stars of the Parkland, Florida school shootings are now media obsessed to the point they say they are snubbing an invitation to meet with President Donald Trump this Wednesday in favor of appearing on a televised town hall with CNN’s Jake Tapper.

Oh, but the sharp mind of Lucian Wintrich has found the real scandal: David Hogg seems too smart for a teenager. What's more, he ADMITS his dad is part of the Deep State:

One student, in particular, David Hogg has been astonishingly articulate and highly skilled at propagating a new anti-Conservative/anti-Trump narrative behind the recent school shooting. Few have seen this type of rapid media play before, and when they have it has come from well-trained political operatives and MSM commentators.

Immediately, these students-turned-activists threw up some red flags.

In what was initially as an incredibly odd move for a high school student, Hogg’s vehemently defended the FBI and placed the blame squarely on the President’s shoulders…. before admitting that his father was in the FBI.

“I think it’s disgusting, personally. My father’s a retired FBI agent and the FBI are some of the hardest working individuals I have ever seen in my life,” proclaimed David Hogg to CNN.

“It’s wrong that the president is blaming them for this.” [emphasis in original -- Ed]

Shocking, we know. A kid admits his father's job, just right out there like that, as if that somehow excused him for dismissing Donald Trump's weird tweet suggesting the massacre happened because the entire FBI was going after Trump/Russia.

Oh, but that's not all! Wintrich seized on another thing Hogg said to PROVE David Hogg is not merely ignorant of basic matters of civics, but quite possibly too stupid to be allowed to ever speak in public again: You see, in defending his dad's Deep State buddies in the FBI, Hogg said Trump is "in charge of the FBI," which is just laughable. Boy, what a dumb kid!

Continuing, Hogg demonstrated his complete lack of American civics knowledge. A clueless Hogg appeared unaware of the fact that the President is not ‘in control’ of each department and branch of government, but must work and negotiate with them. Regardless, Hogg pushed the notion that Trump is in charge of the FBI.

Oh, but there's far more, says Wintrich. You see, kids, the FBI is actually the enemy of America, another basic fact Hogg failed to learn from his socialist teachers:

Anyone who has been following the news could tell you that many in the FBI have been working against the president from the start, with the most notable case involving collusion between the FBI, Obama Administration, and the Clinton campaign’s [sic] to push the false ‘verification’ of the junk Steele Dossier. It has also been widely reported that the FBI received tips well in advance of the Flordia [sic] school shooting and decided, for whatever reason, not to act.

The fault for this tragedy lies squarely on the shoulder’s [sic] of the FBI, who could have prevented this back in January.

Yes, that Hogg kid really lacks the basic knowledge any educated person should have, doesn't he? He'll never get a job as a rightwing conspiracy-mongering website's White House correspondent at this rate, that's for sure. Finally, to prove once and for all that this seemingly articulate high school kid is in fact a complete fake, Wintrich offers this video of Hogg being interviewed the night of the shooting, in which the young man stammers and the interviewer (or someone off-camera, at least) tries to help him frame his thoughts:

Wintrich doesn't see a nervous kid trying to collect his thoughts; he sees something far more sinister, although someone should probably let Wintrich know that "adding" to someone's credibility means making them more credible:

Adding to the credibility of Hogg, in a recently uncovered early cut from one of his interviews it appears he was heavily coached on lines and is merely reciting a script. Frequently seen in the footage mouthing the lines he should be reciting. Hogg becomes flustered multiple times, is seen apologizing, and asking for re-takes.

Stop the presses, a high school kid was flustered and got tongue-tied the night his friends were murdered. OBVIOUSLY THE WHOLE THING WAS SCRIPTED. Or maybe -- let's just make excuses for him since we're crazy liberals -- he was nervous and exhausted after a day in which people he knew were shot to death and the halls of his school were still bloody. That might lead to someone being a little bowled over, just possibly. But how can that be, since obviously, his father is a "retired" FBI agent (or so Hogg says -- they're all in it together).

Say, you know what you DON'T see in that video? David Hogg being coached to say anything about Donald Trump. Unless just being helped to articulate his account of last Wednesday's events is an "anti-Trump line." Or maybe that snippet is supposed to prove that every word Hogg said -- and by extension, all the words of all those meddlesome teenagers -- has been scripted for them by Hillary Clinton. That's probably it, as Wintrich's all- boldface closing paragraph screams:

Why would the child of an FBI agent be used as a pawn for anti-Trump rhetoric and anti-gun legislation? Because the FBI is only looking to curb YOUR Constitutional rights and INCREASE their power. We’ve seen similar moves by them many times over. This is just another disgusting example of it.

Yep, it sure is disgusting that these kids are turning their grief into an attempt to keep others from dying. Gateway Pundit's attack on grieving teenagers certainly hasn't gone unnoticed on the Twitters, which should get the site some hate-clicks at least. HuffPo's Ashley Feinberg makes the perfectly cromulent observation:

And Chelsea Clinton would like to suggest that maybe Jim Hoft and his merry band of idiots at least stick to picking on adults instead of teenagers, please:

Hey, at least no one will ever have to ask these creeps Joseph Welch's famous question to Joe McCarthy. Not only do they have, at long last, no sense of decency, they're making bank on it.

UPDATE: Well, of COURSE the Stupidest "Presidential" Son on the Internet has "liked" a rightwing twatter that repeats the same claims as the Gateway Pundit piece:

The story is almost certain to spread to Fox News, and by tomorrow or the end of the week, at the latest, we can look forward to the "president" of the United States trashing survivors of a school shooting himself. Are we great again, or what?

Yr Wonkette is supported by reader donations. Please click here to send us money. If you're the Deep State, isn't it time you ponied up?