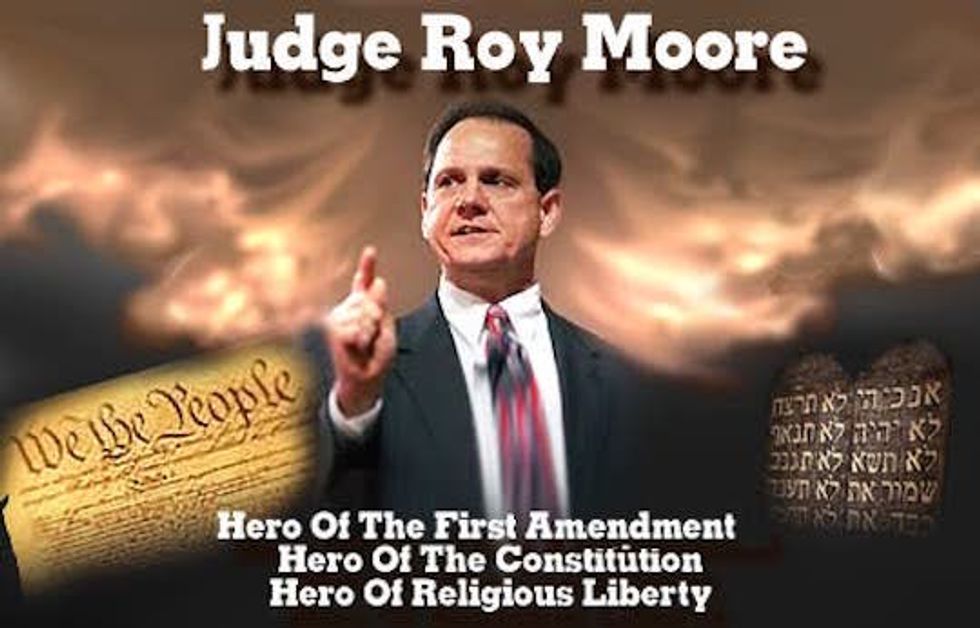 Ten Commandments Hero Chief Justice Roy Moore came from Alabama with a Brawndo on his knee t'other day, visiting the Lone Star State Monday to address a very important "Defense of Texas Marriage Amendment Rally,” where he said that he is willing to lay down his very life to stop people with the wrong combinations of genitals from entering into marriage contracts. Also, he is worried about all the hyperbole and exaggeration in the world today.

In what had to be the best laugh line of the day, Moore said that he felt compelled to speak at the rally, even though “normally judges don’t speak in public about issues like this.” This from a man who seems congenitally incapable of keeping a single thought about The Gay within the confines of his own head. You see, Moore explained, he was driven by not merely patriotism, but by the highest allegiance possible: His holy oath to God!

[If] I should hold back my opinions at such a time as this, I would consider myself guilty of treason toward my country and an act of disloyalty to the majesty of heaven which I revere above all earthly kings.

Honestly, Judge Moore, how about you give being silent a try -- maybe for as long as a day or two. We promise not to charge you with treason, we really do, you poor oppressed thing.

Moore told the story of William Travis, the Alabama hero who died at the Alamo to make sure that Texas would be free for slaveholders, and contemplated the possibility that he, too, might one day have to die so that others could remain unfree:

"He took a stand in the face of an enemy that was far more numerous, but he knew that he had to make a statement for the people of Texas and that he would give his life. I hope I don’t give my life, but I’m going to tell you this is a very serious matter.”​

“There’s today another threat, not only in Texas and Alabama, but across our country where state and federal court judges have overruled constitutional amendments passed by the people of those states, and people have just sat by and watched it out of fear of the federal government,” Moore said. “But nothing in the Constitution of the United States, nothing in the laws or precedents of the federal courts give federal courts any authority over domestic policy of family and marriage in the state of Texas, in the state of Alabama, or anywhere else.”

At least nothing other than the 14th Amendment, the Full Faith and Credit clause, Loving v. Virginia,Romer v. Evans,Lawrence v. Texas,Hollingsworth v. Perry or United States v. Windsor at least. Apart from those, plus all the federal court rulings against states in the past year, the man is absolutely right. We're still kind of wondering why Moore thinks The Gay Marrieds are going to start a shooting war where he'll have to be a martyr to the cause of stopping marriage equality, but it's awfully kind of him to help people understand that in the American system, if you think God puts you above the law, then it isn't really a law. Didn't Martin Luther King say pretty much the same thing? And look how a hateful progressive went and shot him, too!