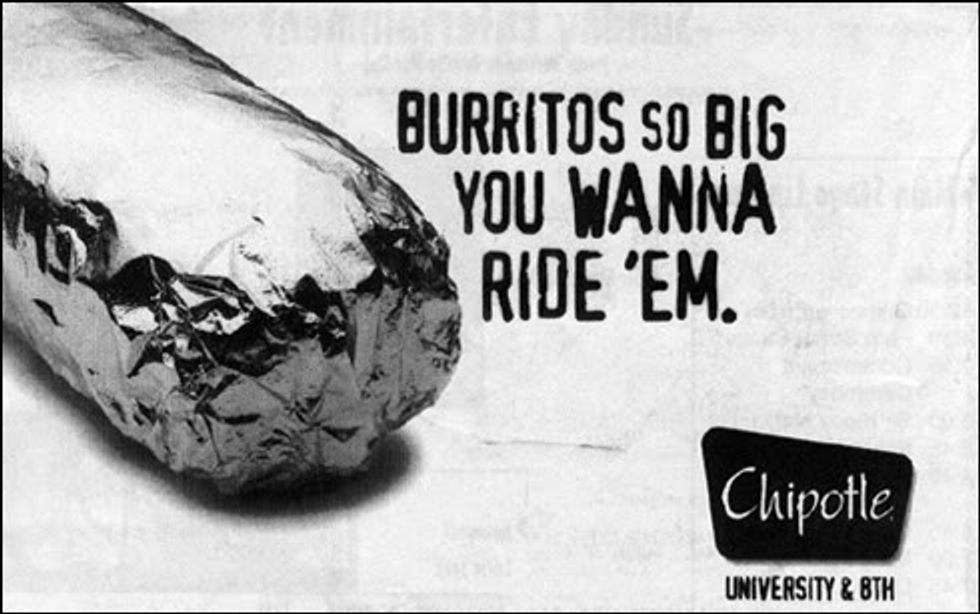 Sorry, CHIPOTLE. We bet you think you're real "cool" with your big phallic Gay Pride burritos and your fairy-pansy-literary bullshit on your bags, but Ben Shapiro's TRUTHREVOLT is here to lay the SMACKDOWN: you are a bunch of communists, and also you are stupid, so why don't you shove a giant cock down your throats already, oh you already did that's why! What's up, TruthRevolt? Do you have a masterpiece by the title of"I'd Like A Burrito With A Side Of Communism To Go, Please" for us? YOU DO?

Chipotle enlisted the help of authors and personalities who contributed sayings and stories -- or "little gifts to people" as [Jonathan Safran] Foer calls them -- to their to-go bags and cups in order for customers to "feel engaged."

Celebrities such as Sarah Silverman, Bill Hader, Judd Apatow all contributed. Apatow's bag says: "Don't be a jerk. Try to love everyone. Give more than you take. And do it despite the fact that you only really like about seven out of 500 people."

But the one that should raise the most eyebrows, even more so than Silverman's, was penned by author and Syracuse University professor George Saunders. Here is his bag:

Jesus, what a liberal dick, wanting people to not starve to death, time to JOIN THE REAL WORLD, HIPPIE!

One more question -- how long would Chipotle stay in business if everyone ate for free?

We don't know, maybe the same thing that would happen if David Horowitz stopped leaving money on your nightstand? Oh, right, Chipotle actually does capitalism, and does it pretty good, too! Maybe they can teach you all how not to be taker mooch tittysuckers someday, but probably not :(