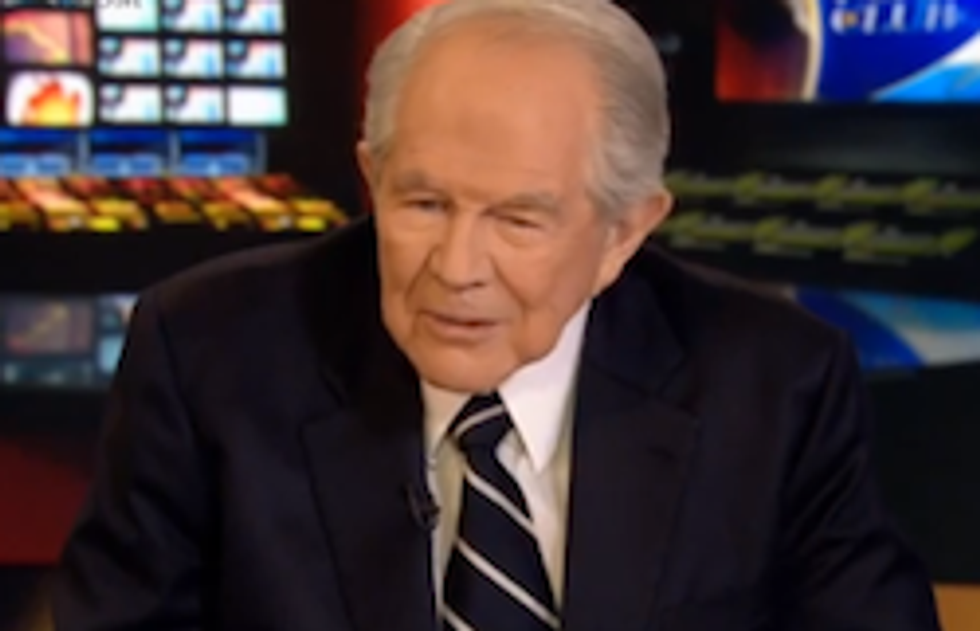 Huh. We did not see this coming. We are ... we are at a bit of a loss, in fact. We are looking out the window andnot seeing flying pigs, nor have we seen any reports on the Twitters about a severe temperature drop in hell. We just do not know what to make of the latest from Pat Robertson, he who hates everything and everyone, even orphans -- orphans, people -- because he's just got that much hate in his shriveled little heart. And yet, turns out Pat has a soft spot for the unlikeliest of people:

The 83-year-old televangelist sat down on Sunday for the "Bring It Online" advice portion of his Christian Broadcasting Network show, "The 700 Club." A viewer named David wrote in asking how he should refer to two transgender females who work in his office and have legally changed their genders. Instead of criticizing the trans individuals, Robertson approached the situation in a seemingly level-headed manner.

"I think there are men who are in a woman's body," he said. "It's very rare. But it's true -- or women that are in men's bodies -- and that they want a sex change. That is a very permanent thing, believe me, when you have certain body parts amputated and when you have shot up with various kinds of hormones. It's a radical procedure. I don't think there's any sin associated with that. I don't condemn somebody for doing that."

Yes, our minds are blown too. The man who can find sin in feminism, an Ivy League education, even fucking sweaters from Goodwill, says there's no sin in sex changes.

Now, to be clear before you start writing angry letters at us, we happen to agree (ugh, we cannot believe we are typing this!) with Pat Robertson. Your gender is your own damned business, as far as we are concerned, right along with the who and how of your sexytime, the god you do or don't pray to, and other dirty hippie free love stuff like that. But we did not expect Pat Robertson -- Pat freakin' Robertson -- to get his dirty hippie free love on when it comes to transgendered Americans.

And neither did his co-host, apparently, because when she tried to be all, like, (paraphrase) "Uh, Pat, don't we hate those sonsabitches? For Jesus?", Pat was all, like, (DIRECT QUOTE!) "It's not for you to decide or to judge."

Well, shit, yo, we were pretty sure Pat Robertson had built his entire eleventy billion year career on deciding and judging. In fact, we thought that was his whole goddamned raison d'être. Joke's on us, we guess, because the one -- the only one, as far as we can tell -- community of Americans Pat Robertson thinks is beyond reproach and shall not be judged is the trans community. We would applaud him for such a bold position if we did not think it's more likely because he confused "transgender" with "teddy bears" (though he probably hates the shit out of teddy bears too), or he forgot to take his meds that day, or if we were not concerned this is a sign that the apocalypse is pretty fucking nigh, or if the mere thought of applauding Pat Robertson did not make us instantly and violently ill.

Still, good on ya, Pat Robertson (ugh, that hurts), and thanks for forgetting to take your Ginkgo biloba, unless it's just the final step before the four horseman arrive, in which case, fuck you, Pat Robertson (ah, that's better), as usual.