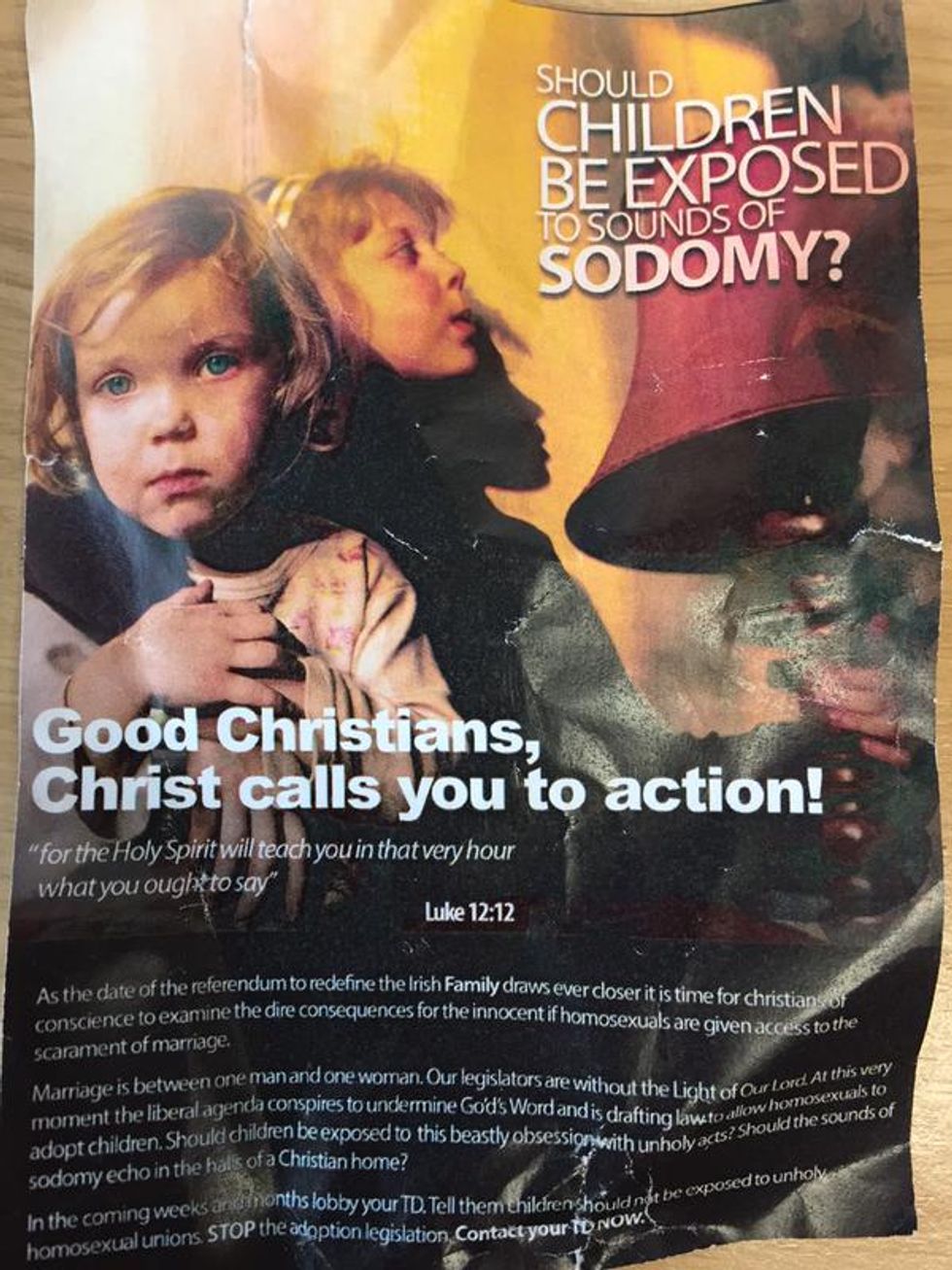 The good Christian people of Ireland have been lately pummeled with woe, on account of the fact that later this spring, voters will decide whether or not to let the homosexuals get married, to EACH OTHER, as if such a thing even exists.

Last August we learned, in a really, really awesome ad, that if the marriage equality law passes, the entire Irish nation will be ruled by homosexual zombies by 2017, forcing innocent heterosexing families to stay locked in their houses at all times, on account of all the equality. And, well, who could blame them, because as the ad pointed out, the gay zombie wedding cakes alone will be far too intimidating for any God-fearing heterosexual wedding cakes to compete with.

Well, now, it's gone and gotten even worse. Those straight families thought they could stay safe if they just boarded the doors and windows and locked the children in cages, but now an unnamed Christian group has started distributing pamphletsexplaining that the "sounds of sodomy" can pass right through the locks, climb up the stairs, Casper about a bit in the hallway, and finally get into bed with your innocent Irish children. Yes, the sounds of sodomy are soon to be echoing through all of the halls of Ireland!

"The sounds of sodomy! They're here!"

"They've brought the consequences for the innocent!"

Yes, the Irish children are soon to be terrorismed by all of the sodomy echoes, and how are the Eire-gays responding? Oh, they're just cold making gay jokes on the Twitter under the #soundsofsodomy hashtag, saying things like "my sodomy sounds like Cher!" and "my sodomy sounds like Madonna!" and "put all the things up in my butt really far!", but again, the imaginary Irish child I made up described it as "spicy Enya," so I'm going to keep imagining it like that. Also, that flip thing Dolores O'Riordan does with her voice is probably one of the sounds.

Of course, seeing as the pamphlet is being handed out by an "unnamed organization," there's a possibility that the whole thing is a brilliant PR campaign for this Austrian metal band called, appropriately, Sounds Of Sodomy, which would mean that the Irish children are safe from the gay zombies (until May, when Ireland votes to become a gay country), and all of this is one big trick to get some new Facebook fans for the band. Or maybe we're all trapped in a scene from a lost Frank McCourt novel. Or maybe there really ARE gay zombie sodomy echo ghosts, and all of Ireland is in danger and these nice anonymous Christians are just trying to warn everybody.

Answer: All of the above, probably.