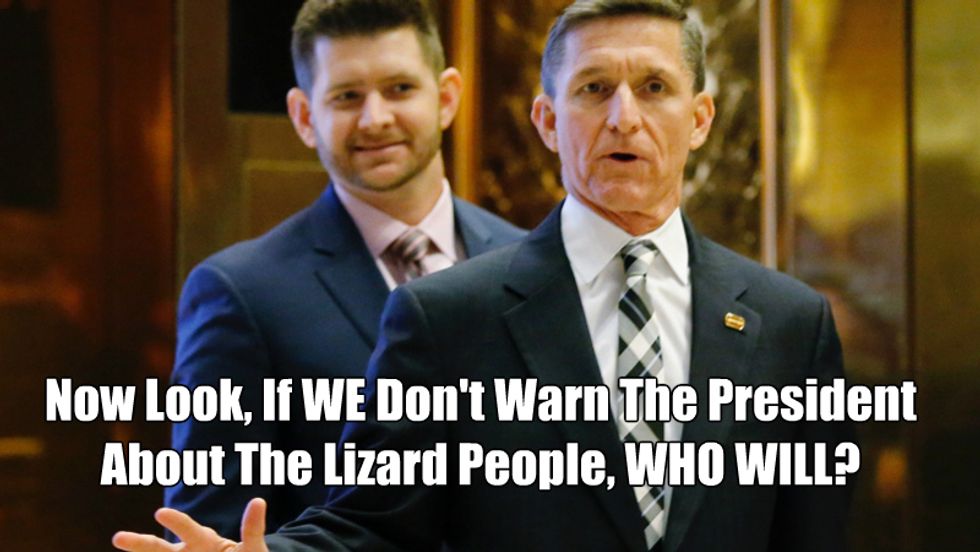 Somebody has to keep on top of what's really going on.

Sunday's attack on Washington DC's Comet Ping Pong pizzeria by a guy who just wanted to see for himself whether Hillary Clinton was running a child sex slavery ring in the basement (the place's owner says it doesn't even have a basement, but he would, wouldn't he?) was plenty weird enough. But just to add that extra frisson of stupidity and surrealism, of course, we also learned that the story of Hillary Clinton and John Podesta's nonexistent child sex ring was on the radar of Donald Trump's pick for national security advisor, Gen. Michael T. Flynn, and his son, Michael G. Flynn, who served as his dad's chief of staff and who also continued to tweet about the completely fake story even after Sunday's attack, and even argued via Twitter with CNN's Jake Tapper about the veracity of the story. Which led a lot of people to wonder: Just WTF was Flynn fils, who apparently has a non-monogamous relationship with reality, doing with a Trump transition team email account? Well, at least now we know the answer, sorta kinda: After Trump transition chair (and VP-elect -- he's busy, OK?) Mike Pence initially said the younger Flynn was not on the Trump transition team at all, Pence later clarified Michael G. Flynn was "no longer" on the transition team. So that's cleared up: Gen. Flynn has apparently placed his son in a blind trust. Still not clear, according to Jake Tapper, is whether the reality-challenged Flynn boy was fired or asked to resign.

Oh, but wait, there's more on just what a fine, upstanding young man the Trump transition team had working for it, helping his dad with scheduling, administration work, and all the latest conspiracy theories, too. In fact, according to a November 17 CNN story, little Mikey was a huge fan not just of conspiracy theories, but also of "expletive-filled posts, and racially insensitive sentiments on Twitter and Facebook," so he seems nice. Among other fun conspiracy stories he shared with the world were the news that Huma Abedin was secretly allied with the Muslim Brotherhood (although that one, while false, is practically mainstream for many elected wingnuts), that Marco Rubio was a coke-snorting closeted gay, that Bill Clinton would soon face indictment for raping a teenaged girl, and of course that Barack Obama showed off a boner to lady reporters on Air Force One. He's also a HUGE fan of "alt-right" conspiracy theory loony Mike Cernovich, a guy who makes Alex Jones seem pedestrian and restrained (albeit only by comparison). And of course, he regularly used the "alt-right" slang term "cuck," because all the cool kids did. And of course he labelled everyone from Saturday Night Live to Barack Obama communists, because duh, everyone's a communist.

He also has an account on "Gab" -- the white-supremacist-approved alternative to that mean old Twitter, where he likes to follow white supremacists, for "truth" and "freedom" and "the white race," we guess.

So now poor Baby Flynn is apparently no longer welcome in the Trump transition, at least not during office hours. His dad, though, is still on track to be the next American president's National Security Adviser, even though Gen. Flynn appears to be every bit as enamored of fake news as his son. Politico found that Flynn had posted a total of 16 completely fake stories on his Twitter feed just since August 9 -- not just the bogus Clinton-Podesta sex cult story, but also stories that Clinton

has "secretly waged war” on the Catholic Church, as well as charges that Obama is a “jihadi” who “laundered” money for Muslim terrorists.

In addition, Flynn has retweeted fake stories that Hillary Clinton had been named an "insider threat" by the Army, and passed on a warning about a favorite wingnut conspiracy hoax, that the UN plans to outlaw Christianity under "Agenda 21."

Gosh, that doesn't really sound like someone who you want advising a president on national security. We dunno, maybe we just have ridiculously elitist standards or something. Hell, Condi Rice exaggerated -- OK, lied about -- the threat of Iraqi weapons of mass destruction, but at least she never tried to convince George W. that Saddam Hussein was secretly having naked bunga bunga parties with Elvis on a UFO. Then again, those were simpler times, when we were fairly certain that the president was merely a bellicose, cynical idiot, not a narcissistic pathological liar who surrounds himself with genuinely unhinged people who can't tell reality from an online hoax.

When Lily Tomlin said "What most people call reality is only a collective hunch," it was supposed to be a joke.