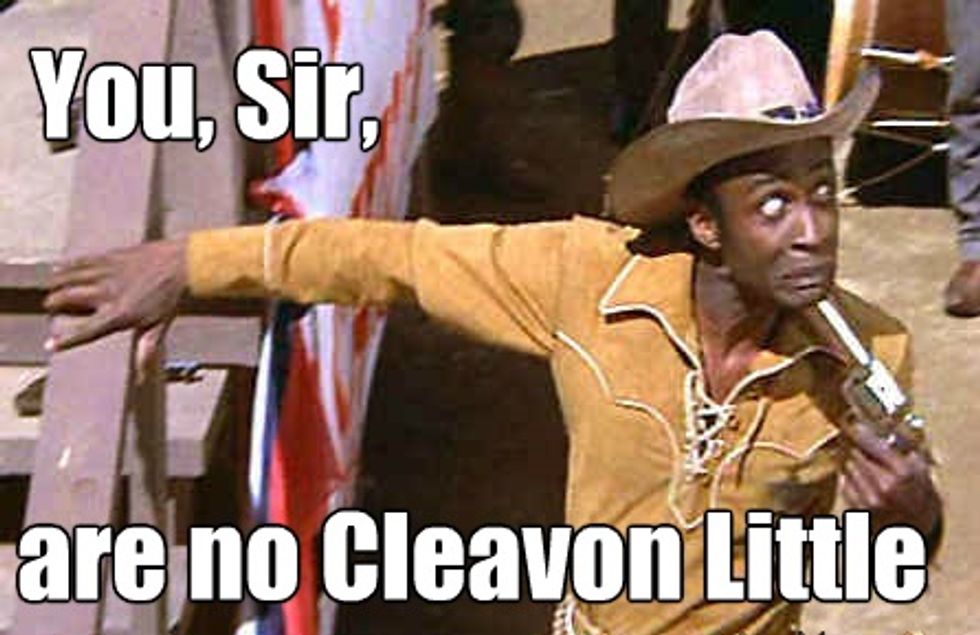 OK, so shutting down the government didn't work, and the House repealing it umpty-eleven times didn't work, and the websitedoes work, but maybe it's not too late for states to save their citizens from the horror of having health insurance. They could maybe try the genius plan introduced in the Missouri Senate by state Sen. John Lamping:

The bill would suspend insurance companies’ state licenses if they accepted subsidies offered by the federal government to help pay health insurance premiums for low- and middle-income Missourians.

See, Lamping figures that the subsidies are illegal and will totally be declared unconstitutional by some mythical Supreme Court that already found the Affordable Care Act was constitutional. So if you preemptively act as if they are illegal, and punish insurance companies that accept them, somehow that will make the employer mandate go away, hooray! And if insurance companies do comply with the law and accept the subsidies, they'll be prohibited from doing business in Missouri, and then once the insurance companies are all gone, everyone will be healthy forever.

We're not entirely sure that Lamping has thought this through.

This is only the latest in a number of attempts by Missouri to make a federal law cease to exist. Missourians voted in 2010 against the individual mandate, which meant nothing, because do they even know what a federal law is? And then in 2012 they voted to not set up a state exchange, which once again stopped Obamacare dead in its tracks. But hey, if they actually manage to strip licenses from the only two companies selling plans on the exchange in Missouri, Anthem Blue Cross Blue Shield and Coventry Health Care, then that should pretty well make Obamacare unworkable, as well as leaving huge numbers of Missourians without insurance through their employers. That should make everyone happy.

Lamping says he didn't think of this smart plan all by himself. He had some help from Cato Institute health policy weasel Michael Cannon, who encouraged a whole bunch of states to refuse to set up exchanges in the hope that a pet wingnut theory would manifest itself into reality -- the contention that the ACA says that subsidies apply to policies purchased "through an exchange established by the state," so those sold on the federal exchange are absolutely barred from getting subsidized, because magic. If people in the 34 states that have refused to set up their own exchanges aren't subsidized, then supposedly they'll be so angry about paying full price that they'll storm Washington and demand an end to tyranny or something.

Or the Department of Health and Human Services could do what it has already done, and issue directives that all qualifying policyholders would get subsidies, seeing as how that's pretty much the point of the law.

It's uncertain whether the bill is likely to make progress in the Missouri lege; if it fails, opponents of Obamacare may resolve to contract expensive chronic illnesses to bankrupt the system. That'll show the meddling federal bastards.

[St. Louis Post-Dispatch via a tip from Wonkette Operative "CM"]