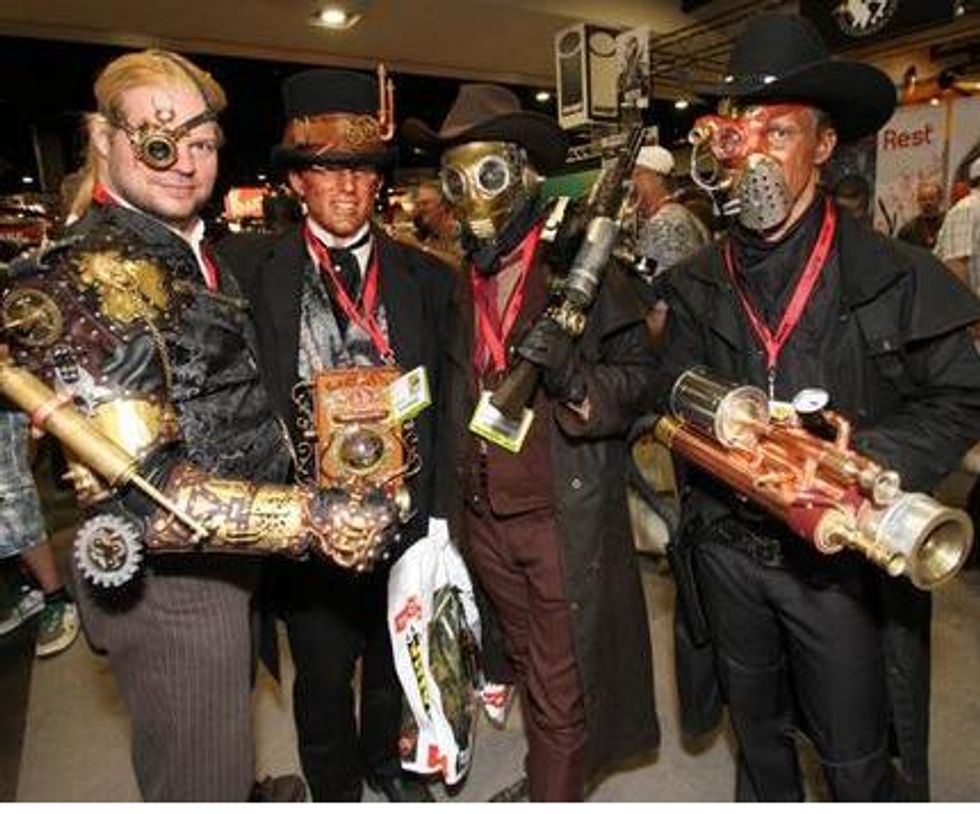 (updated with correction; see note at end) So, what new amazing tales of actual history as she truly happened does floppy-brained fact buggerer David Barton have for us this week? As you may recall, Barton, the Christianist "historian" whose recent book on Thomas Jefferson was so full of fabrications that his own publisher recalled it, was recently featured in Your Wonkette when he claimed that the real problem with guns in U.S. America is that we simply don't have them with us at all times -- after all, he reasoned, in Colonial times, when everyone had a muzzle-loader at the ready, there aren't any accounts of accidental shootings, so if everyone today were to keep a 9-millimeter in their waistband, almost nobody would ever shoot his Glock off.

Well, it turns out that the topic of guns is pretty darn popular at the moment, so Barton has been having himself a fine old time with tales of how in America's Good Old Days, an armed populace kept everyone happy and free. Arm teachers? Better yet, why not arm the kids, too? As we see in the video up top, that idea is grounded in the very best Authentic Frontier Gibberish available -- after all, it convinced even a skeptical tough guy like Glenn Beck! This week, we learned that Barton's tale appears to come from an unimpeachable source of knowledge on the Old West -- a 1979 novel by Louis L'Amour, Bendigo Shafter.

Barton told Beck this charming true tale of how guns keep good people -- even kids! -- so very safe and free from worry:

“The great example, in the 1850s you have a school teacher who’s teaching. A guy — he’s out in the West — this guy from New England wants to kill him and find him. So he comes into the school with his gun to shoot the teacher, he decides not to shoot the teacher because all the kids pull their guns out and point it at him and say, ‘You kill the teacher, you die.’ He says, ‘Okay.’ The teacher lives. Real simple stuff. Saved the life of — there was no shooting because all the kids — we’re talking in elementary school — all the kids pull their guns out and says, ‘We like our teacher. You shoot our teacher, we’ll kill you.’”

It's pretty inspiring, isn't it? And absolutely true, because David Barton is a real historian and all. Chris Rodda, who has made something of a second career out of fact-checking Barton, suspected that the story might be bogus, but since Barton seldom names his sources, Rodda doubted she* would be able to determine one way or another. But then a commenter on her blog pointed out the similarities to the L'Amour novel, which Rodda snapped up online.

Turns out that the plot involves a gunfighter named Drake Morrell, who escapes a death sentence for murder and assumes a new identity as a teacher in Wyoming. And sure enough, an Easterner named Stacy Follett tracks down Morrell to avenge the deaths of two friends many years before. Years later, the novel's narrator asks Follett what happened when he confronted Morrell at the schoolhouse:

… And then I looked at him over my cup. “Did you kill Drake Morrell?”

He chuckled again. “Decided agin it.” He sipped his coffee. “You know somethin’? After he started that there schoolteachin’ I figured I had him dead to rights. I laid out for him, waitin’ until he was out of school, and when he come out the door, I shaped up with my old Betsy girl here” — he slapped his rifle — “right on his belly. I had him where he couldn’t move. There was youngsters all around him, and he stood there lookin’ at me and never turned a hair. He had sand, that Morrell.”

“Has. He’s still around. You want to know what happened? I nigh got myself kilt. Five or six of them youngsters, weren’t but two of them upwards of twelve or thirteen, they outs with their six-shooters and had me covered.

“They told me he was their teacher and he was a mighty good one and if I shot him they’d fill my hide.”

He chuckled again. “An’ you know somethin’? They’d of done it, too.”

“Nothin’. I pulled down my flag. Pulled her down right quick. I never seen so many youngsters with six-shooters.”

Rodda has emailed Barton's Wall-Builders website to ask Mr. Barton to explain where he got the story, if not from a 1979 novel by Ronald Reagan's favorite author.

In the meantime, we hear that David Barton has been reading some steampunk. We have managed to obtain a photo illustration from Barton's upcoming work of history, They Died With Their Goggles On, in which he explains that mechanically-enhanced Christians tamed the frontier through both their steadfast faith in the God of the Bible, and their fierce determination to glue brass gears on every object in sight.

* CORRECTION: Thanks to alert commenter "rebeccavegas" for pointing out we got Chris Rodda's gender wrong the first time through; one or two other pronouns have been retroactively corrected. Chris Rodda is a woman of the female persuasion, and we are red-faced with shame for having assumed otherwise.

[This Week in Christian Nationalismvia a tip from "Lisa"]

Check out Wonkette on Facebook and Twitter and even on Tumblr. And if you're better than David Barton at telling truth from fiction, you could win Carl Kassell's voice on your voicemail, or at least follow Doktor Zoom on Twitter, also, too.