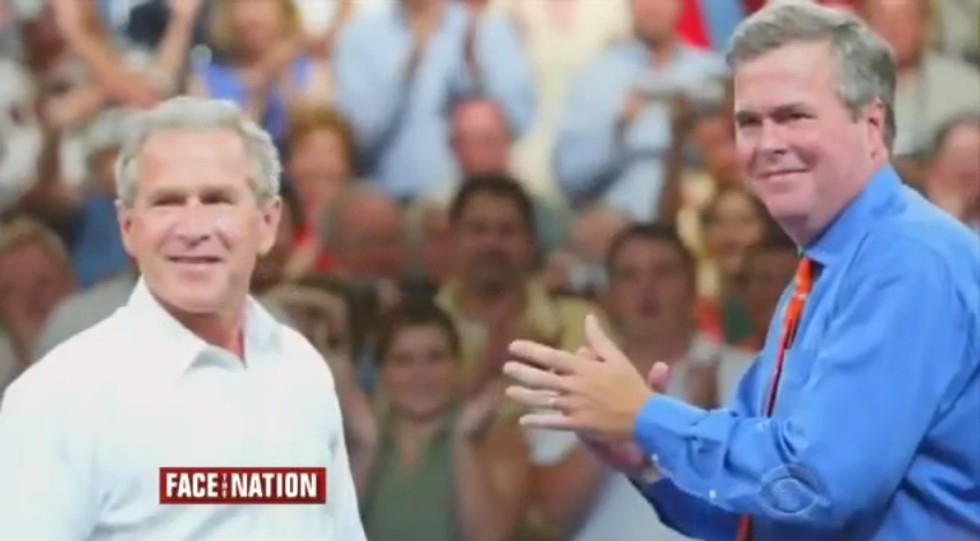 Here's some shock-and-awing political insight from the man who never had a gig his daddy didn't set up for him. From the champagne unit of the National Guard, to the Texas governorship, to the state of Florida his brother rigged for him, to the special one-time-only Bush v. Gore present gifted by the Supreme Court, we are pretty certain George Dubya Bush never would have usurped his way to power if not for his powerful family. But no! Turns out that he's just a regular schlub who had to earn his way to the top, and if Jeb "the smarter one" Bush wants to have his turn at playing president, he'll have to earn it the old fashioned way too.

"I think you have to earn your way into politics. I don’t think anything’s ever given to you," Dubya told CBS's Bob Schieffer in a lovely little chit-chat on Sunday. It'll be especially hard for anyone to just give Jeb the White House in 2016, since none of his family members are in a position to steal a state the way Jeb did for his big brother in 2000.

And as to whether it's even worth it for Jeb to run? Well, we already know his mom Babs thinks it's a bad idea, although she's started to come around and is no longer threatening to cut off his allowance. But Schieffer wants to know the Bushes' "unique perspective" -- on account of how every single Bush has run for office and totally earned it all on his own -- regarding this critical question: "Is it worth putting the family through it?"

Why don't you enlighten us, Laura?

Well, that’s, you know, that’s what every candidate has to think about because it is -- and even since George and I lived at the White House, the social media’s increased so much, and lots of mean and terrible things on the internet about every family member, which even we didn’t have. But I think that, you know, that everyone has to weigh that.

Sure, in the good old pre-internet days of the second time we had a Bush in the White House -- a position he earned all on his own, in case you'd forgotten -- nobody was mean on the internet. Remember what fun we never had with our constant mocking of The Drunk One and Not-Jenna? Or this?

Schieffer also observes that gosh, politics sure has gotten meaner since whenever he remembers a time when it wasn't mean, which obviously doesn't include that time Aaron Burr dueled Alexander Hamilton to death, but in a not-mean way, or the time that fella beat a senator with his cane on the Senate floor, but also really nicely. Dubya then agrees or maybe doesn't agree, it's hard to know, because as usual, the words tripping out of his mouth do not actually form a coherent sentence in response to the question asked. Which is nice that some things haven't changed from the old days.

In the older days -- I hate to be one of these guys who talk about the old days -- you’re able to do that yourself, by the way -- people were held to account for what they said. In other words, there was a pushback. Now there’s just so much stuff out there, flotsam out there, that people say what they feel like saying without any consequence.

How is that an answer to the question of whether all the young kids these days on the interwebs have suddenly turned politics into a mean and dirty business? Who knows? But times sure have changed, because Bush remembers a time when he was not allowed to get away with saying whatever the hell he wanted, truth and/or compassion be damned, and people totally challenged him on that and held him accountable and he had to face consequences. Like that time he said Saddam Hussein had weapons of mass destruction, and everyone in America nodded along and said he must be right, and even when he had to admit he was wrong, no one thought that was really his fault so he should totally be re-elected again forever, and besides, have you seen how studly he looks in a codpiece?

It's no surprise that Laura and George are eager to do whatever they can to help Jeb finally get his turn being The Decider, which he will of course have to earn all on his own, without the benefit of his family dynasty, his family name, or the fact that both his dad and his brother "earned" the first name "President." Even if Jeb wants them to shut up and go away and be very quiet and please, pretty please, do not remind anyone in America that they are related, George is happy to do that and just stick to his painting. He's earned his peace and quiet, you know.