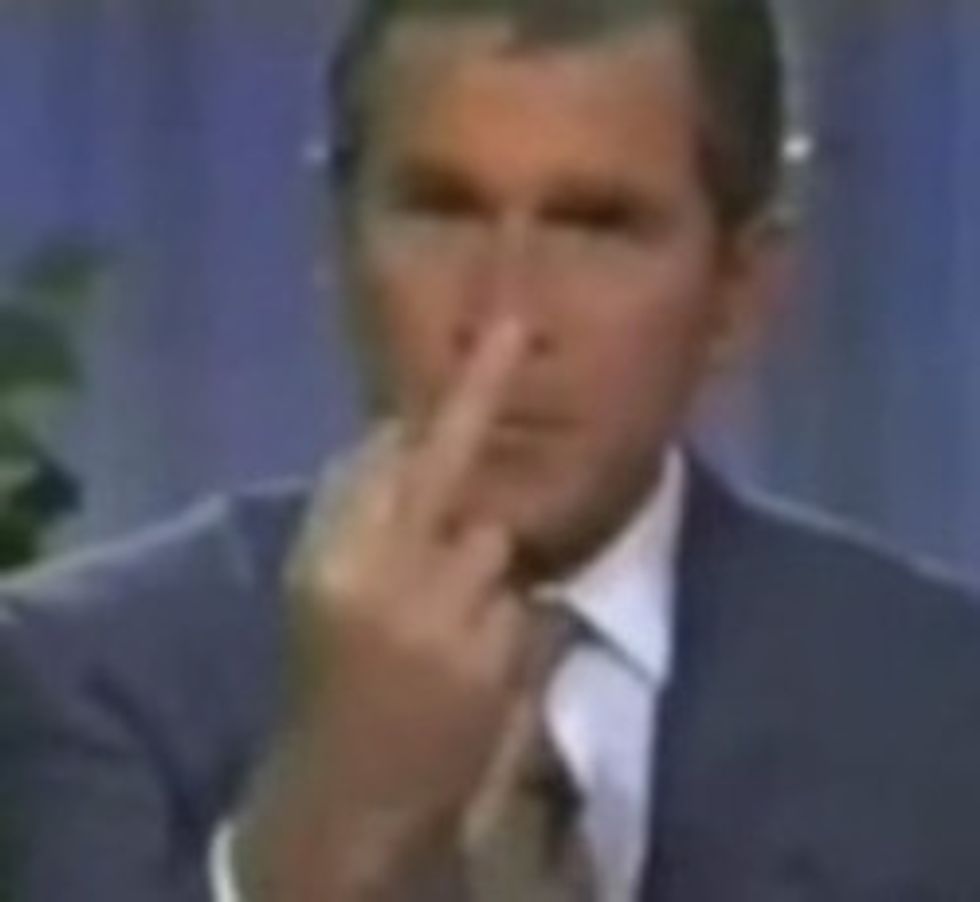 George W. Bush can fuck himself.

That sentiment doesn't really need context, does it? Pick your reason. There are many. So many. A million kinds of many.

But today, we have a new reason to add to the endless list of why George W. Bush can fuck himself.

He slammed Guccifer, the hacker who intercepted the Bush family's emails and first revealed some of Bush's paintings, in an interview with his daughter Jenna Bush Hager airing Friday on NBC's "Today."

"I was annoyed. It's an invasion of one's privacy," he said. "And yeah, I was annoyed. And nor do I want my paintings to get out."

See, back in oldey-time times, we have vague memories of Bush -- who can fuck himself -- not giving much of a damn about privacy. Like that time his administration spied on Quaker anti-war protesters, who were against his stupid war and therefore had surrendered their right to privacy because of how they were against his stupid war. He used this ridiculous thing called the Super Duper Jesus Bless America PATRIOT Act for Patriotic Patriots Who Are Patriotic to listen to phone calls and read email and spy on whatever American his administration deemed The Enemy (you know, like Quakers), even though he'd already secretly ordered the NSA to do that anyway, without warrants, which are things you are supposed to obtain in order to do spying, but that's just a dumb legal thing, and legal things ceased to matter under Bush -- who can fuck himself -- because 9/11 9/11 9/11 terrorist terrorist terrorist 9/11. He also signed the FISA Amendments Act, which allowed him to make phone companies turn over all their records so he could read your sexts and emails if he thought you were maybe trying to do terrorism. Maybe. Like, if he had a hunch. You know, like how he had a hunch we should invade Iraq, even though he was wrong about that, which is another reason Bush can fuck himself.

The odds that we will ever know the full extent of Bush's spying-on-Americans-but-just-the-terroristy-kind-wink-wink program are, let's see ... carry the one, divide by never ... ah, right, zero. But we know he invaded the shit out of the privacy of plenty of Americans, and he didn't care. No one in his administration cared. None of his supporters cared. Why should you care if the president is listening to your conversations unless you have something to hide, hater? Besides, the security of America, as defined by the assholes who shrugged and meh'd at terrorist threats and then lied us into a war in a country that had nothing to do with anything, trumps your petty little privacy concerns. Hater.