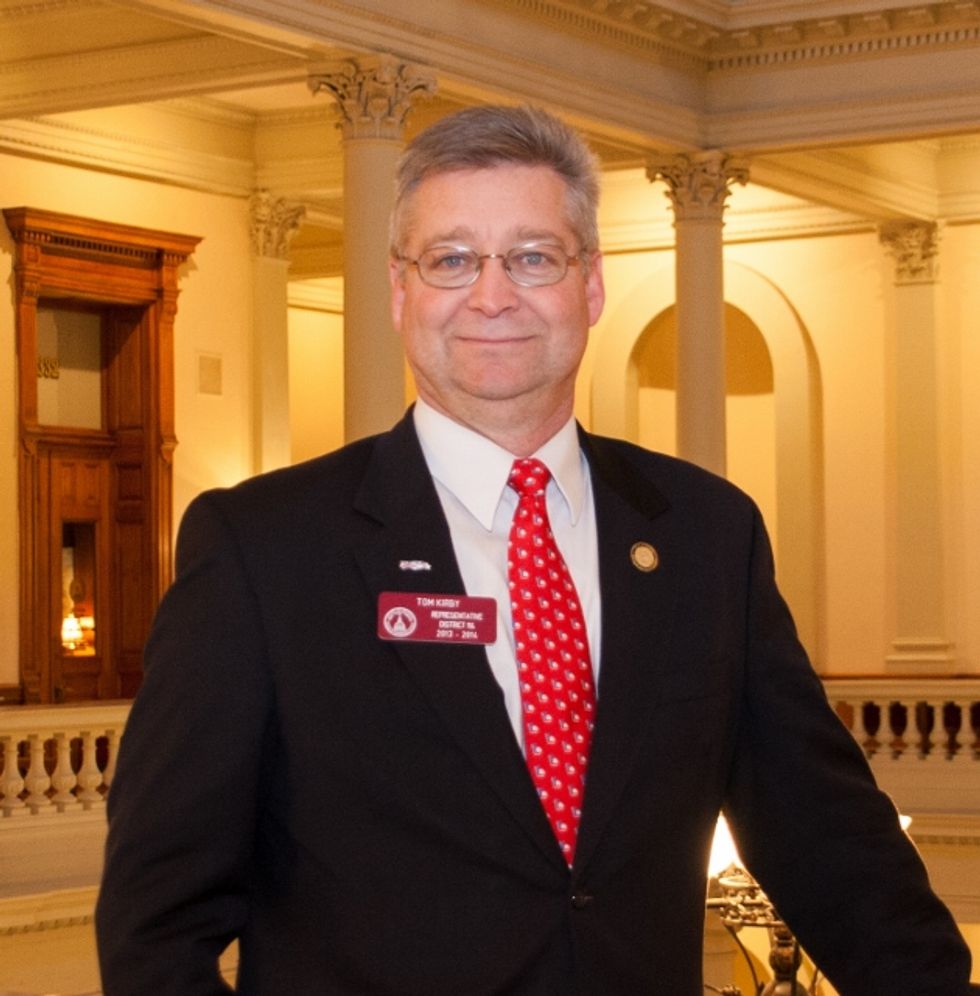 Never say that Georgia Republican Tom Kirby isn't fighting for What Matters. Many politicians enter public service because there is something in their hearts that compels them to do it, for the good of their people, and Georgia state Rep. Tom Kirby is no exception. He will protect Georgians from the scourge of human jellyfish fetuses, because that his is calling in life! You didn't know this was a problem affecting Georgia? That is because you are clearly stupid, let Tom's website (the URL of which inexplicably ends with "pretty photo") tell you:

We in Georgia are taking the lead on this issue.

Unlike the other 49, who are carelessly letting the glow-in-the-dark people run wild.

Human life at all stages is precious including as an embryo. We need to get out in front of the science and technology, before it becomes something no one wants. The mixing of Human Embryos with Jellyfish cells to create a glow in the dark human, we say not in Georgia.

Leave that to South Carolina or Alabama, let Lindsey Graham and Alabama's Chief Justice Roy Moore glow like gay nightlights, NOT IN GEORGIA. We are relieved that Tom will help us GET IN FRONT OF SCIENCE, because we all know what happens when science is in front of you, you learn things and make breakthroughs and suddenly everybody starts evolutioning each other, right in front of the children, NOT IN GEORGIA!

Tom just wants to make sure that when we do science, we are not destroying embryos, because Abortion, but we did not know that "light it up" was a third option between "let it become a beautiful baby" and "kill it!"

Here is another thing Tom is working on:

Kirby also introduced legislation last week that would make it unlawful for "any person or entity to intentionally or knowingly create or attempt to create an in vitro human embryo by any means other than fertilization of a human egg by a human sperm."

A reporter from a Georgia news station caught up with Kirby to ask for an explanation of his bill and why someone might want to mix human and jellyfish DNA.

"To make them glow in the dark is the only thing I know of," he told Channel 2.

Yes, because all the other liberal uses for jelly-people hybrids are a secret, and we are Not Telling. We are relieved, though, that his bill only bans INTENTIONALLY creating a human embryo with something other than a sperm and egg, because what if we are in Georgia and accidentally create one while we are cooking? Don't wanna go to jail for that, I was just trying to make falafel!

He also said he has not seen evidence that anyone in Georgia is trying to create human-jellyfish hybrids. "I've had people tell me it is, but I have not verified that for sure," Kirby said. "It's time we either get in front of it or we're going to be chasing our tails."

"We're going to stand up and say that Frankenstein-type science is not going to happen in Georgia anymore," Kirby said. "That's something that we really need to get rid of here."

He has not seen evidence, you guys, of anyone in Georgia doing the people-jellyfish, but it's something that we "really need to get rid of" and that "is not going to happen in Georgia anymore." You know that thing when you are having a hard time making a joke because the joke is already written? That is happening to your Wonkette right now, it is tough. Also, you don't want to be chasing your tails on this issue, because you know who ELSE has a tail? Jellyfish. (No they don't.)

Kirby also says in this here video that he is concerned about getting jellyfish embryos to do sex to cow embryos, effectively making glow-in-the-dark cows, and that is A Outrage, because that is cheating at the rules of Cow Tipping, it's not fair if one team's cows glow and the other ones don't.

Anyway, nobody send Tom this article about how humans actually ALREADY glow in the dark, it will give him wingnut nightmares and he will wake up crying, because he is such a dipshit.