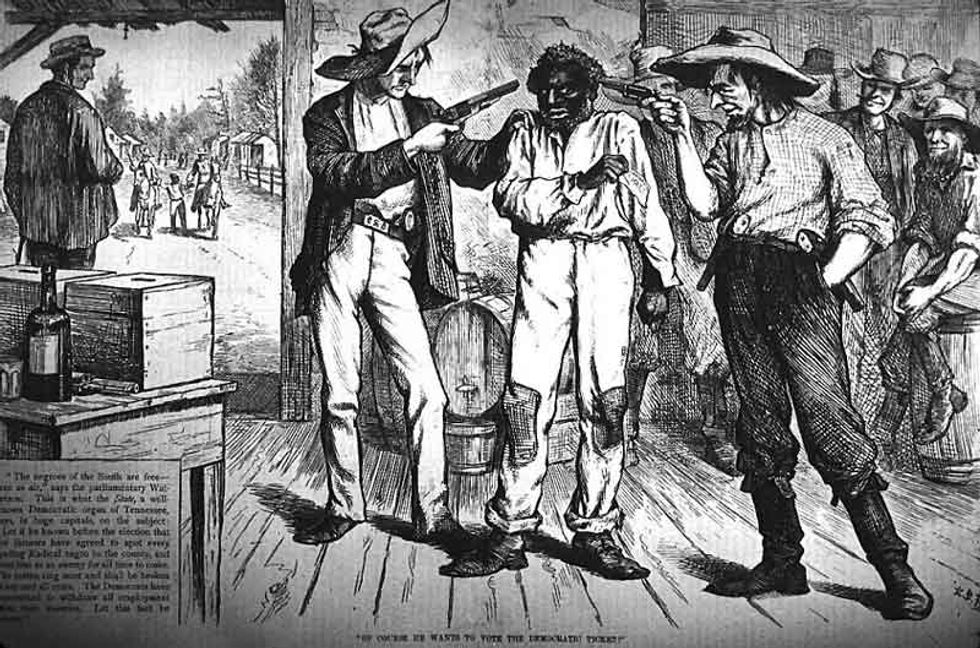 Original caption is 'Of course he wants to vote the Democratic Ticket.' Please add your own Robert Byrd comments.

Just when we were on the verge of celebrating a string of court victories against discriminatory voting laws in Texas, Kansas, Wisconsin, and North Carolina, along comes the The New York Times to harsh our mellow. Monday, the paper ran a terrific, blood-pressure-raising story about voter suppression efforts taking place at the county and municipal level, where keeping minorities from voting often takes a much more artisanal, hands-on approach than statewide laws aimed at throwing up barriers to large numbers of minority voters. Take, for instance, this charming example of good old voter intimidation with a personal touch from Sparta, Georgia:

When the deputy sheriff’s patrol cruiser pulled up beside him as he walked down Broad Street at sunset last August, Martee Flournoy, a 32-year-old black man, was both confused and rattled. He had reason: In this corner of rural Georgia, African-Americans are arrested at a rate far higher than that of whites.

But the deputy had not come to arrest Mr. Flournoy. Rather, he had come to challenge Mr. Flournoy’s right to vote.

The majority-white Hancock County Board of Elections and Registration was systematically questioning the registrations of more than 180 black Sparta citizens — a fifth of the city’s registered voters — by dispatching deputies with summonses commanding them to appear in person to prove their residence or lose their voting rights. “When I read that letter, I was kind of nervous,” Mr. Flournoy said in an interview. “I didn’t know what to do.”

At a time when so much vote suppression is left to wide-scale bureaucratic ratfucking, it's heartening to see that small-town inhospitality still has a place. A lawsuit filed against the board of elections claimed the individual questioning of black voters was part of an effort to give white candidates a hand in municipal elections, and wouldn't you know it, last November a white candidate won the mayoral election.

“A lot of those people that was challenged probably didn’t vote, even though they weren’t proven to be wrong,” said Marion Warren, a Sparta elections official who documented the purges and raised an alarm with voting-rights advocates. “People just do not understand why a sheriff is coming to their house to bring them a subpoena, especially if they haven’t committed any crime.”

Just imagine that! Guess the Republicans are right when they say that local-level government can do a lot of things more effectively than state or federal agencies. If an entire state set out to intimidate black voters on a personal level, it would be a big unwieldy mess, and worse, would attract unwanted attention from the press, probably. But a local effort to fuck over minority voters one by one? That shows you care about every single vote. No, no, every single voter, says Republican county attorney Barry A. Fleming, who's also a state representative. He explained the individual checks on voters' addresses were merely an effort to "restore order" to a big ol' mess in the county's records, which had gotten all fouled up by "corruption and incompetence." Also, he added, it couldn't have been an effort at voter suppression, since only a few people were kicked off the voter rolls. Soooooo...the system was a total mess, but it didn't need a lot of fixing? And by some extremely odd set of circumstances, it was only the city's black voters whose records were all mixed up, huh?

“The allegations that people were denied the right to vote are the opposite of the truth,” he said. “This is probably more about politics and power than race.”

Maybe the politics and power of Republicans who wanted to run city government. And who happened to be white.

The Times notes that such creative local-level electoral ratfucking would have needed pre-clearance from the U.S. Justice Department prior to the 2013 Supreme Court case that gutted the Voting Rights Act. Under the old rules, the Sparta effort might well not have been approved, because Washington Bureaucrats don't understand that sending armed deputies to make black people prove their eligibility is just good old Southern friendliness, albeit a bit less overt than that time in 1964 when the sheriff in Philadelphia, Mississippi, personally saw to it that those three civil rights workers reached the proper destination. But since the Court decided three years ago that racial bias no longer exists, Republicans at all levels have had a fine old time thinking up new ways to put it in place. And without the preclearance requirements, discriminatory voting laws have to be challenged on a far more expensive case-by case basis after they go into effect. Heck, they might not even get noticed at all!

Fittingly, since the 2013 case started with a challenge to the Voting Rights Act by Georgia's Shelby County, Georgia has seen some of the most widespread voter suppression measures, which are almost always sold to voters and elective bodies as efforts to eliminate fraud, where "fraud" equals "too many blacks voting." There's a federal lawsuit accusing the state of being a tad overzealous in purging voter rolls: "in a recent two-year period, the 372,000 voters scrubbed from the rolls exceeded the number of new voters who were added." Not a thing wrong there, says Secretary of State Brian P. Kemp, who says the lawsuit is frivolous and -- big surprise -- insists tough measures are needed to combat voter fraud (which is virtually nonexistent, as we mention EVERY. GODDAMNED. TIME).

Kemp himself is a real sweetheart, too: He makes a habit of opening criminal investigations of voter registration drives, especially if they're run by minority organizations. In 2014, he investigated a drive that registered 85,000 new voters, most of whom were minorities. He found a whopping 25 registrations with problems, and filed no charges. See? Keeping Georgia safe!

Hancock County has really tried some wonderful stuff prior to its purges of the voter rolls: Initially, it wanted to close all but one of its 10 polling places, so blacks in rural parts of the county would have to travel to Sparta to vote. After the NAACP complained, the board closed down only one location, but then started checking registered voters' stated addresses agains state driver's license records. White members of the board eventually challenged registrations, and struck 53, almost all of them black. But they took a home-town approach to it all, according to the lawsuit:

As a “courtesy,” court papers state, county sheriff’s deputies served summonses on the targeted voters, commanding them to defend themselves at election board meetings.

Some did, and were restored to the rolls. Others reacted differently to a police officer’s knock on their door.

“A lot of voters are actually calling to say they no longer wish to be on the list, so now we have people coming off the list who no longer want to vote,” Tiffany Medlock, the elections supervisor for the Hancock County elections board, told a Macon television reporter in late September. “It’ll probably affect the City of Sparta’s election in a major way.”

Well it's hardly the county's fault if the ungrateful blacks don't appreciate the voting board's concern for the security of their vote, now is it? Then, like a bunch of loserpants babies, the NAACP sued, and a federal judge agreed the action had been discriminatory. Twenty-seven of the disenfranchised voters have been restored to the rolls, although the rest have not yet been located. It is unclear why they might be leery of county officials coming out to help them. Maybe if the voting board reps could try dropping by in a friendly sedan instead of an armored Humvee?