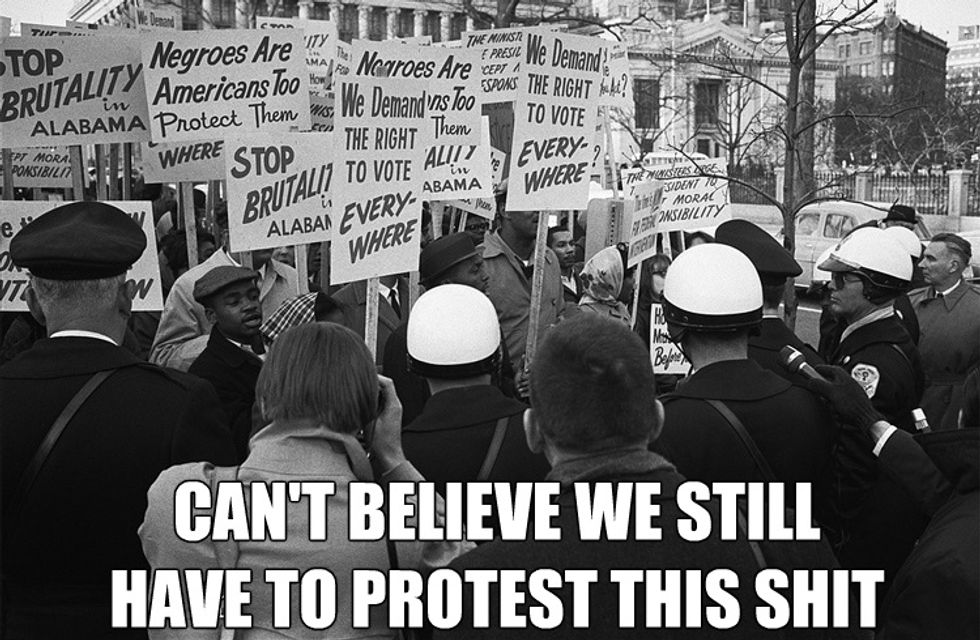 Well, Jesus. H. Jumped-Up Christ Marching Across The Edmund Pettus Bridge Into Tear Gas, they're at it again. Fine, not in Selma, but in Georgia, where the state is doing what it can to reduce the turnout for the June 20 runoff election for the 6th Congressional District seat formerly held by Secretary of Destroying Healthcare Tom Price. Democratic candidate Jon Ossoff may have been the top vote-getter in the primary Tuesday, with 48% of the vote, but that was just short of the 50% plus one to win outright, so Ossoff will face the next-highest candidate, Republican Karen Handel, in the runoff. Great! May the best candidate who can garner the support of the most voters win! Only there's a little catch: If Georgians want to vote in this election, which has suddenly become one of the hottest political stories in the country, they had to have registered by March 20, a full three months before the runoff.

Georgia Secretary of State Brian Kemp’s office insists the runoff is simply an extension of the primary held Tuesday, so obviously the registration cutoff for that primary is the final cutoff. Letting new voters register for the runoff would taint the purity of the vote, don't you know. The Lawyers’ Committee for Civil Rights Under Law is suing in federal court to have registration available until May 22, 30 days before the runoff, citing the National Voter Registration Act (aka the "Motor Voter" Law), which requires voters be allowed to register to vote in any federal election 30 days beforehand. Ezra Rosenberg, the co-director of the Lawyers' Committee voting rights project, says this is a no-brainer:

The National Voter Registration Act, passed in 1993, defines the word “election” based on the Federal Election Campaign Act. That 1971 statute defines an election as “a general, special, primary, or runoff election.”

Slam dunk, easy-peasy, get on with the registration and campaigning, and may the best candidate win, right? Oh, but there's a catch, and it's a beaut: A spokesperson for Kemp, Candice Broce, Georgiasplained in an email to Huffington Post that under Georgia law, voters must be registered for the primary election in order to vote in a runoff resulting from that primary. She also said the U.S. Constitution allows states to set restrictions on voter eligibility in federal elections as long as those same restrictions apply to state elections.

Phooey to that, says Ira Feinberg, an attorney assisting with the Lawyers' Committee lawsuit; on the conference call, he said the Motor Voter law "clearly pre-empts state law."

Phooey to your phooey, replied Broce at the Georgia AG's office, because "integrity of the elections" and stuff:

“The election system, which includes the voter registration database and electronic poll books, was set up in such a way that it necessarily depends on the runoff being connected to the underlying election,” she said. “Attempting to make a change to the election system this late in the process could result in serious complications to normal election operations.”

Kemp's chief of staff, David Dove, said the lawsuit is nothing but a "completely political effort to attack Secretary Kemp,” although those crazies at the Lawyers' Committee seem to think it might have more to do with allowing voters in Georgia the right to vote in a very important election that's getting national attention and generating far more public interest than the initial primary election, regardless of Secretary Kemp's reputation or feelings. Yr Wonkette is not an elections lawyer, but it seems to us that since the runoff is, in effect, the equivalent of a general election, and since federal law specifically defines runoffs as one form of election that can't have a registration cutoff farther out than 30 days, it doesn't make a bit of sense for registration for an election in June to have a cutoff date three months in advance.

Oh, sorry. We were using logic that assumes "letting people vote" is a good thing. Georgia's logic is clearly predicated on keeping too many people from voting, because what if the wrong kind of people decide they want to vote?

Yr Wonkette is supported by reader contributions, and we have no cutoff on when you can throw us money. Just click the little "Donate" clicky down below the article.