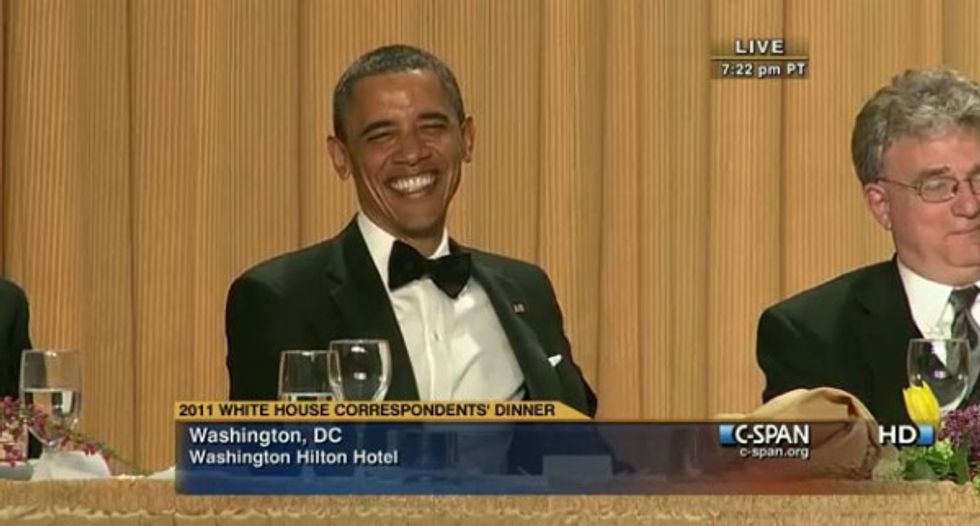 WAT WAT WAT. Twitter is saying that Osama bin Laden is dead, and President Obama is about to address the nation. Is Bin Laden already dead, or is Obama going to decapitate him live on the air, to stick it to the terrorists who are always doing that to our hostages? You would think he would wait for sweeps week, or maybe November 2012 to do something like this. THIS IS VERY EXCITING AND YOUR EDITOR IS PLANNING TO DRINK ALCOHOL AND CELEBRATE IN THE STREETS OF NEW YORK. Wolf Blitzer is being a pussy about this, but if Twitter says it's true, it must be. OSAMA BIN LADEN IS FINALLY DEAD. High five, diabetes or whatever did this to him.

10:42 PM -- UGH, HURRY UP, OBAMA. We will assume Twitter itself murdered Osama bin Laden, just like it overthrew the government of Iran.

10:44 PM -- Now CNN is reporting this. The U.S. "is convinced it has the body of Osama bin Laden." OH JEEZ, WHAT ARE WE GOING TO DO WITH IT? Can we put the head on a stake near Ground Zero? THAT IS WHAT PEOPLE ARE GOING TO WANT TO DO. WATCH THE POLLS, OBAMA.

10:46 PM -- Is there any way we can make George W. Bush president again for the next 20 minutes? That guy is going to be really sad he doesn't get to make this speech.

10:49 PM -- There's going to be a long segment of "People We Lost This Year" dedicated to this guy at this year's Terrorism Awards.

10:59 PM -- The terrorists are mad! That's why they retaliated by taking their number one target in America offline for 10 minutes: Wonkette.

11:02 PM -- People on Twitter tell us Bin Laden was killed, by America, a week ago, and did DNA tests in the mean time to make sure it was him. Makes sense. That's why all of Obama's speeches this week were, "Uhh, I have something really big I want to tell you guys, but I can't! Uhh, bye!"

FOR EACH OSAMA BIN LADEN THAT IS KILLED: Drink 13 beers.

11:11 PM -- Ed Henry is annoyed by those damn tourists shouting "USA! USA! USA!" outside the White House. Don't you people know he is on teevee, trying to keep from releasing any actual information to his audience?

11:14 PM -- Osama was LIVING IN THE SUBURBS. We think there was a Tom Hanks movie about this?

11:23 PM -- Seriously Obama, how did he not let this slip earlier? For example, when he was making jokes about Donald Trump last night? Or when he was releasing his birth certificate? He could have told people he actually does real things sometimes at his job!

11:25 PM -- Somebody texted your editor saying Brian Williams had to leave his guest spot at the UCB Theater improv show ASSSSCAT tonight to go on the air. THAT'S how big this announcement is, folks.

11:27 PM -- Chuck Todd says people are singing "We Are the Champions" outside the White House. We were just going to post that video! America is standing united again! Stick up your flags, everyone!

11:28 PM -- UPDATE: That ASSSSCAT thing was apparently a joke. The texter in question is no longer a friend now, and your editor regrets this error.

11:29 PM -- Obama has put off the announcement again. What a tease! Maybe he's dressing up the body in an embarrassing costume? HAHA, HIGH FIVE, OBAMA.

That's it! Election's over! We can call it! Obama wins!

11:33 PM -- UGH, but how could Obama kill him? He's a secret Muslim. This makes no sense! Wingnut heads are exploding.

11:34 PM -- This is actually quicker than most capital punishment carried out by America, to be fair.

11:37 PM -- Thanks for the Cliff Notes, Obama. We totally forgot about this war. We've had like seven since this all started.

11:41 PM -- There goes your fantasy of killing Bin Laden yourselves, America's country singers.

11:42 PM -- "Justice has been done." Oh shit! The movie is over! Obama is putting on his sunglasses and walking away in slow motion!

11:43 PM -- "America can do whatever we set our minds to." As long as it's killing people, we're really good at that. And as long as you give us a decade to get around to doing it.

11:45 PM -- Hey Obama definitely plagiarized that "indivisible, America, under God" stuff. Not sure where from, but we think we've heard it before.

11:49 PM -- Obama could not have put on any more sunglasses in slow motion as he walked away from that podium. Any. More. Sunglasses.

11:55 PM -- Also being sent around Twitter: Obama's face last night at the Correspondents dinner when a joke was made about Bin Laden:

This is what Obama looked like experiencing the greatest feeling of badassery in human history.

Earlier this evening, President Obama called to inform me that American forces killed Osama bin Laden, the leader of the al Qaeda network that attacked America on September 11, 2001. I congratulated him and the men and women of our military and intelligence communities who devoted their lives to this mission. They have our everlasting gratitude. This momentous achievement marks a victory for America, for people who seek peace around the world, and for all those who lost loved ones on September 11, 2001. The fight against terror goes on, but tonight America has sent an unmistakable message: No matter how long it takes, justice will be done.

This has to be the most bittersweet call Bush ever received. Even more than that time somebody called him to say they were out of cocaine at a party he was going to but they had plenty of beer.

12:05 AM -- So many people outside the White House! This is America's Mighty Ducks 4. We are the champions.

12:09 AM -- The Obama children are going to be on their BEST BEHAVIOR for the next few days. The guy is a little too badass to even be in the same room as for a few days without shitting your pants.