Get Ready For Your Boycott And Counter-Boycott, Dos Equis 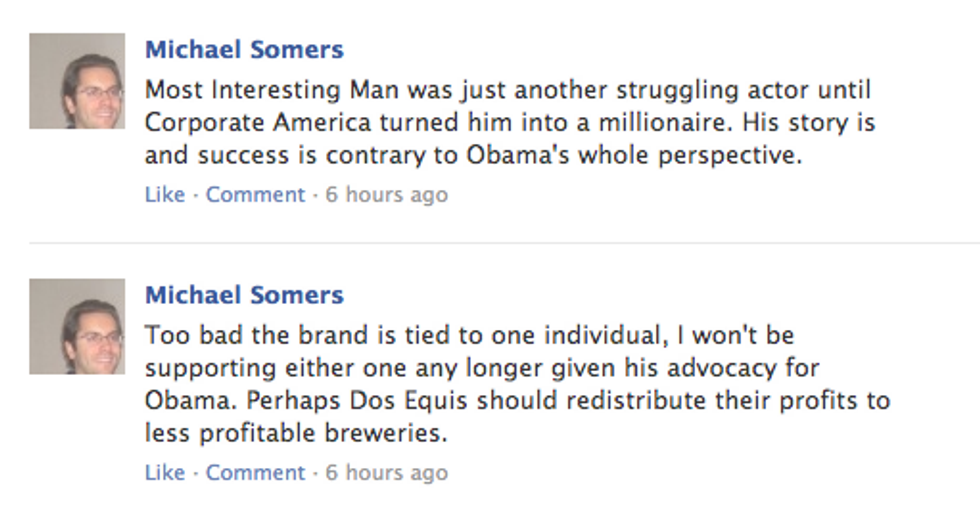 When the Most Interesting Man in the World holds a fundraiser for a certain Kenyan Anti-Colonial Marxist Communist Voodoo Witch, how do you think the Teatards feel about it? Happy? They feel happy, right? (Spoiler: They do not feel happy.) Well, we are getting to see this in action, because some sexy old beast is having a money-party for some other sexy beast, and so they are flocking to Dos Equis' Facebook page to promise never to buy their Messican beer again!

Dos Equis is smart enough not to let random fucktards post to their main page (they do have a "posts by others" section, unlike your Wonket), but that does not stop the random fucktards from adding pithy comments to Dos Equis' own posts. Let us read, oh, one, together!

Don C. Booker: I just had my las XX beer,. this bastard who claims to be the most interesting man in the world is an obama butt licker! Screw Dos Equis! Beer of Traitors..

Good comment, Don C. Booker! Apparently over half of your fellow citizens are traitors too, that must suck. Sadface!

Here are a couple comments by another dude:

But those two comments are followed by about a dozen that are all like, whoooo sexy old man and Barack Obama 4EVA, we will buy so much Dos Equis now whoooo!

And then there are a bunch more that Call Obummer a Communist, because whatever, who cares.

And that is what American politics has come to: hate-buying chicken and cupcakes and counter-hate-buying pizza and beer. We are gonna be even fatter, y'all.