Glenn Beck Knows Why The Walking Dead Is A Hit: It's The End Of The World And We Know It 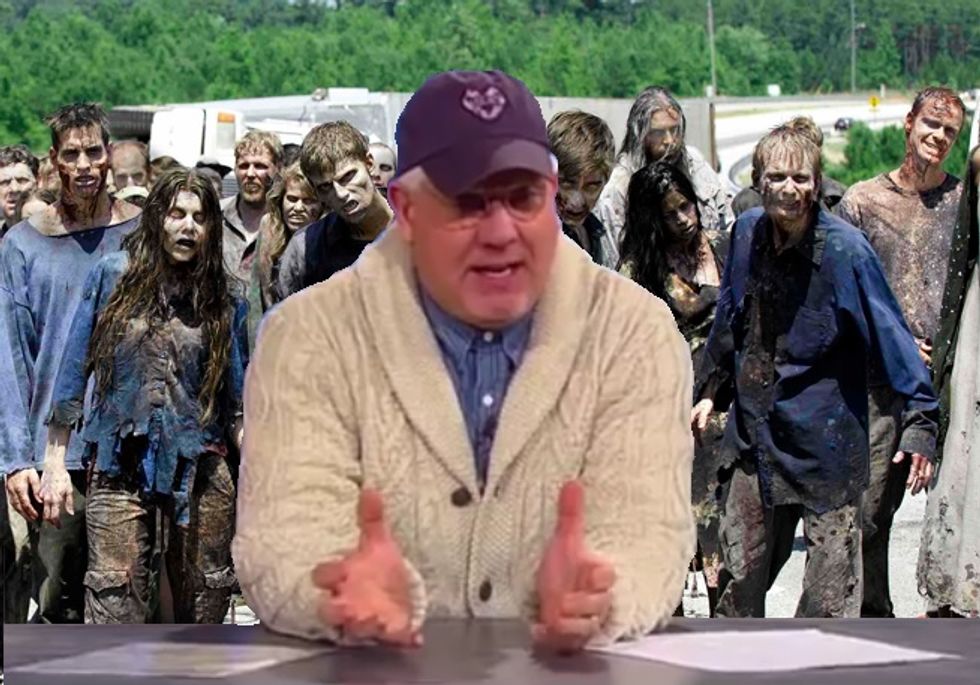 The shambling, dead-eyed masses lurched forward, drawn, some singly, some in groups, by some inexplicable impulse, to gather in herds of ravening, senseless hunger. They surged mindlessly without stopping, emitting guttural incoherent moans. Bereft of reason, they fed ravenously on the remnants of civilization, destroying everything in their path. It was August 28, 2010, and Glenn Beck's "Restoring Honor" rally at the Lincoln Memorial was a huge success. Frankly, we like Wonkette's descriptor for it better: "Glenn Beck's Miraculous Slob Picnic"

And then Monday night, Beck talked about the popularity of a cable TV series, explaining that The Walking Dead is a proxy for our fears of ISIS and the inevitable coming of World War III:

This is really some Classic Beck -- the man is a brilliant showman, a political Alice Cooper who, unlike the real thing, will never admit that it's all an act. Seriously, watch this sucker -- the camera work alone is a thing of beauty. You see, friends, the End of the World is definitely upon us:

And so it begins. It is here. I want you to understand, I am not charting a course for you, because all of the good ideas, the way we could have solved this, are all gone. I believe we are now in the early stages of World War Three.

Sure you do, Glenn. Just like in 2013 when you said the U.S. and Russia were on the brink of World War III over Syria and Edward Snowden and probably Miley Cyrus parading around in her knickers on a wrecking ball, too. Only now it's ISIS. ISIS is definitely starting WW III, for sure. And Glenn Beck shares with us a theory that he thought of and which is his, and this theory -- which is to say, the theory that he thought of -- is that the popularity of The Walking Dead is all due to our subconscious sense that the world is spiraling out of control! Never mind that this extremely original theory has been around to explain post-apocalyptic fiction as long as there's been post-apocalyptic fiction. This time it's really happening!

I think that we all know that the world is about to come undone ... We all know, there is something in us that tells us the world is out of control but I don't want to watch that. I don't even want to watch the news most nights. And so why are we watching The Walking Dead? We're watching The Walking Dead because we know the zombies aren't real. And so it allows us to connect with what we're really feeling but allows us to be in a safe zone because we know zombies aren't real. Zombies are ISIS. Zombies is our economic peril. The rest of the show is what we say is coming.

The thing is, for once, Beck isn't entirely wrong -- except for, of course, his "this is definitely happening now!" bullshit. We like end of the world stories because we're afraid of death, of the total end of everything, which is why the loony end-times fan-fiction written by John of Patmos still has a fervent following.

Yr. Dok Zoom is a big fan of the original, still-ongoing comic book version of The Walking Dead, which began publication in 2003 -- a pretty apocalyptic time, too. So, sure, Walking Dead is really good at tickling our psyches, but that probably has more to do with its being a brilliantly crafted horror story created by a really good, slightly sadistic storyteller, Robert Kirkman, who ramped up the suspense by making it clear from the outset that any of the characters we come to sympathize with can die at any moment, usually for the dumbest of reasons. The rest is just variations on a theme: Peril, brief victory, a moment of hope, and then the world falls to shit again.