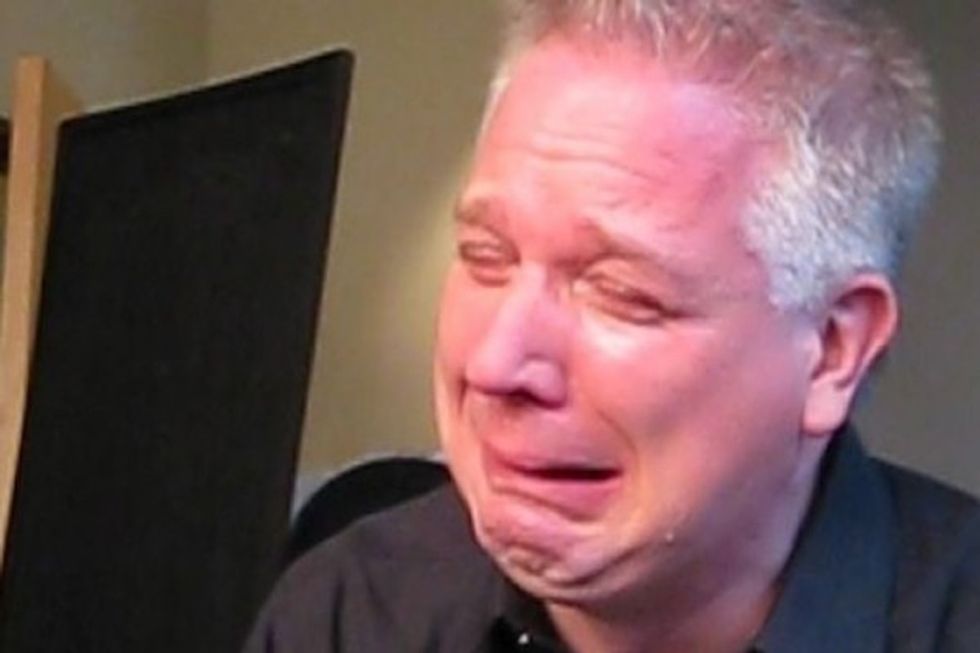 how many calories do you think crying burns?

Do you guys remember Glenn Beck? Gray-haired fellow, wept a lot? Preppy clothes? Opened his own weird America-loving clothing line, broke his brain? Not ringing a bell? Did we mention the part where he was a literal crying machine, so much so that we figured it had to be glycerin or an actual dry eye condition? See? Now you remember!

Glenn has been absent from the news cycle for a bit, which is weird when you think about how insane the news cycle has been this presidential season -- it is sort of custom-made for someone like Beck. Lucky for us, he has hurled himself back into our consciousness with a typically Beck-ian idea: we should all join him in fasting for Ted Cruz. Makes perfect se-- wait what???

“I would like to ask you to join me and my family Monday in a fast for Ted Cruz, our country and the Nevada caucus,” Beck wrote on his Facebook page after the South Carolina election results showed a decisive double-digit victory for Trump, whose candidacy Beck has been staunchly opposed to.

Well, we are obviously also too staunchly opposed to the candidacy of one Donald J. Trump, but we're not sure how starving ourselves will help Ted Cruz? Will Ted Cruz thrive by sucking up our energy as our life force ebbs away? Are we supposed to send the money we'd normally spend on food to Ted Cruz instead? Do we chew up the food first and then gently feed it, mouth-to-mouth, to Ted Cruz, as if he were a baby bird? Don't ask Glenn Beck, because he sure as hell doesn't know.

At a press conference in South Carolina this week, Beck speculated as to whether his presence on the campaign trail “helps Ted Cruz or not,” saying that he didn’t know, but felt compelled to “do everything I can” to help Cruz.

Well, that is a laudable goal, if we define "laudable" as "getting an unhinged Christian Dominionist-type person who believes that God told his wife he should run elected to the highest office in the land." Come to think of it, that is pretty much the opposite of what we personally might consider laudable, but toMAYto, toMAHto.

So, in conclusion, if you love Ted Cruz, you should starve yourself. Hmm. When you put it that way, this actually is a plan we can get behind. Thanks, Glenn!