Glenn Beck's Brain Is Broken. No, For Reals This Time 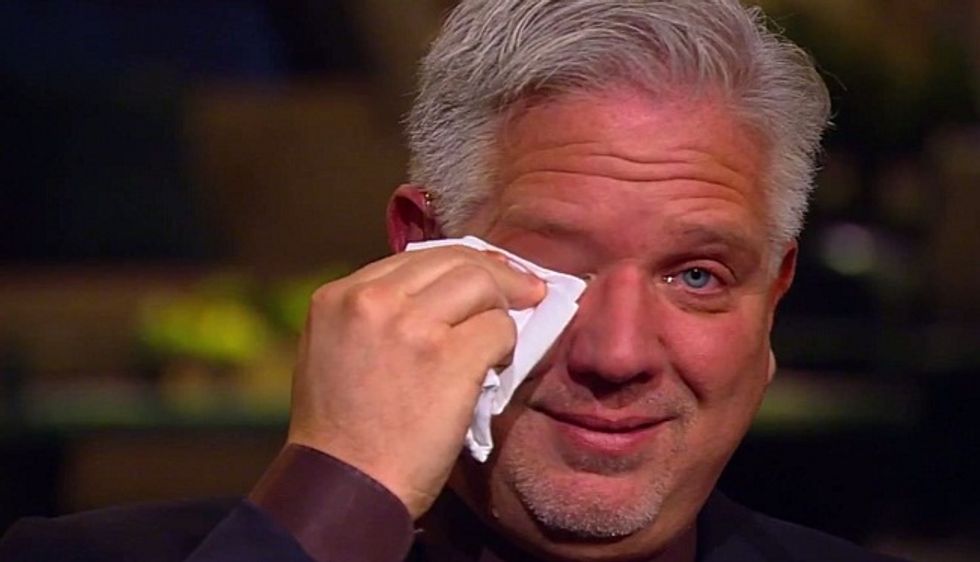 Glenn Beck took to the airwaves on Blaze TV Monday night for a dramatic revelation, and it sure was a doozy. Beck, who has not infrequently mentioned mysterious health issues over the years, revealed that he has been suffering from all manner of neurological illnesses.

Ah yes, look crazy. It must have been the illness that made Beck think he is Martin Luther King. And that Isla Vista mass shooter Elliot Rodger was a crazed Teddy Roosevelt follower. And to accuse an innocent man of attempted mass murder based on no evidence whatsoever. Or entertain the possibility that the missing Malaysian Air plane was hijacked by terrorists who have a super-secret cloaking device. Or that Hillary Clinton's first act as president will be hot lesbo sex all over the desk in the Oval Office.

And those are all just from the last few months, after Glenn Beck began getting treated for his strange neurological disease. Think of how crazy he sounded before he knew he was sick!

Beck went on to describe some of the symptoms that have afflicted him.

We didn't know at the time what was causing me to feel as though, out of nowhere, my hands or feet or arms and legs would feel like someone had just crushed them, or set them on fire or pushed broken glass into my feet.

Ugh. That does sound genuinely painful, and we are glad that Beck is on the road to recovery, even if we are having a little trouble believing that one symptom was occasionally paralyzed vocal cords. Please, Glenn Beck has never had paralyzed vocal cords a day in his life.

After years of doctors being unable to figure out what exactly was wrong with him, Beck visited the Carrick Brain Center in Dallas, where he underwent all sorts of unusual therapies such as getting strapped into a gyroscope and flipped around like an astronaut or Austin Powers being lamely tortured by Dr. Evil. Beck’s lucky to have made a pile of money so he can pay for all this treatment. We hope he’ll remember that a lot of people don’t have that kind of money the next time he wants to deride Obamacare as being the first step on the road to Nazism. Oh wait, that was probably also the illness's fault.

We also would like to believe his medical scare will help Beck be a little more credulous and sympathetic when a 74-year-old woman has a seizure, or a Secretary of State has a blood clot in her brain and has to postpone testifying about BENGHAAAAAZI!!!11!! Because sometimes people have actual, real health problems. But we’re pessimists.