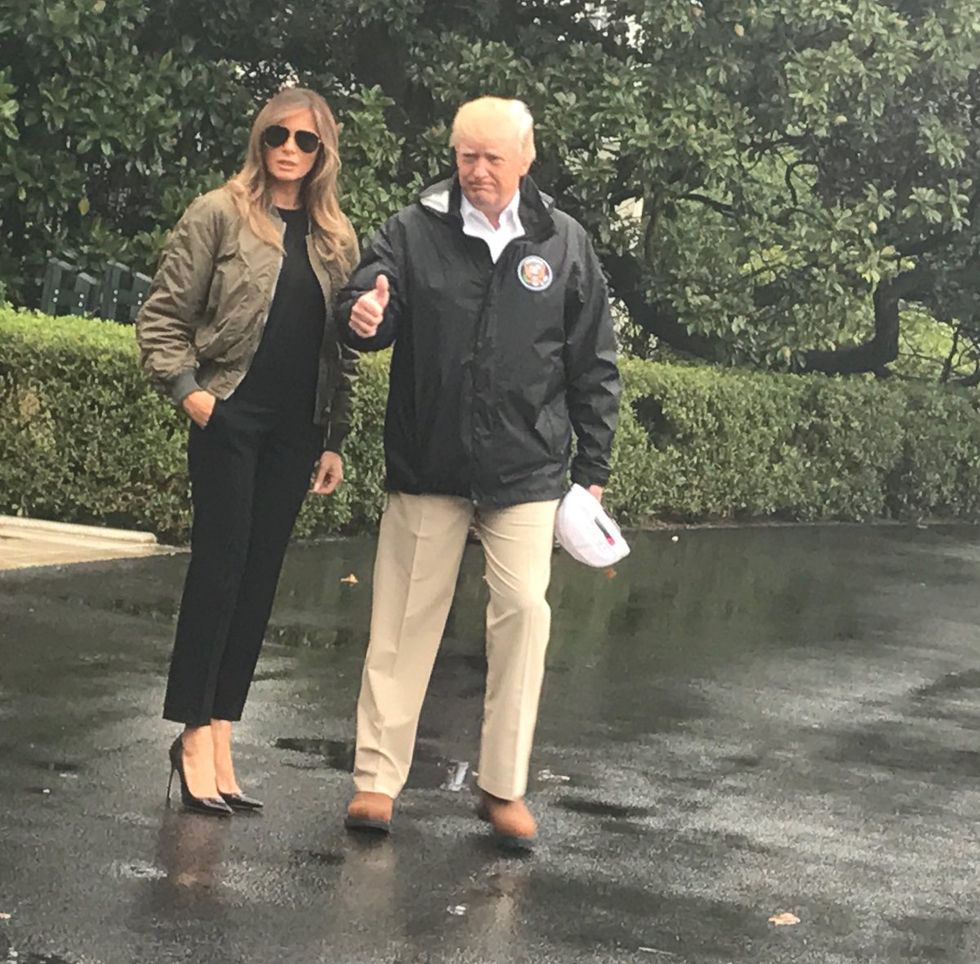 When we parked our car outside the Wonket Secret Chat Cave this morning, the FIRST THING we said to anyone was, "I'm worried Chris Cillizza just saw Trump get on the helicopter to go to Texas and thinks he just became president." We were thinking about Chuck Todd too. And Mark Halperin. And half the White House press corps.

And it was true that when Donald and Melania walked to the helicopter on the way to the airplane, they looked ALMOST normal, if you forget literally everything else that's happened before today. They were wearing clothes that weren't even gold-plated, so they could go visit the devastation in South Texas. Hopefully they don't find a way to visit even more devastation on South Texas.

God, all you beltway jackholes, we shouldn't have to say this, and we know the bar is REALLY LOW, but Trump isn't being presidential if he manages to visit Texas without dropping his own literal turds in the flood waters.

It was Glenn Thrush of the New York Times who wrote the offending article:

GLENN. Glenn, Glenn, Glenn! Glennforth Thrushington III! What the hell are you doing? Can you even see the stupid words you just typed?

Hurricane Harvey was the rarest of disasters to strike during the Trump presidency — a maelstrom not of Mr. Trump’s making, and one that offers him an opportunity to recapture some of the unifying power of his office he has squandered in recent weeks.

"Recent weeks"? Like the hundred some-odd recent weeks since he walked down the escalator in Trump Tower and kicked off his campaign by calling Mexicans rapists?

In announcing his trips, he used the dulcet, reassuring and uplifting language of prior presidents.

Dulcet? DULCET? Because he hasn't used any of his announcements to give Nazis a reach-around or brag about his Electoral College win, his tones are DULCET?????? Oh Jesus Christ, that is exactly ...

His rhetoric was strikingly different from his much-criticized pronouncements at a news conference this month when he equated the actions of leftist protesters in Charlottesville, Va., with the violent, torch-wielding alt-right activists who hurled anti-Semitic and racist epithets.

... what Glenn Thrush is fucking saying. Now, to appear "presidential," Trump must only refrain from saying Nazis Have Feelings Too. We've fallen that far.

Honestly, compared to literally any other president, Trump really hasn't done a good job responding to Harvey, "Heckuva job, Brownie" Bush notwithstanding. All his tweets about it have been of the "RAIN SO BIG!" genre, which, while scientifically accurate, is not exactly presidential. His public statements have basically been "it's going to be doing so much raining, you're going to get sick of raining." For instance, at his presser with the president of Finland, he said this:

Oh, and did we mention how Trump has been wearing his stupid fucking product placement "USA" hats, the ones the Trump Campaign is selling -- really, buy these instead -- every time he makes a hurricane-related appearance? Or that he used the occasion of the storm slamming into the Texas coast to pardon racist shitbag Joe Arpaio on Friday night, because he thought his announcement would get better "ratings" during the wall-to-wall hurricane coverage?

What the fuck is our debased standard here, Glenn Thrush? Is it that "it COULD be worse"? Well, sure it could! We suppose he could pluck children who look Hispanic out of the floodwaters and have them airlifted to Mexico. He could do lots of embarrassing things!

By any metric, Trump is doing the bare minimum that decency requires in this situation. He hasn't made hurricanes great again or anything. ANY PERSON READING THIS RIGHT NOW has the requisite experience to show up for a photo op, say, "Boy, rain! I don't know!" and then promise the federal government will do everything it can.

We do not care if Donald Trump puts a baby in a boat or Melania and her stiletto galoshes pose for a goofy picture with the Cajun Navy. Stop being so easily fucking impressed, please.

We think we have made our point. Glenn Thrush, we're sorry we had to give you shit for this, but oh well, you wrote the damn thing. Now go tell your friends Maggie Haberman and Maureen Dowd and Chris Cillizza and Chuck Todd that you've learned your lesson, and that they should also please STFU about hurricanes making people "presidential."

Wonkette salaries are fully paid by lovely souls like you! If you love us, click below to pay us!