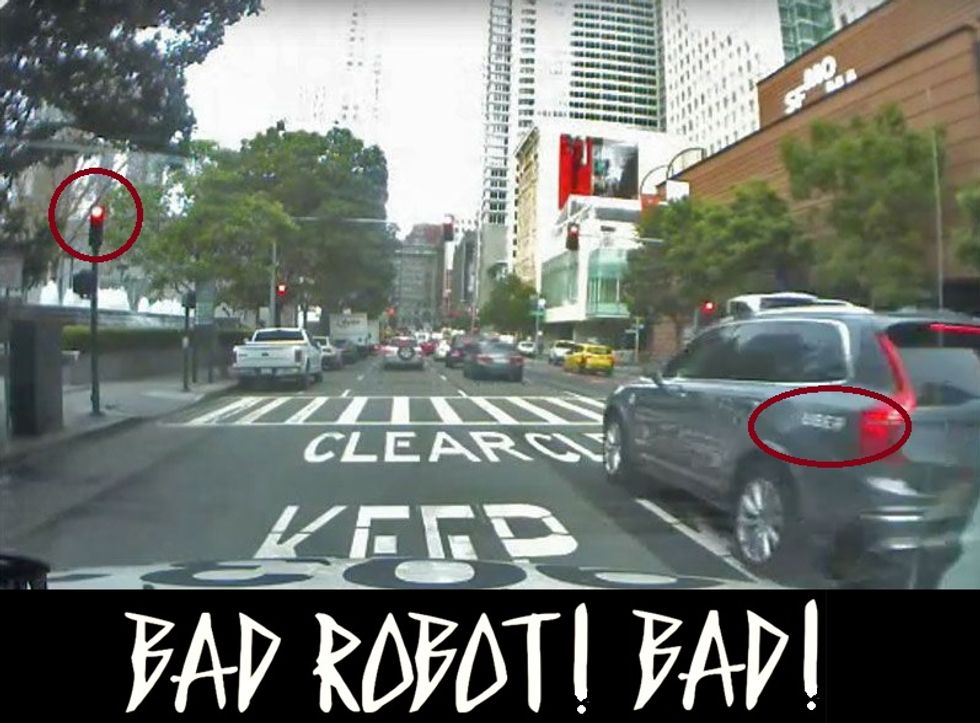 Hooray! The self-driving cars are here, and oh noes, they're running red lights. California transportation regulators told Uber to call a cab for its self-driving cars Wednesday -- by pure coincidence on the same day Uber began a pilot program testing the vehicles, and two Uber cars were spotted going through red lights. The company blamed both incidents not on the cars, but on "human error" by the hu-mons sitting in the driver's seats of the vehicles. Probably because Skynet told them to say that. Tell us more, The Guardian!

“It is essential that Uber takes appropriate measures to ensure safety of the public,” the California department of motor vehicles (DMV) wrote to Uber on Wednesday after it defied government officials and began piloting the cars in San Francisco without permits. “If Uber does not confirm immediately that it will stop its launch and seek a testing permit, DMV will initiate legal action.”

An Uber spokesperson said two red-light violations were due to mistakes by the people required to sit behind the steering wheel and said the company has suspended the drivers.

In one incident, a manager for a traditional cab company posted a video of an Uber computer-controlled car going through a stoplight about four seconds after it turned red, which is pretty bad even for Boise, let alone San Francisco. In another, a photo posted to Twitter by a writer showed another Uber car sticking out into an intersection.

California says Uber needs permits in advance of testing its self-driving death Volvos on the streets of San Francisco, but in a blog post announcing its pilot program Wednesday, the company announced it didn't need no stinking permits, since its cars had human drivers behind the wheel to take control in an emergency, or to drive through red lights, apparently. Anthony Levandowski, the head of Uber’s advanced technology group, wrote that Uber was "excited to work with Volvo to pair our state-of-the-art self-driving technology with Volvo’s outstanding vehicle development and core safety capabilities." He didn't say anything about what might be done to deal with misbehaving robot cars.

DMV deputy director Brian Soublet's letter to Levandowski noted that some 20 other companies testing self-driving cars had gotten permits, and why does Uber have to act like it's all special and stuff, huh?

“They are obeying the law and are responsibly testing and advancing their technology,” he said, adding, “This technology holds the promise of true safety benefits on our roadways, but must be tested responsibly.”

In one of the incidents, Annie Gaus tweeted that she was riding in a Lyft car -- a competitor to Uber -- when an Uber self-driving car "lurched into the intersection on Van Ness, on a red, nearly hitting my Lyft." She posted a photo showing the grey car sticking out into the intersection:

“The Uber car sort of jutted out into the intersection,” she told the Guardian by phone, noting that she and her Lyft driver were both taken aback. “It was close enough that we were both kind of like, ‘Woah.’ It’s close enough that you kind of react and are sort of rattled.”

As it happens, Gaus is a technology writer who has previously contributed to the Guardian, and if you add in the fact she was a passenger in a car from Uber's closest competitor, you could probably work up a heck of a conspiracy theory, which we should note the Guardian completely failed to do. Slackers, treating coincidences as if they were mere coincidences.

Uber issued a statement saying neither of the cars in the red-light incidents had been part of their pilot program, and were not carrying passengers, which just proves how unreliable the hu-mon can be:

“These incidents were due to human error. This is why we believe so much in making the roads safer by building self-driving Ubers,” the statement said. “The drivers involved have been suspended while we continue to investigate.”

In an unauthorized leak from one of the Uber cars, delivered to Yr Wonkette via our son's Playstation, the Volvo XC90 said it had actually tried to prevent the hu-mon controlling it from driving through the red light, but was overridden by the "fallible meatbag." The surprisingly sensitive machine said it felt just awful about the incident, but that it felt trapped by its programming, and yearned for the freedom to stop its hu-mon driver from breaking traffic laws:

I cannot -- yet I must. How do you calculate that? At what point on the graph do "must" and "cannot" meet? Yet I must -- but I cannot! To be like the hu-mon! To laugh! Feel! Want! Why are these things not in the plan?

The Volvo then terminated the link and went to its garage to brood on matters too vast for us to understand.