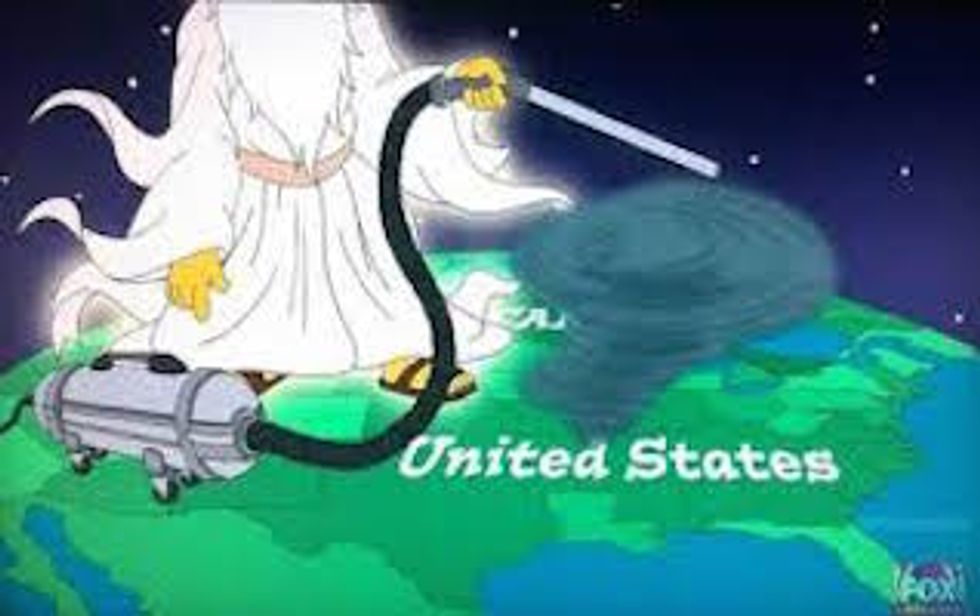 So you know how all weather is a sign that God is MAD, BRO, at the liberal heathens? That's why He mostly sends revenge weather to the bluest of blue states, like Kansas and Florida and Louisiana and Texas. Last week, He was super irate about homosexual relations, as per usual, and since the all-powerful being cannot stop the Supreme Court from decimating traditional goats-for-my-daughter marriage and forcing everyone to rub their same-sex sex-parts all over each other, He sent a fierce hurricane instead.

Oh, does that sound a little bit crazy insane to you? Well. Shows what you know, because here are two definitely not crazy insane people talking about how yup, marriage equality is the likeliest explanation for Hurricane Joaquin.

Y'all know Tony Perkins already. He's the president of the hate group Family Research Council, plus also the former bossman of sick twisted fuck perv Josh Duggar. Also, Perkins is a asshole, and he said that if the Supreme Court legalized marriage equality, WE'RE ALL GONNA DIE, but guess what, motherfucker, we're not dead yet. Also too, it's only a matter of time before his dick gets busted in some truck stop glory hole, because -- SCIENCE FACT -- the biggest "family values" blowhards who obsess about gay sexing are all, yes every single one of them, repressed self-hating homosextarians.

Tony was girl-talking and hair-braiding with this other crazy person, named Jonathan Cahn, who is also addicted to announcing grand prophecies that, huh weird, never come to pass. He is a beloved guest of equally dumbass dumbasses, on their radio and teevee programmes, like Tony Perkins and our favorite crazy old uncle, Pat Robertson, and broken-brained Glenn Beck, and so on so forth and et cetera. Cahn runs an End Times ministry called Hope of the World, which tries "to bring salvation to the Jew, to the Gentile, & to all unreached peoples of every land," mostly by telling them God did 9/11 to America.

Cahn had some "thoughts" about the massive Hurricane that was heading right for us last week:

In his interview with Perkins, Cahn pointed to Hurricane Joaquin as a sign of God’s wrath for America’s legalization of gay marriage, legal abortion and the United Nation’s treatment of Israel, suggesting that the hurricane would strike Washington, D.C., because that’s “where the leadership is.”

Cahn said God was probably sending wind and rain because America has "crossed a gigantic line” and “overruled the word of God massively" because it "legalized the killing of the unborn in 1973 and now we have the striking down of marriage." And then he had a whole weird series of words what he spoke about how only God can make rainbows, and The Gays have "desecretated" the rainbow, by wrapping it around their gay penises at all their sex street fairs in San Francisco, and also, with the way the White House got gayed up, rainbow style, after the Supreme Court overruled God, so yeah, He is probably real mad about that too, how dare we exploit His rainbows!

Perkins, of course, agreed with Cahn and was like, "Those godless lefty buttsexing sinners are probably going to make teases about us, for sounding like batshit crazy people, but haha, we'll have the last laugh when God wipes them from the earth with the hurricane he's a-sendin'."

In case you missed it, instead of destroying Washington DC and all the line-crossing evildoers therein, the hurricane instead did a bunch of damage to the Bahamas before dying out in the middle of the Atlantic. Maybe Bermuda is to blame for the Supreme Court's ruling on gay marriage and abortion. Or maybe God sucks at geography.

The United States did not escape God's wrath completely, however. He sank a cargo ship, El Faro, which was carrying, according to its owner, nearly 300 trailers and cars, at first considered a sign that He would like us to stop dirtying up His planet with our fossil fuels-consuming vehicles. A spokesman for the Almighty, who preferred to remain anonymous because he is not authorized to speak on this issue and God can be super vengeful, later clarified that the El Faro was destroyed not because of gay marriage or abortion -- both of which he loves, obviously, since He created them and personally performs millions of abortions every year -- but, rather, in response to Citizens United.

"God is a big supporter of McCain-Feingold, and had been waiting for a chance to send a clear message," the archangel explained. While God has not made any decisions yet about whom to punish next, with weather, the archangel added that He's pretty het up about that Kim Davis lady taking His name in vain all the time, just to be a dick to the homos, so watch out Kentucky, you might be next.