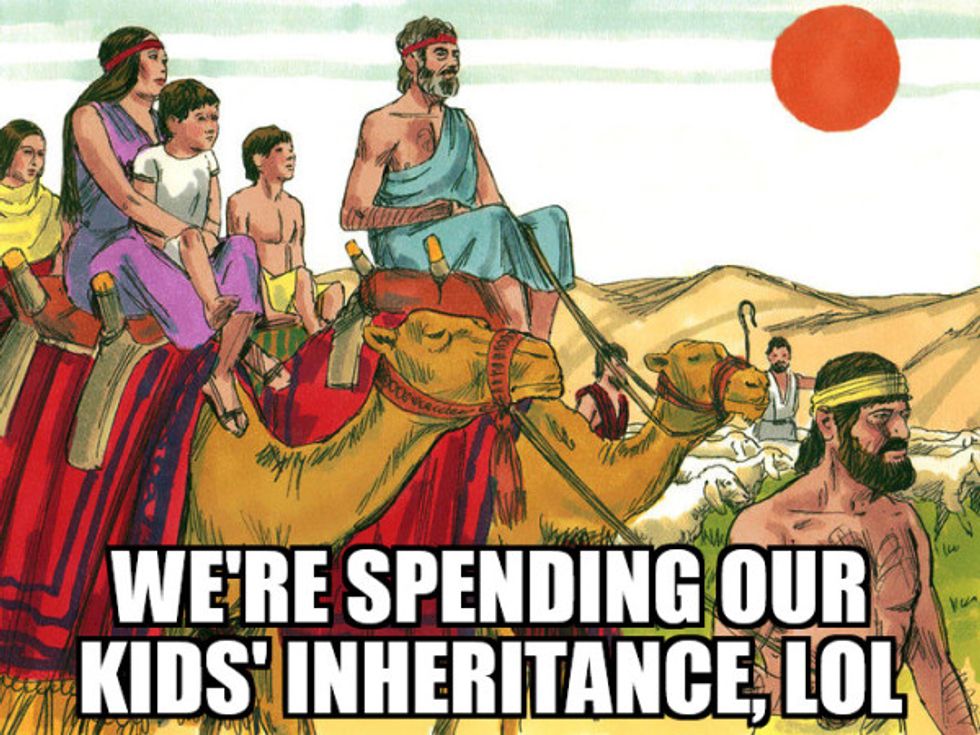 We're pretty sure that two examples makes for a trend (or at least it does at the New York Times), so it's officially time to call this a genuine wingnut epidemic: Citing the Bible as proof that God wants you to never retire, so please stop complaining if Social Security gets cut/eliminated, OK? The latest scholar to discover this important Biblical principle is rightwing fake historian David Barton, who explained Monday that retirement is a foreign, pagan concept that the One True God frowns upon, because Babylonians made it up.

Barton seems to be echoing Montana billionaire and fellow creationist Greg Gianforte, who explained in February that Noah never retired, even though he lived to be over 600; RightWingWatch notes that this "there's no retirement in the Bible" notion has also been pushed by rightwing Rabbi Daniel Lapin as far back as 2011. In the latest variation on the trendlet, Barton explained on Kenneth Copeland's "Believer's Voice of Victory" television program that the Children of Israel, and hence all Christians, must never, ever retire, lest they anger the Deity:

"One of the great indications that something is not part of what God wants is the fruit that accompanies it," he continued. "And one of the things that I’ve always believed is Deuteronomy 6:24, He says, 'Everything I tell you is for your benefit, that you can enjoy a long life, that you can prosper,' and so if we see something in the way of statistics or science that shows that we don’t have a long life, that will diminish our life, then we know that’s not part of what God wanted us to do."

You see, says Barton, a lot of people die within 2.4 years of retiring, according to insurance actuaries that Barton knows real good. So obviously, retiring makes you lose the will to live, and so God takes you. As Barton explains, "your body says, 'Oh, you want to do nothing? Great. Let’s just shut down.'"

Comes right down to it, says Barton, we're just not designed to not work -- in fact, to toil, as Genesis tells us.

Barton's math would seem somewhat at odds with the average lifespan in the United States being 79 years, while a 2014 Gallup poll put the average American retirement age at 62. The difference between those two numbers is 17 years, not 2.4, but maybe there's a whole crowd of Christians who work until 78 and then croak at their desks throwing off the average. Besides, math comes to us from the pagans, too, so shut up and pray.

Also, too, there is no way in the world that rightwing Christians' sudden interest in the fact that there's no retirement in the Bible could possibly be connected with extreme rightwing/libertarian proposals to eliminate or privatize Social Security. Pure coincidence, we bet. God works in mysterious ways.

And rightwing politicians in completely predictable ones.