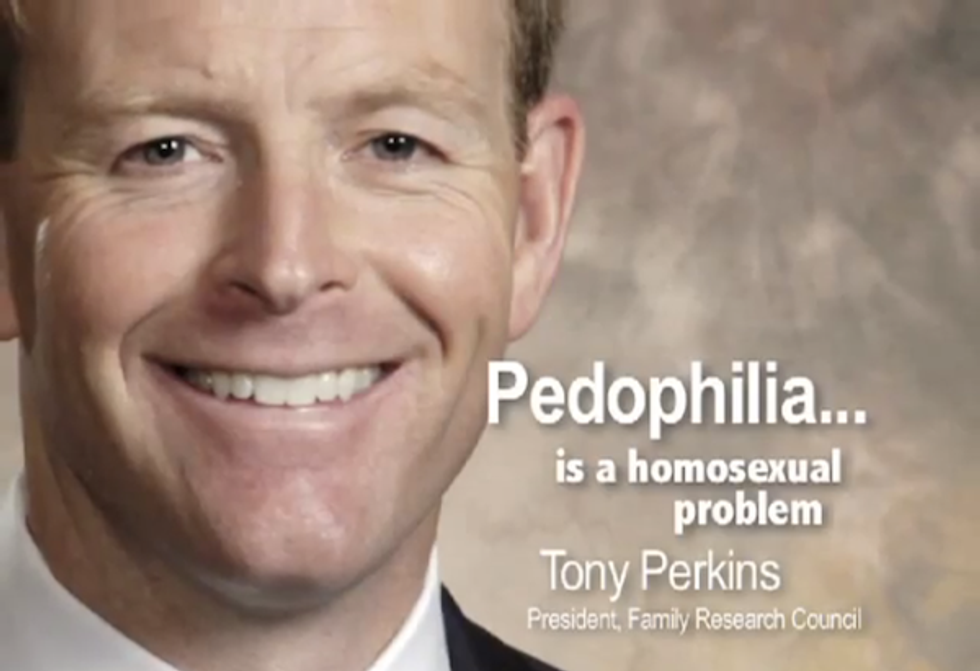 This is real, it's not some meme we made.

Guys, we are being slightly mean with our headline, which is something we never do. You know Tony Perkins, right? Biggest bigot in the known universe, or at least top five? Head of the viciously anti-gay and anti-woman Family Research Council hate group, who used to be Josh Duggar's boss? He thinks we're all gonna die because of the Supreme Court's gay marriage ruling, and that anti-discrimination laws amount to persecution against the REAL Americans, wingnut Christian Americans like him. He has blamed military suicides on the repeal of Don't Ask Don't Tell, and he bought his very first mailing list, for his Jesus career, from racist David Duke. Do you want to know everything bad about him? Luckily, our sexxxy pals at Right Wing Watch have compiled a list!

Tony Perkins is a dumpster fire among dumpster fires, and he has this really gay vibe going on, which is weird since severely anti-gay public figures never ever turn out to be mainlining man-crotch when nobody's looking. Nope.

Tony's house was destroyed in the Baton Rouge flooding. Here, listen to Tony call in to the FRC's Washington Watch radio program, to discuss the sadness with his former employee Ken Klukowski, who is now a Breitbart turd-goblin:

Perkins explains that he and his family had to escape their house by canoe on Saturday, and that it will probably take them six months to rebuild. The discussion posted above is full of a bunch of conservative Christian-ese bullshit about how people should rejoice in their suffering, and that's fine. Whatever works for you, and if that helps some of the flood victims make it through, who are we to judge? Nobody, is who.

What we want to highlight right now is the thing we alluded to above, about how Tony believes simple nondiscrimination laws to protect LGBT Americans amount to persecution and even "forced servitude" for poor, put-upon wingnuts like him. Do you know what is one of the most common features of nondiscrimination laws? If you guessed protection from housing discrimination -- i.e. the freedom from being denied housing because of who you love, or being kicked out of your house because your landlord doesn't like them homosexuals because Jesus said they are icky -- you were correct!

Now, we don't think God is trying to make some kind of karmic point to Tony Perkins, who calls it "religious freedom" for gay-hatin' bigots to be able to deny services, housing and employment to LGBT folks, by filling his home with water. For one thing, we're pretty sure God wouldn't destroy SO MANY THOUSANDS OF HOMES AND LIVES just to teach Tony Perkins a lesson. And we are not actually saying that God forgot to come upon Tony Perkins in a dream or through a burning bush, and tell him to build a big ark to save his family. God is a elephant who never forgets! If He wanted Tony to make a boat, He woulda said something.

Our actual point is that we are very fucking sorry that this happened to Tony Perkins and his family, the same way we feel about every other victim of these terrible floods. We hope they all receive the resources they need to rebuild their lives and their livelihoods, and we're glad to hear that Tony's family is safe and sound, even if the road ahead for them is hard. (Click here to find out how you can help victims in southern Louisiana!)

We just wish Tony Perkins was fucking sorry for all the victims destroyed by his own life's work, many of whom didn't have goddamned canoes to escape the proverbial floodwaters.