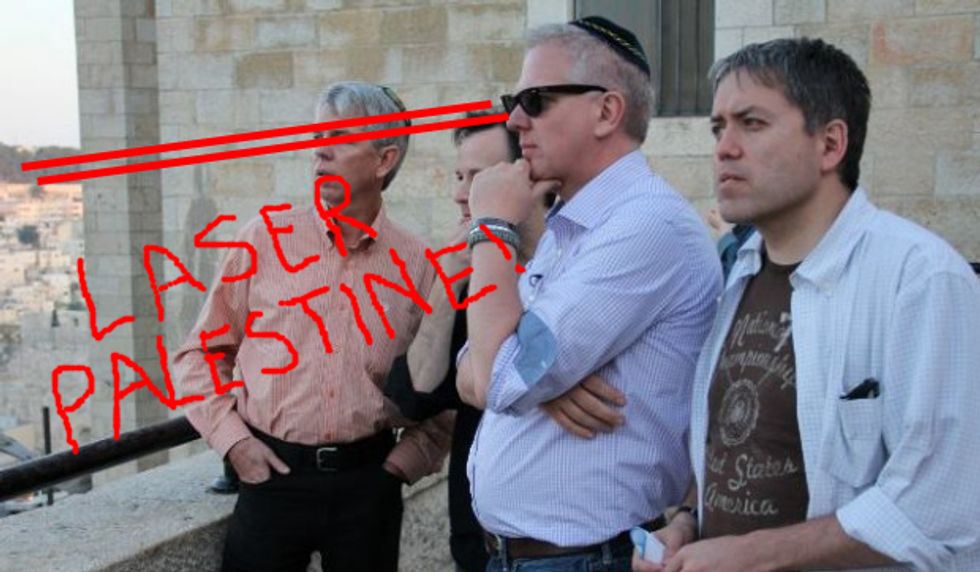 Sure, we can make jokes aboutthe world ending this Saturday, but there is suddenly ample evidence: God has chosen his most reputable media servant to go to Jerusalem and tell the Palestinians to stop existing. According to Glenn Beck, "evil" forces, the ones who so evilly allowed Arabs to overthrow their dictators, are washing into Palestine and will soon accomplish the most terrifying thing of all: peace between Israel and Palestine. NOOOOOOO! Not peace! The horror! God told Beck to hold a rally in Jerusalem to try to stop this. Hope you wingnuts can figure out how to get a passport. You and your trusty scooter got a rally in a foreign country (scary!) to attend.

Here is the rambling incoherence about a foreign policy matter that God wrote (READ UP MORE, GOD, THIS SOUNDS STUPID):

If Glenn Beck builds it, they will come. On scooters. With truck nutz. And a sidecar for their dialysis machine. To watch America's favorite new pastime, spewing hatred about Muslims.

(Does everyone hear the sound effects of people signing out of Glenn Beck's instant messenger application? God would probably prefer you had turned off your little chats, Glenn.)

This is terrible news for the U.S. economy. The Teabaggers are going to give what money they saved having their house foreclosed and declaring bankruptcy to Israel. Wal-Mart stock is going to plummet! McDonald's will do exactly the same amount of business, though, as every meal will still be eaten there.

We're totally on board with all of this! These people are definitely the ones who should be going over there to tell Israel and Palestine what's what. Too bad the world is ending. Otherwise, wingnuts would finally see how foreign Israel is and realize they actually hate it. [YouTube]