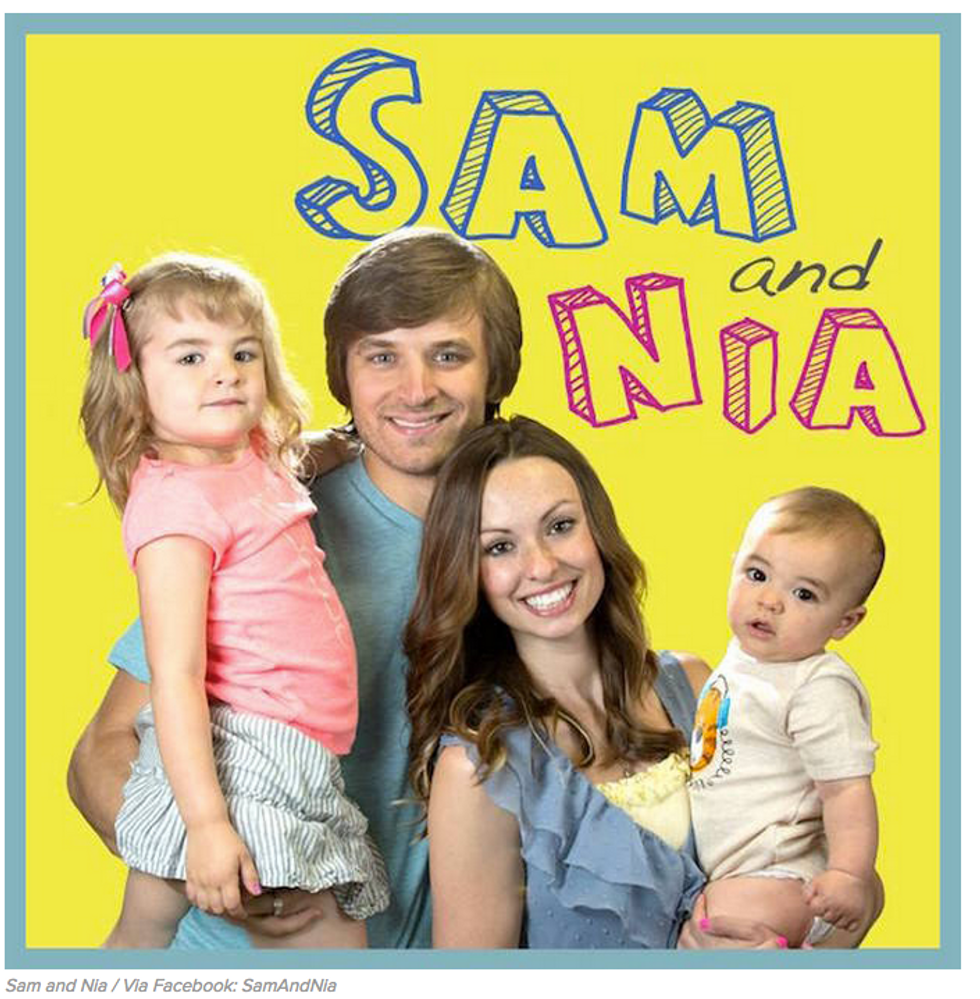 Just some good Christians lookin' to make a buck

You know how Jesus said, "Go forth and multiply and then try to get rich and famous for doing that?" Yes he did TOO, because look at all these good Christian families who make their whore diamonds by talkin' Bible stuff on the TV and the internets, everywhere like such as, ’bout how you should not do the sex before the wedding -- twice, at least! -- and how you should protect The Children from transhomogendersexians, but not from their finger-banging older brother, because that's different, and also Beyoncé is a whore, and Ted Nugent likes kittens a whole lot.

Well, America, is time to meet your new America's Next Top Christian Fame Whore Family, Sam and Nia Rader. These "devout Christians" were high school sweethearts, and now they are opposite-married to each other, with children, and they think they are real good looking. No, really, their launch to internet stardom began with a video they made called "Good Looking Parents Sing Disney’s Frozen (Love Is an Open Door)." And they have a YouTube channel all about "a small family of four pointing to a big God and vlogging it all... daily."

Because, see, it is Sam's dream to be famous. No, REALLY! "I’ve always had a dream to be famous," Sam said. Aw, that's nice. And profitable, too. BuzzFeed reports that "the couple likely earns $9.60 per thousand non-skippable ad views, which could easily lead to a six-figure salary for the channel if they can maintain even just a fraction of their recent numbers." Ka-ching and hallelujah!

One might think this good looking Christian couple would use their YouTube fame for Jesus-y things like caring for the least among us, but one would be a moron who doesn't understand how the Good Christian Scam thing works:

With their most recent success, the Raders have received tons of support and media attention, which they’ve seemed to enjoy – the day after announcing the miscarriage, they posted a video where they tried (and failed) to use their fame to get into Legoland for free.

When it didn’t work, Sam vented about the employee who denied them: “He didn’t even recognize the video so now we got a bunch of disappointed kids.”

Wow, jerk Legoland employee, don't you know who they are?!?! They're that nice good looking Christian couple from the World Wide Web, and you just straight-up murdered their precious kids' dreams of getting free shit, how rude!

Which brings us to, yes, their "most recent success."

The photogenic pair and their equally adorable children charmed the masses on YouTube after Sam revealed to his wife that she was pregnant — before she even knew it herself — by using pee she left in a toilet bowl for a pregnancy test.

Now, ladies, before you get your g-strings all in a bunch because those of us who have ever peed on a stick know that is not how you do a pregnancy test, don't worry, all the doctors in the entire universe have explained it too, all science-like, and why you should follow the directions on the box and then go to a doctor to confirm that you are, yes, pregnant. Which of course the Raders did not do, because they couldn't wait to tell the world about how they made another baby, even though Sam is an ER nurse, so maybe he should know better? Nah.

But then, sad, they lost the baby a few days later. And they made a video about that too. And while Nia may or may not have been pregnant in the first place, and may or may not have had a miscarriage, they believe it, or claim they believe it, so yes, that is sad for them (but not so sad that they can't stay focused on the big picture of reminding you to watch their videos). Also, these two rocket scientists believe all kinds of dumb things, like how Nia was about six weeks pregnant with the maybe baby, which they say was the girl kind, even though that's not the sort of thing you know that early in the pregnancy because -- well, it's about half an inch long and looks something like this:

Sam admitted that they never bothered to confirm whether Nia was pregnant, because maybe they were too busy making videos of themselves, including the one in which they are both crying and Sam is saying how he is very sad, but also glad God has chosen them to make viral videos to spread His message. You know, the standard Good Christian messages all Jesus-loving fame whores like to spread:

On July 2nd, 2015, Sam and Nia Rader uploaded a video to their YouTube channel titled "Kids React to Gay Marriage" in which they ask their [five-year-old] daughter, Symphony, what she thinks about two men/two women wanting to marry each other. Symphony believes that homosexual couples should be able to marry "if they want to." Unhappy with the answer and despite her being visibly uncomfortable, Sam goes on to coerce her into agreeing gay marriage is wrong by carefully rephrasing his questions and replacing man/woman with more specific "daddy" and "mommy" labels[.]

Aw, they seem nice! Of course they removed the video and said they were really sorry about trying to get rich and famous by coaxing their kid into saying gays shouldn't do marriage to each other. Please still give them money and clicks, OK? So they can keep spreading the Good Word about themselves and, oh yeah, God too. And boy, that God sure works in mysterious ways, because apparently, the day after they posted their video about their maybe baby maybe miscarriage, God told Sam to quit his job to make all the videos all the time to make all the money and get all the fame!

Or maybe not. Because BuzzFeed says "his employer, Texas Regional Medical Center, refuted the idea he quit." Oh, hmmm.

When BuzzFeed News contacted the hospital, a human resources spokesperson confirmed that Rader has been employed at the hospital since February. However, she said there was no record of him quitting and as far as the hospital knows, he still works there.

When asked how long it would take for HR to receive an employee’s two weeks notice, the spokesperson said it varies but usually doesn’t take more than 48 hours.

Rader told BuzzFeed News that this discrepancy probably means the hospital must not have processed his paperwork yet. He added that he is technically still on the schedule for this week as part of his last two weeks of work, but that he called out because of his wife’s miscarriage.

Yeah, that's probably all that happened. God forgot to file the paperwork is all.

Anyway, this new charming Christian family seems real nice, we hope all their prayers come true, and they get all the money and all the clicks so they can tell the world how beautiful they are, and Jesus says this and that, and just in case they ever say something real offensive and no one wants to watch their videos anymore, well, there's always GoFundMe, where they can whore for sympathy dollars from their fellow Good Christians.