Goodbye Ruby Tuesday, You Are Getting Crap Sued Out Of You 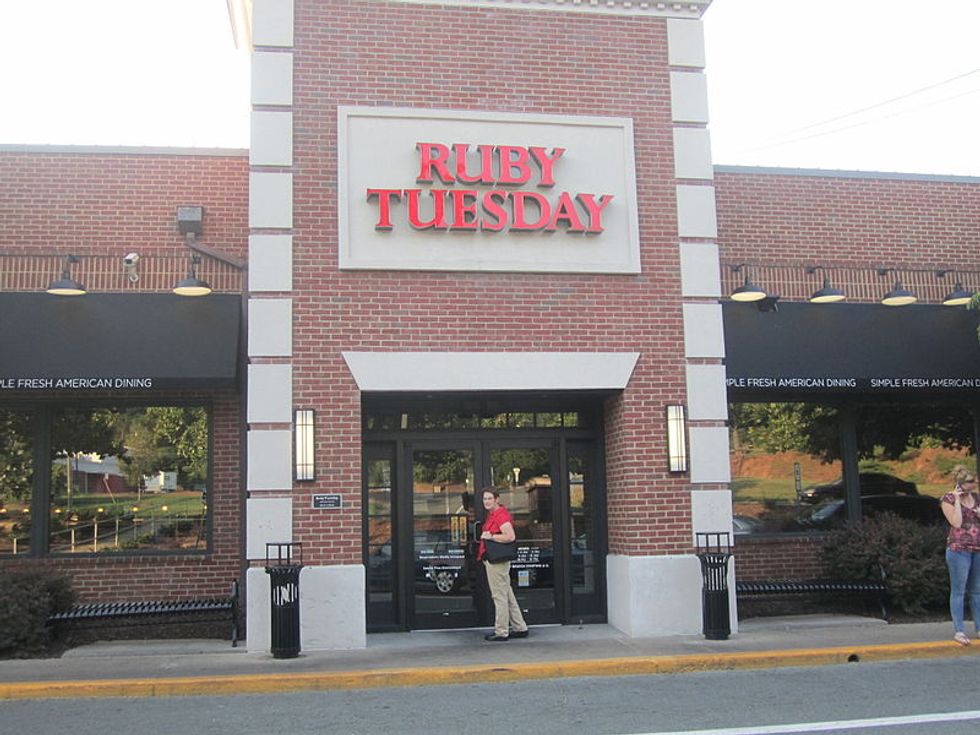 A class action lawsuit filed on behalf of every single server and bartender who worked at Ruby Tuesday in the last three years claims that Ruby Tuesday violated the law by paying servers the sub-minimum wage. While normally, restaurants are allowed to pay servers the shitty, regressive, no-good, very bad sub-minimum wage, it turns out there's some fine print Ruby Tuesday should've looked up. See, what restaurants aren't allowed to do is make servers spend too much of their time on the clock doing side work, and Ruby Tuesday, well, they done been naughty boys and girls.

Wait, What Is This 'Side Work' You're Talking About? You Mean Like Dealing Drugs Out The Back Of The Restaurant?

No, typically we would refer to that as "finding a way to pay rent." Side work is completely unrelated to illicit narcotics deals: it's work servers have to do that is unrelated to serving, and it's typically done after they're done taking tables but before they're allowed to leave. As far as what constitutes side work, rolling or wrapping silverware is the most common activity, but it's far from the only one. A by-no-means-complete list of various activities it can include (and bear in mind that depending on the restaurant, it can often include many of these at once) can be found here.

"Wait," you might say. "Aren't servers paid $2.13/hour in most states because tips are supposed to make up the difference? And they can't be getting tips while doing side work, so ... aren't they working for a flat $2.13 per hour at that point? That sounds really brutally unfair and awful." Congratulations! You are more morally sound than the idiot lawmakers who allowed the tipped sub-minimum wage to ever happen. We wouldn't get too excited by this -- goldfish have more moral fiber than many of the people legislating wage law -- but it's true all the same.

Here's the point where plutocrat apologists love to claim that if the servers aren't making minimum wage, the restaurant has to make up the difference, so no harm no foul. Then they smirk so hard they become punchier than Ted Cruz, and that shouldn't be physically possible.

Except, this is complete crap. See, pay isn't calculated separately for each and every hour. As long as the server's overall earnings add up to the minimum wage over their entire pay period, they can be forced to clean the inside of the nasty soda fountain, take out the garbage, or do battle with the magical ketchup cow for an hour for free before they're allowed to go home to their hovels.

There is one rule relating to side work, however: restaurants in states with a sub-minimum wage (remember, eight of them don't have one) can't force employees to spend more than 20 percent of their time on the clock doing side work, and it's this rule Ruby Tuesday's is accused of running afoul of.

We believe the accusations, too. Many, many, many, many, MANY restaurants make servers work more than 20 percent of their time doing side work. The vast majority of them get away with it largely because servers either don't know the law or accept it as a standard part of the job. If everyone is committing a crime, why would anyone think it's illegal? At that point, it's just an unavoidable part of reality.

So Ruby Tuesday Is Taking The Decent Approach And Admitting Wrongdoing While Settling With The Servers, Right?

Hahahahahaha, oh, how we laugh. Ruby Tuesday's is refusing to back down:

Ruby Tuesday denies the charges, and in a statement says it looks forward to its day in court, where lawyers "will be providing a vigorous defense of the company on this matter."

Either that's posturing in preparation for a settlement, or Ruby Tuesday's might want to rethink that. It's incredibly rare for a court not to side with the plaintiffs in excessive side work cases -- if the companies in question aren't smart enough to settle first. Darden, the slave-labor-sourcing Snidely Whiplash of the restaurant industry, has actually been one of the aforementioned companies too stupid to settle, and have paid a price for it.

We kind of hope they don't, though. Seeing Ruby Tuesday have to pay through the nose for all the wages they've stolen from workers over the last three years would in some small part make up for all the times we had to go there as a kid and eat from that damn salad bar.