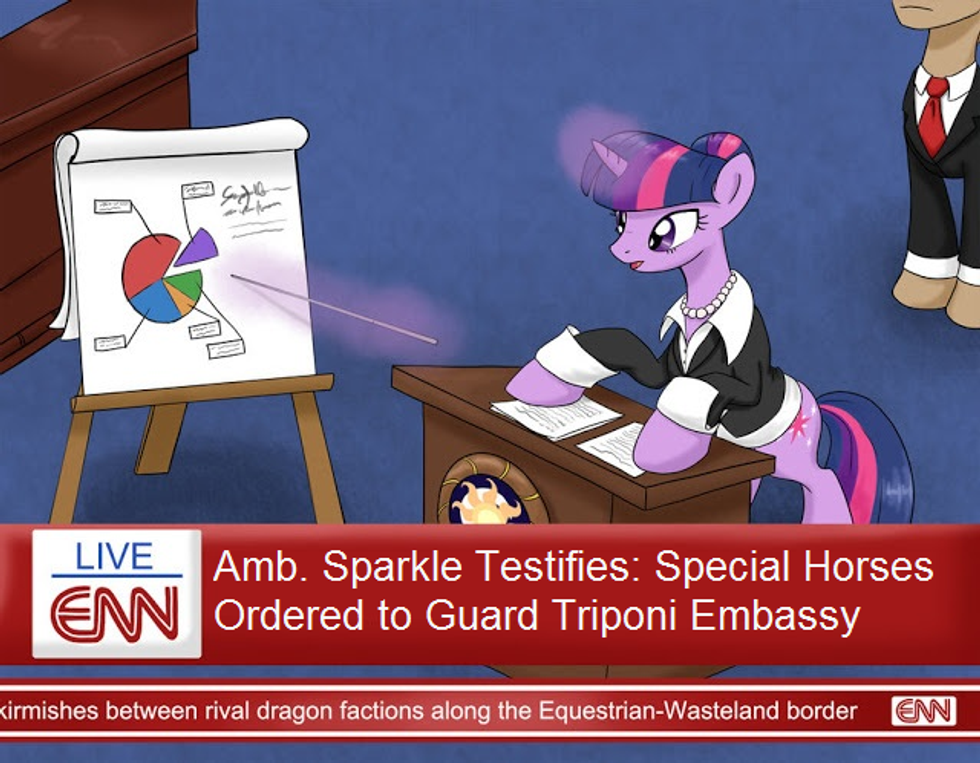 The GOP-ledhearings on Benghazi have started, and so of course it's time for Barack Obama to just resign already, isn't it? Or get impeached? Surely these hearings will be the last nail in his coffin, since they will definitively establish that during the attacks, Barack & Hillary just sat around painting each other's toes and watching Gossip Girl while Brave Americans Died. Also, Obama very definitely told would-be rescuers to "stand down," because he's incompetent/weak/a secret Muslim who loves terrists, etc., and there's no other explanation, right? So what did we find out from the whistleblowers?

Not a whole heck of a lot, and nothing to back the wingnut conspiracy claims. Not that this really makes a difference of course, because there's all sorts of nuance to ignore.

Think Progress has a nice rundown of guns that didn't smoke, and WaPo's liveblog of the hearings is also pretty good; we'll just focus on a couple of highlights here. Prepare yourself, dear readers, to not be shocked!

The biggest dealio, in our opinion, is that even in hearings run by people who would love to Get Obama, the hearings should -- but won't -- put to rest any idea that a rescue mission or airstrike could have saved the four Americans who died. The timeline simply doesn't support it. And it turns out that even Gregory Hicks, the Deputy Chief of Mission at the Tripoli embassy and star witness who claims he's bein' oppressed for his brave whistleblowing, was just plain wrong in his belief that military assets were available to scare away the Libyan militia, thus preventing the two deaths that occurred the morning after the initial attack. Before the hearings, Hicks had said

"I believe if we had been able to scramble a fighter or aircraft or two over Benghazi as quickly as possible after the attack commenced, I believe there would not have been a mortar attack on the annex in the morning because I believe the Libyans would have split."

Except it turns out that Hicks was engaging in the same wishful thinking that we've seen on Fox News again and again -- the miracle fighter planes that weren't actually available for a mission with dubious chances of success. As WaPo's liveblog notes, Hicks' speculation was undercut by Elijah Cummings (D-Md.), who "gently took Hicks through parts of his testimony" and pointed out that it was, well, kinda bullshit. (We like that "gently," because it reminds us of a favorite bit from The Wire.)

And, oh, golly, it turns out that Hicks' estimates of how quickly fighters could be sent to buzz Benghazi were based on embassy staffers' best guesses as to the flight time from the nearest U.S. base in Aviano, Italy. Questioned by Cummings, Hicks admitted that he had no reason to doubt Gen Martin Dempsey’s statement that it actually would have taken 20 hours to get fighters from Aviano to Benghazi, because they would need to refuel, and no tankers were in range that night.

Don't expect such blah-blah details to make any difference, because we all have seen enough movies to know that jets can be scrambled from anywhere to anywhere at a moment's notice, and they always blow away the bad guys, DUH.

The other Great Benghazi Scandal is that there was a four-man "special forces group" at the Tripoli embassy whose leader was chomping at the bit to go to Benghazi and kick some ass -- but instead, the group was told to "stand down," which surely is treason, right? Except, once again, there are dumb details that get in the way. It sounds awful, after all:

When he was ordered by the Africa Command not to go, Hicks said, the officer angrily told Hicks that “I’ve never been so embarrassed in my life that a State Department officer has bigger balls than someone in the military.”

Except, by that point? There's probably very little that the four special operators in Tripoli could have done, and they were not simply told to stand down and sit around with their thumbs up their butts -- they were ordered to stay in Tripoli to provide security for the evacuation of staff from Benghazi that was already underway at that point. From WaPo again:

At the Pentagon today, spokesman George Little said that when Special Operations Command-Africa received the call from the lieutenant colonel, the Benghazi mission had shifted to evacuation mode rather than protection, and the lieutenant colonel was told “to continue providing support to the embassy in Tripoli.”

“We continue to believe there was nothing this team could have done to assist during the second attack in Benghazi,” Little said.

Again, this will not make a lot of difference to wingnuts, who will continue to insist that a small team of lightly armed special forces could have somehow stopped a mortar attack from killing the two Americans who died in the second attack. As previously noted, that's just plain fantasy. And of course, the only thing that Ghost Breitbart says about this detail is that the hearings confirmed that "'stand down' orders were given while the Benghazi attacks were in progress."

Oh well. We still get to INPEACH over Bin Laden's son what did the Boston bombings that Michelle Obama visited in the hospital so they could share a terrorist fist bump, right?