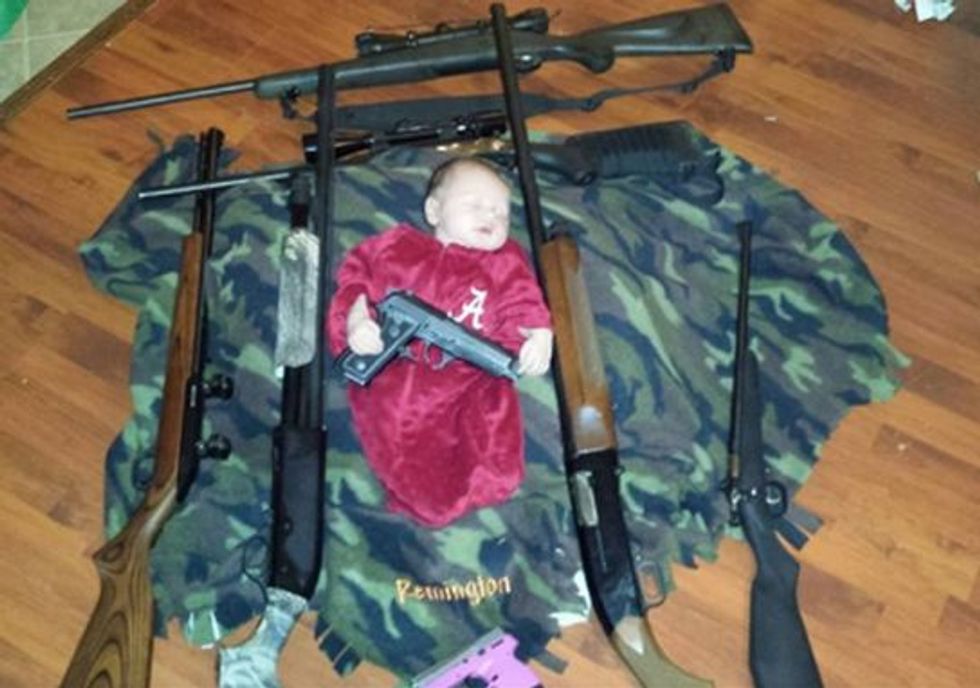 Three gunmen of the dumbpocalypse

[contextly_sidebar id="IRNym4YfUIFqhpcAcFbfLOUsKfkbOAsg"]Since nobody actually watched the GOP undercard debate Thursday (at least, not sober), most people probably missed the evening's most insistent reality denial on guns. Fox Business anchor Trish Regan mentioned Barack Obama's recent executive action to slightly expand background checks, and added, "But recent polls show the majority of Americans are in favor of universal background checks." The audience booed, because that's obviously just not true. Regan repeated, "It's the poll data..." and Carly Fiorina triumphantly replied, "And we all believe the polling data all the time, don't we?" HUGE APPLAUSE, and the liberally skewed polls vanished in a puff of gun love.

[contextly_sidebar id="fMyGtM3PONPiX0JtmUIdCGeJVCHPsq0s"]Mere facts fared no better at the alleged grownups' debate. Jeb Bush suggested that since the FBI failed to turn up Charleston shooter Dylann Roof's prior drug charges, we don't need to tighten background checks:

We don't need to add new rules, we need to make sure the FBI does its job. Because that person should not have gotten a gun, should not -- would not have passed a background check. The first impulse of Barack Obama and Hillary Clinton is to take rights away from law- abiding citizens.

Now, part of Obama's Tyrannical Gun Grab Plan involves hiring more FBI agents to do background checks. But according to Jeb, we shouldn't do that, because we really need to "make sure the FBI does its job." Got it.

Donald Trump got to hold the Stupid Ball next, and he had a whole bunch of little words to say on the subject:

I am a 2nd amendment person. If we had guns in California on the other side where the bullets went in the different direction, you wouldn't have 14 or 15 people dead right now.

If even in Paris, if they had guns on the other side, going in the opposite direction, you wouldn't have 130 people plus dead.

A normal human being might say something about armed civilians taking out the bad guys (it's a myth, but is at least a recognizable phrase in English), but somewhere in the tribble-filled cavity that passes for Donald Trump's mind, "bullets in the different direction" is impressive rhetoric.

Somehow, Marco Rubio topped Trump's impressive moron act. Neil Cavuto pointed out that if Barack Obama wants to take American's guns away, he's doing a really crappy job of it, since "under his presidency, gun sales have more than doubled. That doesn't sound like a White House unfriendly to gun owners." Oh, but that only proves how terrible Obama is, said Rubio:

That's pretty good: Obama must be planning to take everybody's guns, because just look at all the paranoids buying guns (not that fact-checking matters, but Obama keeps insisting he doesn't want to take your guns, which only means he's lying). Rubio added that no shootings ever could have been prevented by tighter gun laws, because no bad guy ever buys a gun from a licensed dealer or a gun show. Leaving aside the Roof example, proposals to prevent straw purchases probably would keep a lot of guns from being passed on illegally. But they might be inconvenient, so forget it.

Rubio was just getting started, of course. Since Obama wants America to be defenseless against radical Islamic terror -- he just does! -- we need even more guns, but the president won't let us have them, so please go buy more guns:

You know, to get those bullets moving in the other direction.

Chris Christie offered the presidential-sounding insight that the Bill of Rights is arranged in order of importance:

Obviously, keeping British soldiers from being quartered in our homes is therefore far more important than the right to a trial by jury. We're glad to have learned that. Christie also got big applause for explaining that Barack Obama is a "petulant child," but real Americans won't put up with him anymore:

The American people have rejected your agenda and now you're trying to go around it. That's not right. It's not constitutional. And we are going to kick your rear end out of the White House come this fall.

You might think the 22nd Amendment (which Christie may have ignored since it's so far down the list) had more to do with Obama leaving office, but Christie is apparently unaware that Obama isn't actually running.

Ted Cruz knows how to stop mass shootings: yell about Fast and Furious, which resulted in no mass shootings, and then warn that Hillary Clinton will stack the Supreme Court with justices who will rescind the Second Amendment. Also, Dianne Feinstein said something about rounding up guns, so there.

Ted Cruz is the kindest, bravest, warmest... oh, fuck that.

Our favorite, though, was this bit about former Attorney General Eric Holder, who Cruz said "viewed his mission as brainwashing the American people against guns."

If you want to get into mere stupid truth, Holder was actually talking about reducing violence among everyone's favorite scapegoat, inner-city youths. And he wasn't attorney general at the time; he was U.S. Attorney for the District of Columbia. Still, in talking about reducing violence in DC, Holder did talk bout changing attitudes, which is exactly the same as MIND CONTROL:

"What we need to do is change the way in which people think about guns, especially young people, and make it something that’s not cool, that it’s not acceptable, it’s not hip to carry a gun anymore, in the way in which we changed our attitudes about cigarettes," Holder said. He later added, "We have to be repetitive about this. It’s not enough to have a catchy ad on a Monday and then only do it Monday. We need to do this every day of the week, and just really brainwash people into thinking about guns in a vastly different way."

See? Holder wanted to brainwash the American people, if by "the American people" you mean young men in DC who think having a gun is cool. And if by "brainwash" you mean an aggressive advertising campaign. PolitiFact generously rated Cruz's statement "half true." So let's hear it for Ted Cruz's mad debating skillz: He turned an effort to reduce "black on black crime" (the only gunplay Republicans disapprove of) into proof that Obama wants to take your precious guns away.

After that, the debate turned to why Ted Cruz thinks Donald Trump is trying to brainwash America with New York Values, and then Fox went to a commercial that tried to brainwash us into buying stuff. It must be working: we're feeling very sleepy, and we'd prefer a nice game of solitaire to thinking any more about Ted Cruz.