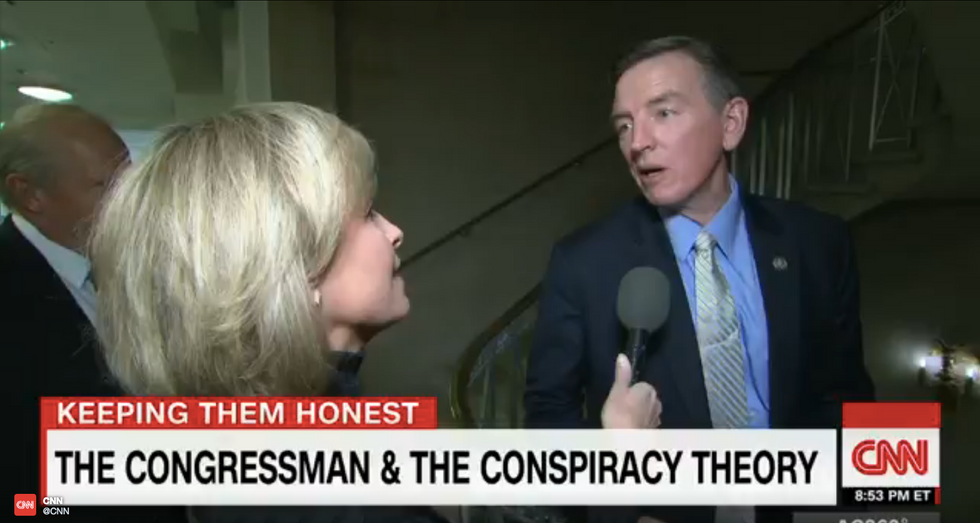 Ever notice that about 99 percent of the people who go around screaming about the mainstream media being "fake news" are also people who also believe in completely bizarre conspiracy theories? You know, like our Birther president who thought Ted Cruz's dad helped assassinate John F. Kennedy? Or perhaps Arizona Congressman/dentist Paul Gosar, who has recently been making up some very weird stuff about George Soros.

Earlier this month, Gosar did an interview with Vice News in which he claimed that it was possible that Charlottesville was funded by Soros, and that George Soros -- a Jewish man who was 14 when the Holocaust ended, and whose family pretended to be Christian in order to avoid being sent to a concentration camp -- was a Nazi collaborator who turned other Jewish people in.

VICE News: In fairness, antifa is in the news because of a white supremacist rally in Charlottesville.

GOSAR: Well, isn’t that interesting. Maybe that was created by the Left.

VICE News: Why do you say that?

GOSAR: Because let’s look at the person that actually started the rally. It’s come to our attention that this is a person from Occupy Wall Street that was an Obama sympathizer. So, wait a minute, be careful where you start taking these people to.

And look at the background. You know, you know George Soros is one of those people that actually helps back these individuals. Who is he? I think he’s from Hungary. I think he was Jewish. And I think he turned in his own people to the Nazis. Better be careful where we go with those.

VICE News: Do you think George Soros funded the neo-Nazis who marched in Charlottesville?

GOSAR: Wouldn’t it be interesting to find out?

Arizona Congressjerk Will Save Grand Canyon From Barack Obama And Tyranny

Oddly, his theories did not go over well with everyone. In fact, seven of his own siblings wrote an op-ed decrying his statements and disassociating themselves and their family from his beliefs.

Gosar has been pretty tough to nail down since then, but CNN finally caught up to him on Wednesday.

When asked about his comments by CNN reporter Randi Kaye, Gosar at first said that reporting on them was "fake news" because he only said "wouldn't it be interesting" if that were the case. Which, I suppose you could say about anything, really. Like, I'm not saying it's the case that Puff the Magic Dragon is real and does, indeed, frolic in the autumn mist in a land called Honalee, but wouldn't it be interesting if it was?

It would, of course, be very interesting if George Soros were somehow behind the Unite The Right rally. It would mean, I suppose, that George Soros predicted a Trump win many years ago, and created an entire army of young white men to pretend, for years, to be white nationalists on the internet, for the purpose of later organizing a rally in which a bunch of them would participate, which would then make Donald Trump look bad. Or like, he pretended to be a Nazi himself on the internet and turned a bunch of people into Nazis, for the purpose of making Donald Trump look bad in several years. One of those two things! He then funded said rally with millions of dollars, which is how they bought all those tiki torches. The tiki torches were very expensive, from Crate and Barrel or something, so obviously they needed Soros millions to afford them. That would all be very interesting, were it true.

Gosar did eventually double down on his theory and insisted that "proof was coming" and would be on his website later in the day. Said proof still is not on his website, probably because it is very hard to find proof for stuff you just made up yourself.

Kaye pressed him, noting that his theory had been "debunked," to which Gosar responded "It has not been debunked, absolutely not debunked whatsoever. So stay tuned," and then literally ran away yelling FAKE NEWS, like a normal adult congressman who has just had his pipe dreams crushed by a reporter on live television. America!