GOP Congressladies Would Like To Stop Talking About Legitimate Rape Please 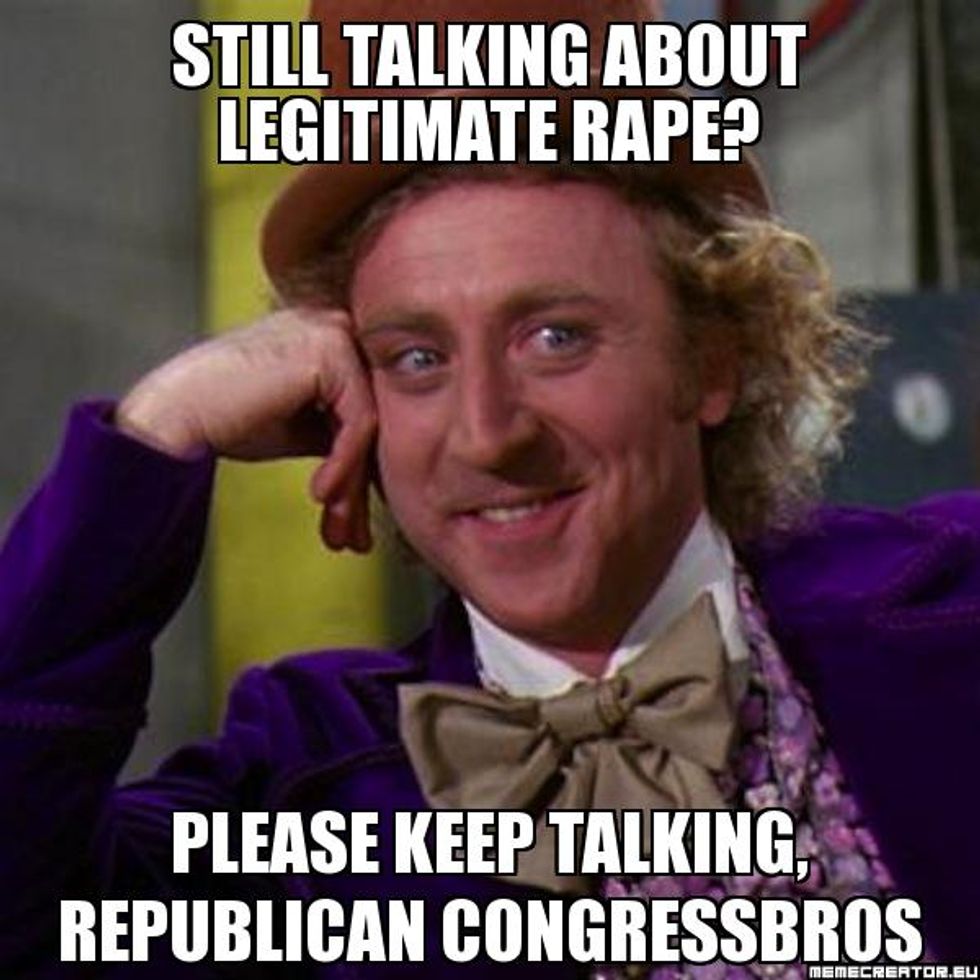 On Thursday, which happens to be the 42nd anniversary of Roe v. Wade -- what a coincidence! -- the House will vote on H.R. 36, the Pain-Capable Unborn Child Protection Act, a bill that would ban all abortions after the 20th week of pregnancy, except when the life of the woman is physically at risk, or in cases of rape or incest where the woman has reported the rape or incest to the police or another appropriate government agency. Just to be clear, Republicans are still making a distinction between "crime rape" where a stranger rapes you and you go to the police (that kind of rape is "legitimate" rape, and so we suppose you should be allowed to have an abortion), and partner or marital rape, where you might go the police, but you might not, because it's complicated (that kind of rape is way less legitimate, and probably it wasn't even rape, and it should not qualify you for an abortion, because you are probably just lying that your boyfriend raped you, and that's why you didn't call the police).

Yes, it is a brand-new Congress, but we are sad to say that we are still talking about "legitimate rape." Republican Congressbros still haven't learned that Ladies (and Men, too!) hate this Republican parsing of the concept that not all rape is a crime, or perhaps not all forcible sex is rape. Even Republican Congressladies aren't on board with this part of the bill. Really? Yes, really.

Republican Congressladies are so NOT on board with making this type of rape distinction this go-round that although they both voted to pass this exact same bill last year, Reps. Renee Ellmers (R-NC) and Jackie Walorski (R-IN) have expressed concerns about the rape provision and have have asked to be removed as cosponsors of H.R. 36. National Journal, citing sources who attended a closed Republican meeting, reports that Ellmers said last week:

"I have urged leadership to reconsider bringing it up next week.… We got into trouble last year, and I think we need to be careful again; we need to be smart about how we're moving forward," Ellmers said in an interview. "The first vote we take, or the second vote, or the fifth vote, shouldn't be on an issue where we know that millennials—social issues just aren't as important [to them]."

[contextly_sidebar id="9d2xYsS6P2UW2lWQepN9xjWwfzK9Kj8S"] Well, not exactly "concerns about the rape provision" so much as "concerns that people will stop liking them if they keep being Republicans who are unsure about what rape is," but whatever, baby steps. So Republicans know that their rage-y anti-choice stance got them "into trouble last year," and they know millennials will hate this bill, but they are telling themselves that it is because millennials don't care about social issues? That is so cute. Millennials totally care about social issues, plus, according to a recent Pew report, 56 percent of them are pro-choice, but that's okay, Republican Congressladies, we support whatever fig leaf you would like to don in order to justify your decision to disassociate yourselves from this legislation.

In addition to bringing up the issue of legitimate rape again, the text of the bill states that "there is substantial medical evidence that an unborn child is capable of experiencing pain at least by 20 weeks after fertilization, if not earlier," which has not been determined to be the case by doctors or scientists, despite Republican politicians' strong feels on the subject. And of course the Republican congressladies have no problem with that part of the bill.

The House passed this bill last year and will pass it again, and the Senate will probably pass it, too. Sen. Lindsey Graham (R-Running for President? Me??) has said he plans to introduce it. But don't even worry, because the White House has already said President Obama will give this bill a legitimate veto smackdown. We guess when Speaker John Boehner and House Majority Leader Mitch McConnell said in November that they wanted to start small and score some early legislative victories, what they really meant was "pass some controversial and alienating anti-choice  legislation," or something like that. Tomato, tomahto.